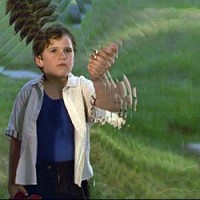 I started watching the Predator series because I knew that the creature would eventually do battle with the title character from the Alien franchise, so perhaps it should not be surprising that I’ve viewed the films so far through that lens. Which is to say that, while watching the Alien movies, I’ve been consistently impressed and entertained by how each successive director brings their own flavor to the material, taking the creature to new places and introducing it to the audience in exciting ways, all while maintaining a sense of continuity between the films. I’ve been anticipating a similar effect here, so when I learned that the second in the Predator series starred Danny Glover in place of Arnold Schwarzenegger, and was set in the mean streets of Los Angeles as opposed to the jungles of Central America, I couldn’t help but be intrigued. It’s inarguably a bold direction to take the character and the series; I went in with high hopes.

Those were quickly dashed. The movie opens in 1997 (though it was released in 1990), on an L.A. all but taken over entirely by roving groups of murderous gangs. Though the police attempt to hold back these criminals by having bloody shoot-outs in the street, the only person who can really do anything about the carnage is Lt. Mike Harrigan (Glover), who easily swoops into the middle of the action, blasting baddies with a bazooka like it’s nothin’. Harrigan is so committed to catching the bad guys that he repeatedly ignores his superiors’ orders not to enter barricaded buildings – a statement on his rogue nature – even if it means that other good police officers get killed in the process. Those are unnamed, minor characters so don’t worry, Harrigan won’t receive any sort of censure for his foolhardiness. At worst, he’ll receive the old “You’re a loose cannon, Harrigan!” speech, or even if he does get stripped of his badge for these antics, you just know it ain’t gonna stop him from continuing the chase.

The Predator has shown up in L.A. to watch the violence from the rooftops. The film attempts to explain its presence somewhat by putting Gary Busey in the role of a secret government agent who knows all about the creature and is attempting to track it. He explains that the Predator is drawn to heat and conflict, although this doesn’t provide any clues as to why it seems to be following Harrigan in particular, or how it happens to know where gang violence is about to go down in order to show up at the exact right time to make a grand entrance. I know I’m taking the film too seriously, that this incredible happenstance is not a product of legitimate planning and logic by the creature itself, but instead an indicator of what the screenwriters found convenient. It’s convenient if the Predator is wherever we need him to be at any given time, explanations of how or why it got there be damned.

It’s always difficult to avoid responding to a film for what you wanted it to be versus what it actually is. Though, truthfully, I’m not sure how the seed got planted in my mind that there was error in that approach. Why is it wrong to hold disdain for a film because what it could have been is so much greater than what is actually presented? Maybe the movie was only trying to be a mindless action fest (as in the original Predator, particularly), but even if it accomplishes that, what glory is there in being purposely thoughtless and excelling at it? What honor is there in intentionally ignoring philosophical issues and then crying “that was the idea all along”? I see none.

So once again, Predator 2 suggests that the creature places value on the lives of the innocent: it does no harm to a child, even though that child is holding a toy weapon, and leaves Maria Conchita Alonso (of Vampire’s Kiss fame) alone because it can sense her purity. But other questions are raised by the creature’s ability to record and play back soundbites, in an appropriate context, when needed. This seems to indicate that the creature has at least a rudimentary understanding of the English language. Does it understand all languages? Does it know the language intrinsically, or was it learned? Later in the film, there are strong hints that the Predator is a creature which has achieved a high level of technological advancement, which has been visiting the Earth for centuries, and whose species maintains a society and culture. Most probably won’t view the film and see these as shocking revelations about the creature itself, so much as thrilling twists that keep the plot turning, but until now we’ve only seen the creature existing independently. To now inform the viewer that the Predator is a social creature that houses itself in large groups and has technology that extends far beyond its ability to track and hunt prey… this changes the game entirely. As analogy, when we hear of “Bigfoot” sightings, they are typically lone creatures seen from afar. Now imagine if you were told that, actually, the “Bigfoot” lives in a complicated underground system of tunnels and nests with hundreds of similar creatures, and that they have an economic system and a language of their own. This is how much Predator 2 ups the ante, yet much like its predecessor, it refuses to address any of this sincerely.

Instead, it’s all action sequences and gunfights. Glover and his team (including both Alonso and the ever-obnoxious Bill Paxton) scour the city, trying to find clues as to what is killing off the city’s toughest gang leaders, sometimes getting picked off by the Predator themselves. We get an attack in a high-rise penthouse, complete with naked chick running around screaming during the mayhem; we get a strobe-lighted subway attack, which mirrors a lot of the action in the original film by having the good guys just firing randomly into the darkness; we get a tense sequence in a slaughterhouse, the scene lit by blue-tinted ultraviolet lights to add an edge of creepiness to the events. I’m not saying that these action sequences aren’t enjoyable (though the “dramatic” scenes in between are awful – every line is a clunker). What I’m saying is these action scenes do not make enough of an impact to create a voice for the film that is otherwise missing. If nothing else, the original Predator had a stunning final battle that had Schwarzenegger tussling with the Predator in the mud. Predator 2 doesn’t even have that.

Unlike the Alien series, which infuses each new installment with a unique vision for the creature and for its main hero, it appears that the Predator series has no vision. It only wants to ride on the coat-tails of the creature itself, thinking that by putting the Predator in the movie, that alone is enough to make it a hit. It speaks to the fallacy of that theory that it took twenty years before anybody attempted a Predator movie again.