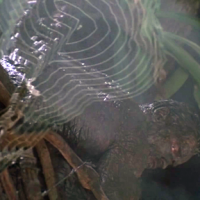 When dreck like Michael Bay’s endless Transformers sequels are released, the critical panning goes without saying. Sure, there will be the few who try to defend such messes by trotting out such tried-and-tired arguments as: “It’s just a movie! Turn your brain off and enjoy it!” Those few voices will be summarily dismissed by the hive-mind of the critics, the argument unconvincing; being an action extravaganza does not in and of itself clothe mindless filmmaking. Yet everybody with whom I’ve spoken about 1987’s Predator – a testosterone-driven action flick all the way – have responded with unbridled enthusiasm. Friends, co-workers, even my grandmother have all expressed their reverence for the film. Is it nostalgia alone which drives this tendency, or is there something more there that I missed? From where I sat, the film was a joyless slog through 90 minutes of random gunfire and wheel-spinning, until a climactic battle which finally gives the film a voice.

The film opens with a shot of an alien starship plummeting to Earth, followed by a quick introduction to our cast of interchangeable action hero types. It’s true that stars Arnold Schwarzenegger, Carl Weathers, and Jesse Ventura are all recognizable and therefore individualized by virtue of their personas, but none have a – to use that word again – voice of their own. The characters are all one-note, as is the action. What compelled me to dive into the Predator series is having recently sped through the Alien franchise. Knowing that the two creatures would eventually wage war against one another, I wanted to fully understand the politics that informed this epic battle. Compared with its soon-to-be challenger, Predator is disappointingly slight. As its unknown menace stalks the jungle tracking our musclebound heroes, the slow revelation of its many “powers” doesn’t play as well-constructed dramatic reveal, but instead as randomly placed injections of surprise to artificially extend the film’s pay-off.

The pay-off is the Predator itself, which is why the climax makes for a much more exciting and memorable 10 minutes than the entirety of what came before. It’s finally a one-on-one battle, the monster versus the hero, and when both parties throw down their gloves and duke it out is when it finally feels like there’s something at stake. That is, once this final battle has concluded there can only be one man left standing, whereas earlier the easy removal of characters who are not Arnold Schwarzenegger meant little. There’s an early scene where the group of soldiers sneak-attacks the base-camp of an opposing group of human soldiers, and it’s clearly meant to be viewed as a thrilling spectacle. Instead, it’s loud and broad and uninteresting; it’s the thoughtless movement of pawns, bullets being fired haphazardly in place of any sense of warfare tact or ingenuity, ultimately uninteresting because the moment means nothing.

What’s especially frustrating is that the film fails to capitalize on the one thing that sets its monster apart from other strong-but-silent supernatural villains: its intelligence. The movie repeatedly suggests that the Predator is not merely an aggressive animal, but instead a creature with comparable intelligence to its human counterparts. That the creature refuses to attack those who do not have weapons indicates that it has a moral framework that dissuades it from instigating an “unfair” fight. Let me just repeat that to let it sink in: this murderous alien has a moral code. It’s clear that the Predator doesn’t hunt the humans for sustenance or as a survival instinct – this is merely sport to it. Once again, that this alien creature is patient enough to observe its opponents before attacking, that it takes the soldiers on as a way of entertaining itself, these are provocative concepts that absolutely set the film apart from similar titles. At best, the aliens in James Cameron’s Aliens (released the year before Predator hit theaters) have a level of intelligence similar to the velociraptors in Steven Spielberg’s Jurassic Park –  able to utilize simple deductive reasoning, yet a slave to their animal instincts when it push comes to shove. By constrast, the Predator doesn’t become vulnerable as a result of the humans’ carefully laid traps, but instead because of pride and arrogance. We’ve been taught to view our movie monsters as unthinking killing machines – that this creature possesses characteristics which we would usually view as unique to humanity is an inspired twist.

And yet all we get is glimpses of the events unfolding from the Predator’s perspective, technology helping it to seek out living creatures by body heat. This is the closest the film comes to exploring the creature’s nature, thereby wasting the one significant element of potential intrigue that the movie could have mustered. As analogy, it’s as if Titanic never sank the boat. I’ve heard some suggest that the refusal to explore these fascinating aspects of the Predator is not a mark of negligence, but instead purposeful murkiness to keep the being – and its reason for being on Earth – a topic open for interpretation. Even if that is the case, I still stand by the belief that attempting to address the philosophical issues raised by the Predator’s sentience would make for a far more compelling picture than just filming weightlifters spraying rounds into the trees hysterically. Because Predator is essentially a new take on the “most dangerous game” plot, the door is wide open for thoughts about the hunter having become the hunted, how humans have evolved into their position at the top of Earth’s animal heirarchy, and what they must do to retain their position.

Yet the movie would rather remain firmly rooted in simple action setpieces. The final battle is entrancing because Schwarzenegger gives up windmilling his arms, so to speak, and puts more thought into how to face his enemy. Also because the Predator shows his hand, so to speak, and lets its fallibility be exposed. There’s forethought here. There’s intent, and it goes beyond blasting shells. Am I simply approaching the movie from the wrong direction, trying to make it what I want it to be instead of what it actually is? Perhaps so, but if I took Predator only for what it is, it would be hard to take indeed.