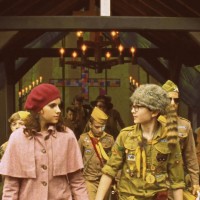 It would be easy to become frustrated with director Wes Anderson’s seeming refusal to let go of the flourishes which have made his work so readily recognizable. You don’t even have to see his latest, Moonrise Kingdom, to know that it will contain “yellow block-letter title cards, the narrated introduction to characters detailing their quirks…the indie-pop soundtrack, the strange way that these upper-class characters talk, issuing off-handed yet profound statements during fits of melancholy”, and of course a scene where the characters walk in slow-motion. It’s true that all of these signature elements can be found in Moonrise Kingdom, and yet somehow the finished product remains its own entity. The characters engage us in a far different way than those of Anderson’s previous work, the focus this time on two pre-teens whose blossoming romance is much more than a passing fling.

With this film and The Fantastic Mr. Fox, the director has taken his quirky view of the world to absurd extremes, the soft red, green and beige hues bright and cheery to the point of being almost cartoonish. Each could ostensibly pass for a children’s movie, the one being a claymation romp and the other being about two children, yet the serious themes explored within are unmistakably adult. There is, of course, the light comedic surface which follows retired Khaki Scout Sam and his girl Suzy as they leave their adult guardians in search of a place to call their own, and much of this humor is wonderfully original and inspired.  Take, for instance, a moment where a bored Sam leaves a church production of “Noah’s Flood”, exiting the building to walk past a huge array of children in various animal costumes. The sheer magnitude of the production is funny, but not in an overbearing way. The humor is so casual, so self-assured. As another example, Sam warns Suzy while fishing that she should avoid turtles because “they’ll bite if you put your finger in their mouth”. It’s a silly line, but it’s spoken in such a matter-of-fact manner that it seems a natural warning to give.

The movie is a comedy, and so a lot of the success of the film hinges on its ability to generate laughs. It does this with ease, but in addition it treats its characters with respect. Yes, Sam and Suzy are children and as such do some childish things, but this does not diminish their real emotions. Suzy carries a pair of binoculars around with her at all times because they make her feel as though she has a special power (to see things closer which are far away); it’s something that makes her feel special, and so when the two are attempting to avoid capture late in the film it’s no question for Sam that they should turn back to retrieve the binoculars despite the danger in doing so – these are important to his girl. Captain Sharp (Bruce Willis), the police chief of the island of New Penzance, can easily sympathize with Sam’s feeling of longing for Suzy. Despite the age difference between the two characters, they share a sad romantic streak that isn’t more or less real by virtue of age or possibility, and they can commiserate with one another. It’s so wonderful to see an adult and a child relating on the same level, or, hell, to see any two characters relating on the same level: as human beings.

Then there is the incredible staging, each scene constructed in an elegant, beautiful manner. There’s a great shot at about the midpoint of the film which shows an American flag on the far left side of the screen, a police car and a small house in the center, and a large red-and-white lighthouse on the far right. It’s a gorgeous shot, the kind that would make a great picture independent of the context. Another stunning moment has the Narrator (Bob Balaban) standing in the early-morning darkness, describing the dropping temperature which suggests the beginning of a terrible storm (to the film’s credit, nobody ever says the phrase “there’s a storm coming”). He turns off the light on the camera and almost immediately the children’s small rowboats enter the frame from the left, silhouetted in the blue-black light of the morning. It’s marvelous. I could go on. The introduction to Suzy’s house, which has the camera traveling through each room like it were partitions in a dollhouse (very similar to a scene from both The Fantastic Mr. Fox and The Life Aquatic), is quite enjoyable; the inlet where Sam and Suzy set up their campsite is idyllic.

But more than anything, after seeing the film twice, I keep coming back to the aching honesty of the characters’ interaction and their dialogue. A moment that comes to mind in particular has the two children discussing their dreams for the future. Suzy notes that she often wishes that she were an orphan, like Sam is, because she feels from reading adventure books that orphans live special lives. With utter seriousness, Sam looks his girl in the eye and say, “I love you, but you don’t know what you’re talking about.” Suzy is taken aback for a moment, then quietly responds: “I love you too.” The moment is played perfectly. As for an example of the character interaction, the two lovers dance on the beach to the music emanating from a record player, moving together and begin cautiously exploring each other’s bodies. There’s an element of sexuality to the moment, but it’s far from pornographic and the scene quickly cuts to the two waking up the next morning together, holding each other tightly. God, it’s so warm and sweet and sincere that it’s hard not to smile.

And I guess that’s why the Wes Anderson formula still works, even though it’s remained largely the same through seven different feature-length films: because it’s clear that the writer-director is doing the things he likes, creating the worlds he wants to exist, inventing characters we can easily relate with and situations we can happily laugh at. The stakes aren’t necessarily high, but each sentence spoken by the characters is delivered with confidence and meaning. Moonrise Kingdom is funny, and touching, and majestic, and watching it makes me happy. I’ve seen the movie twice now, and I’d gladly get lost in the world of the movie again. I love that there are movies that can make me feel that way.