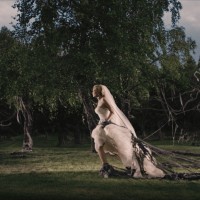 There are basically two parts to Lars Von Trier’s understated Melancholia. The first takes place at a wedding reception (think Rachel Getting Married) wherein the bride Justine, played by Kirsten Dunst, refuses to play along with the festivity. She chooses to wallow in depression instead, at least when not acting in childish ways. You’ll forgive me, I hope, as I proceed to ignore this portion of the film almost entirely. Call me dense, but I failed to see its significance or find anything of interest within this portion of the film. I may be getting ahead of myself here, but the camera moves shakily around this group of dinner guests, briefly highlighting some of them. They have their banter, Justine’s parents arguing with one another or the wedding planner being snippy, but it’s only vaguely amusing and does not speak toward any deeper meanings. Stellan Skarsgård and his son Alexander both have cameos during this part of the movie, but their talents are almost completely wasted. Both characters are written out of the script rather unceremoniously.

What saves the film from being a tedious mess is the stellar second half, the part that actually has to do with the titular planet Melancholia. Actually, let me back up a bit: the film truly begins with a gorgeous montage of slow-motion images that could very well be a slideshow (many, though not all, are seen in the film’s trailer). In a dream-like state, we see Justine in a wedding dress running from vines which are consuming her or floating on her back down a stream. We see her sister Claire (Charlotte Gainsbourg) trudging across a golf course, her legs sinking into the turf. And we see Melancholia, a huge behemoth that some speculate may end up colliding with Earth. It’s in the second half of the film that the planet becomes a major factor in the characters’ lives, and what’s particularly stunning about this segment is the mounting dread that comes from just seeing the planet in the sky. It’s a horror film whose monster is always on the periphery, in the back of everybody’s minds. That it gets so much mileage out of such a simple device is a testament to Von Trier’s inventiveness. There are multiple scenes where a character looks cautiously through a small, bent piece of metal – yet the tension in these otherwise simple moments is incredibly high.

The second half of the film is also where Dunst and Gainsbourg get the chance to excel. Justine suffers from crippling depression (the entire movie is sort of about depression, more on that in a moment) and there are some wonderful instances early on where her family quietly looks away as she breaks down in tears at the dinner table, claiming that her favorite meal tastes like ashes. Or how about a scene where her sister Claire tries in vain to move the lethargic Justine into a hot bath, a task which Justine cannot bring herself to accomplish. On a side note: the nudity in this moment seems appropriate and somewhat heartbreaking, standing in stark contrast to a later scene in which Justine lies naked in the moonlight – a shot that feels entirely gratuitous. Claire’s moment comes when she accepts the inevitability of the planetary collision, then runs around in a panic carrying her son; uncertain where to go, but feeling an overwhelming need to seek shelter wherever that may be found.

Even more compelling than the two women, however, is Claire’s husband John (Kiefer Sutherland). He loses his temper at the party in the first half of the film, then beams in excitement as he provides details regarding how close Earth and Melancholia will come when the two are at their closest in orbit. He excitedly wakes his family up when the night comes to view the planet, rubbing his wife’s shoulders and calmly assuring her that everything will be alright. His rigorous scientific outlook, his cool positivity here cast his later actions in a new light that adds a depth to the character which is not entirely complimentary. Yet the clashing ideals in his actions speak volumes, which is precisely what makes him such an intriguing character.

Then there is the thought that perhaps Melancholia is not real. Is it all in your head? What I meant to imply is that the planet is mostly metaphor, our impending doom not so much the aftermath of being swallowed by fire but instead of being consumed by grim darkness. But perhaps this is where the two halves meet: wondering whether Justine’s melancholy is real, much like the planet. Some, such as John who loses his temper, tend to think of her as little more than petulant. Her melancholy drives her to make peculiar choices; it kills her relationships and sends people away, until she’s left alone sitting on a stack of chairs. So the first half destroys Justine’s small world, the world where she is married and happy and successful. Perhaps even the wedding itself isn’t real. How deep does this go? That might explain why her husband rarely speaks, or how they ever managed to get together in the first place. Meanwhile, the second half tells about the destruction of the world at large, unless it’s actually telling the same story over again.

But even on a strictly literal level, if you opt to view the film through that lens even after seeing the surreal opening montage, it’s a visceral treat. The events grow and grow until it reaches an unforgettable climax that will, to quote my favorite film critic, “leave viewers gripping the armrests”. The threat of the planet looming overhead is great, and the tender way in which Justine takes on the responsibility of saving the world (metaphorically!!!) is quite moving. Melancholia works as science-fiction, as horror, as thrilling drama. I’m still not convinced of the worthiness of the first section of the movie, but the latter half stands so strong and true that it almost makes the former inconsequential.

As I told my wife upon leaving the theater, I usually find that I admire Von Trier’s output more than I like it. That’s no slight; with this picture, there’s a lot to admire.

One Response to “Melancholia”