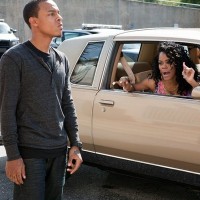 When I initially introduced myself to the wonderful world of Tyler Perry’s Madea not so long ago, I was intrigued and scandalized by the film’s herky-jerky structure, swinging wildly back and forth between hard-nosed drama and goofy comedy with little concern for the effect this would have on the film’s coherence. Now on my third in the series (I saw Madea’s Family Reunion but didn’t tell you), I’ve come to expect this sort whiplash editing as a hallmark of Perry’s signature style. It’s true that the most recent in the Madea saga sticks to the tried and true formula of allowing deep, dark themes to be sorted out with a few choice words of wisdom from our title character – or, when words fail, ramming her Cadillac through the front window. What is striking about Madea’s Big Happy Family, however, is that the focus remains on Madea’s family, a bunch that is often nearly as wacky as she is. There’s still serious topics under discussion, but the sudden shifts aren’t as apparent.

I miss them. Perhaps it’s just that I’ve come to expect the unexpected, but without the jarring tonal shifts, this latest in the series feels surprisingly flat. Madea’s niece, Shirley (Loretta Devine), learns at the start of the film that the cancer she’s been battling in secret for 7 years has re-emerged and the prognosis is not good. She wants to get her children together for a nice dinner together so that they can reminisce and relax before she drops the bomb on them. Much to her dismay, all three of her children have problems of their own and cannot be bothered with a silly dinner. Kimberly has anger issues that have caused her relationship with her husband to untangle; Tammy never bothered to show her children any discipline and now they are unruly brats; Byron is trying to make good by working to support his young child, but his girlfriend is nagging him to get back into drug-dealing and his baby mama has made it her goal in life to be as obnoxious as possible to him. How can these various problems be solved?

Call in Madea, of course. I don’t understand why, at this point, calling the brash older woman is not every character’s first recourse when a problem arises – she invariable swoops in and saves the day with ease. Maybe it’s her tendency to whip out guns or hammers at a second’s notice that encourages the family to only use this secret weapon when things have gotten their worst. Not to say that Madea is sitting this one out – she get a lot of screen-time. From a hilarious introduction to the character where she turns a fast-food joint into a literal drive-thru, to the joking conversations that she shares with ex-lover and neighbor Mr. Brown about the possibility that he could die of prostate cancer, the character’s exuberant personality is on full display.

Also, standing in for Madea when she is not around is the rotund Aunt Bam (Cassi Davis). Bam smokes weed constantly, and isn’t afraid to tell her grandson’s girlfriend exactly what she thinks of her in a cutting parody of “Row, Row, Row Your Boat” with the word boat replaced in the lyrics by ho. Bam is considerably less charming that her sister-in-law, which explains her inability to bring order to the chaos going on around her, though she brings comedy to the proceedings as well. To be honest, the comedic aspect of the film is probably the strongest, insomuch as there are far fewer scenes of pure drama than there were in the previous films. Even when Tammy’s husband Harold takes her aside so that they can discuss the status of their relationship in private, it’s filtered through Madea so that the otherwise serious moment retains some levity. Kimberly and her husband Calvin do have a somber conversation, but it’s one that tiptoes around some disturbing concepts which help explain why Kimberly acts the way she does. After seeing a man break down sobbing in Madea Goes to Jail, the restrained way that this revelation is discussed feels something of a letdown.

Again, let me clarify that I don’t mean that the film lacks the gut-punching twists of the other entries in the series, only that they are often much more muted. Shirley is informed that her cancer has returned mere moments after Bam sexually harasses the doctor and runs off to the bathroom to get high. The prognosis could have been delivered in a manner that veered suddenly from Bam’s hijinks, but instead the film ebbs smoothly away and into Shirley’s story. She takes the news easily, and in fact she and Bam are laughing about it not long afterward. There is a shocking scene involving Byron that builds in a great way to reveal hidden secrets, but the follow-up is mysteriously tame for the weight of the information.

And it goes around and around. Shirley invites her children over for dinner, they arrive and get into an argument, the next day the whole thing starts over again. Byron’s baby mama whines at him to get her money, his current girlfriend pleads with him to deal some drugs already so they can move into a nice apartment, and then it begins all over again. It circles around in this fashion until the final leg, wherein the group all begin to air their dirty laundry and, with the help of the title character, begin to work past their demons. A lot of the answers seem to boil down to “women should be subservient to men”, a theme that also came through at the end of Madea Goes to Jail and left me feeling a bit uneasy, but it’s all worked out nonetheless.

After seeing three entries in the Madea series, I feel almost the same as I did after seeing the first. The movies are bad, in that they work with broad themes and trite resolutions, that they use the title character as a cure-all for everybody else’s issues and shuffle their feet anxiously trying to kill time until Madea can show up and right everybody’s wrongs. How much time could have been saved if Shirley had just told her children the reason she needed them at her house, rather than providing murky excuses about just wanting to see her children… three nights in a row? And yet, I am still entranced by the series in a way I can’t explain. It mingles the ridiculous with the serious in a singular way; I don’t know if the concoction has a good flavor, but yet, I can’t stop myself from coming back for one more taste.