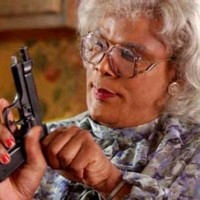 I’m ashamed to say it, but 2009’s Madea Goes to Jail is the first Tyler Perry movie I’ve ever seen. But I’m only ashamed in the same way that I would be if I had missed out on any pop cultural oddity. I know exactly why I’ve kept my distance: the image of Perry dressed as the loud, overweight, mannish title character turned me away from the film series, which I envisioned being as broadly comic and scatologically obsessed as anything that Adam Sandler or Eddie Murphy are liable to release. To my surprise, the film’s focus is far less on Madea – probably the weakest element of the movie – and much more on the twisted relationship between a lawyer named Josh (Derek Luke) and a prostitute named Candy (Keshia Knight Pulliam). In this way, Madea Goes to Jail overturned my expectations; in the jarring tonal shifts, it just confused the hell out of me.

I’m not entirely certain what purpose Madea serves to the film. Though it’s ostensibly about the character being sent to jail, she clowns around for a great deal of time before the sentencing and then once convicted her time behind bars is mostly shown in montage. Jumping into the middle of the series, it’s also hard to read the character. There are times when she seems to have an almost loving relationship with some of her fellow inmates, but at other times Madea is abrasively rude – it’s hard to tell where the joke ends and her just being awful begins. While a judge is listing her countless crimes, the sound fades into the background and we hear Madea berating her nephew Brian (Tyler Perry, natch) under her breath for being an incompetent lawyer. It’s difficult to decide whether this maliciousness is darkly comic or just dark. In another surprising moment, Madea comes home to find a house party in progress – her face turns red with anger and the camera cuts outside of the house. We hear machine gun fire and the flash of each exploding shell through the darkened windows and the guests tumble out of the house immediately. Wait, is Madea supposed to be Elmer Fudd? Did she just murder a bunch of people inside her own house, or is this supposed to be a Looney Tunes-type of aside?

Making it even more difficult to find sense in the chaos, Candy lives in the ghetto. She hangs out on street corners, haggles prices with guys in pick-up trucks, takes drugs and risks being assaulted every now and again. The problems in her life are serious, and they stand in stark contrast to Madea’s hijinks. Though the two wind up in the same prison, giving Madea the chance to impart some wisdom about taking responsibility for your own actions, it’s almost impossible to believe that the two come from the same movie. It’s true that there’s a lot of cliches in the way that Josh and Candy’s story plays out, but there are also some startling moments of honesty. Take, for example, an uncomfortable scene where the camera looks down on a bed, zooming slowly outward, to show Candy helpless and pinned under a “client” who became violent. Or how about a moment later in the movie wherein Josh confesses a long-ago crime to a hard-as-nails minister (Viola Davis), he sobbing openly while trying to get the words out. I don’t know if I’ve ever seen a grown man break down into hysterical tears like that in a film before. There’s something kind of beautiful about that the fact that the film is willing to go there, even if it reacts with lame platitudes about “learning to forgive yourself”.

In truth, there’s a lot about this part of the film that comes across as alternately heavy-handed or lazy. Josh’s sudden interest in helping Candy puts his relationship with his fiancee Linda in jeopardy, but no matter how often Linda points out how much it looks like he’s cheating on her, Josh doesn’t explain himself or attempt to deflect her rage. I suppose one could make the argument that he’s racked with guilt and is afraid to acknowledge it, but more likely it makes for a greater dramatic release when he breaks down in front of the minister. Maybe I would believe the “he feels too guilty” reading if he at least made an honest attempt to reassure and console his worried girlfriend rather than playing it macho and ignoring her hurt feelings. There’s also a suggestion that the only way that Candy can be saved from her awful life is through the help of a man, Madea’s words about taking responsibility for your own actions be damned. Perhaps most groan-worthy, though, is the sudden invention of a villain to allow the characters to work against, thereby growing closer together and once again allowing for a stirring monologue – this time in service of self-righteous moral certitude rather than tear-strewn revelation.

It would be easy to find the “serious” parts of the movie laughable if the center didn’t hold so well in spite of the stock plot devices. You kind of have to dig past the stereotypes (“You don’t know me!”) to see the humanity underneath, but what little nugget of sincerity is there – e.g. the minister warning Josh that helping a junkie isn’t a one-and-done kind of deal and his taking time to seriously consider whether he is up to the challenge – is so refreshing that it almost overshadows the missteps. “Missteps” is the wrong term though – these are steps that are so well-worn that they’re more like potholes. And then we’re back to Madea, having a hilarious back-and-forth with television’s own Dr. Phil McGraw because the only thing better than a man dressed up as a woman is celebrity cameos! And it’s not like the movie eases back into Madea’s story either: it smashes the two plots together haphazardly with no sense of cohesion or coherence.

A lot of ideas are thrown together here: some of them work, while others flail about wildly. I’ll admit that Madea Goes to Jail is not what I was expecting when I started the film. But then, how could I have anticipated such a bizarre mess?