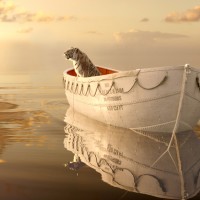 Director Ang Lee’s film adaptation of the novel Life of Pi is, above all else, absolutely gorgeous. I’m not sure if that’s all I want to say about it, but that’s primarily what I want to say. A lot of the stunning beauty of the film shows up in the way the sunlight reflects on the placid ocean as our hero remains adrift at sea – a shimmering tapestry of gold and blue – but it’s not just that. When the film treats its characters as real, divorced from the uncomfortable framing device that desperately wants the entire story to be some parable about the virtue of spiritualism… when the movie just accepts the facts of Pi’s story for what it is, it reaches close to transcendence. Yet ultimately the film cannot maintain that precarious balance and falls into cloying sap when a harder edge was needed.

The film chronicles the life of Piscine Patel (Suraj Sharma) beginning with his childhood days in India where his iron-willed father ran a zoological garden. The story is told by Pi as an adult, and as the film alternates between current day and memory, the images spill over into one another marvelously. In one of the most awe-inspiring moments of the entire film, the camera points upward at the sunlight as Pi recounts tales about his uncle, a swimming enthusiast. Across the screen, Pi’s uncle glides and we come to realize that we’re looking at the pristine waters of a Parisian pool. The understated elegance of the imagery is breathtaking, and as we return to present day his uncle continues paddling across our field of vision. We are told of Pi’s father’s attempt to move his family and menagerie to Canada, a trip which took a tragic turn when a squall sunk the ship and left poor Pi alone in a lifeboat. That “understated elegance” I made reference to above serves the film well during this, the bulk of the film, allowing for a persistent warmth despite the dire circumstances and relative lack of action.

Truth be told, Pi is far from alone in this new predicament: it doesn’t take long for him to learn that he’s accompanied on this strange journey by the hulking tiger from his father’s zoo, which goes by the name Richard Parker. The tiger is almost entirely computer-generated, as is the majority of the landscape (or sea-scape, as it were), but what’s endlessly fascinating is how remarkably realistic the animal behaves. It’s essentially little more than a cartoon character, and yet the ways in which the great cat paces around inside the tiny vessel, mewling at the sea, swiping at fish, and so forth… it’s presented with a remarkable fidelity to the way such a creature might react if actually placed in such a situation. The struggle of Pi, who manages to keep his distance from the snarling beast with the assistance of a mass of driftwood he fashions into a crude satellite raft, provides a renewed sense of tension each time our hero has to pull himself closer to the boat in order to gather supplies. And of course, through necessity Pi comes to bond with Richard Parker. Don’t misunderstand me – the film wisely refrains from softening the tiger, by making the monstrous carnivore into a tabby that just needed to learn to love, for instance. Instead, what I mean by bond is that Pi learns how to work with the tiger rather than against it; with great patience he learns how best to approach the beast so that it respects him.

And through it all, Lee keeps the viewer rapt with dynamic visual treats, from a shimmering school of jellyfish to a luminescent whale splashing nearby in the nighttime. And in one of my favorite scenes, Pi stares deeply into the abyss and has a hallucinatory vision of swirling memories which breaks apart and conglomerates again in a fantastical, kaleidoscopic way. Roger Ebert, staunch opponent of the push for 3-D films since the turn of the century, couldn’t help but marvel at such sights, noting that he’s “never seen the medium better employed”. I saw the film in a traditional 2-D format and it was truly stunning already; I can only imagine how much life the increased depth of field would add to such awesome visions.

I do have strong reservations about the present-day framing device, which has an adult Pi (played by Irrfan Khan) recounting his story to a writer who has come to be regaled with this fantastic tale complete with a moral at the end. The set-up is disappointingly hackneyed, and Life of Pi does little to breathe any energy into it. The occasional breaks in the story that the present-day creates are nothing but filler. The one purpose it serves is to build toward a “pay-off” in the final act, but this could have been accomplished with as much or even greater poignancy by putting the focus where it apparently was in the source material: a scene set in a hospital following Pi’s return to civilization. Diluting the power of the message by delivering it second-hand has the unfortunate effect of undermining it. Perhaps the spiritual aspects of Pi’s story would have felt weightier with such a change; as it stands, the suggestions of a divine presence remain distinctly flavorless and potentially counter-productive.

Nevertheless, the film presents an off-shoot of that line of though which does work to a greater degree. The theory presented is this: that Richard Parker serves less as a genuine figure sharing space in the boat with our young hero, but more as a metaphor for a part of Pi’s psyche which is unleashed by his situation. In this view, there’s a reason that the boy and beast occupy different sides of the vessel (conveniently delineated by a tarp which divides the boat in two) – and that reason is less because of the tiger’s literal danger than because of the clash between Pi’s soft humanity and primal urges of rage and survival instinct. In this interpretation, the tiger keeps Pi alive not by challenging the boy to find food while fending off the predator but instead by keeping his mind active – the tiger is, in a sense, a philosophical discussion that Pi has with himself about his own nature. And when Pi ultimately learns how to manage the cat to avoid being mangled, it’s representative of his growing capacity to control the circumstances in which he finds himself. An odd sub-plot involving an island of meerkats is harder to make sense of within the bounds of this interpretation, but that stumbling block aside the multiple levels on which Life of Pi works – simultaneously literal and figurative – add a level of intrigue to what is already a beautiful piece of cinema.

The ham-fisted handling of the religious/spiritual thread of the story is the film’s only real weakness, but it serves as the foundation for the finale so it’s difficult to ignore. I say this coming not from the perspective of an antitheist, but instead from that of a film critic. The spiritualist message could have worked to a far greater degree if it had been presented in a different format – particularly one that dispenses with the book-end present-day scenes. Without those elements, Life of Pi is a subtle, captivating, and delectable work. It’s not one that grabs viewers immediately with a lot of flash (save for a few harrowing sequences), but is more of a comfortable slow-burn.