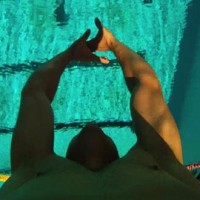 Life in a Day is a crowd-sourced documentary which chronicles various random events happening in the lives of people across 192 different countries, all from July 24, 2010. Over the course of the film, the audience is treated to images of people from all walks of life doing the things that people do. They wake up in the morning, they eat food, they practice basic hygiene, they interact with their families, they slaughter cows and goats. Some of the video looks to be made with expensive cameras so that the image appears professionally rendered; other times, it has the grainy look of your basic clip from “America’s Funniest Home Videos”. It all comes together to culminate in one overriding theme: people exist.

I think that’s the idea that producers Ridley and Tony Scott were trying to convey here, that human beings are in fact tangible objects. Much like 2010’s super-cute documentary Babies, the film seems to have little to say. Where that film’s thesis boiled down to the universal truth babies are cute!!!,  here the concept is broadened. “In some ways,” the film says, “people are similar the world over.” We all wake up from sleep, we all have various fears, we all have pockets whether there is or is not something in them. But, ah-ah, now let me turn the table on you: there are other ways in which people are different! Some of us live in poverty while others drive expensive cars. Some of us are happily married while others seek love in vain. Some of us live lives of perpetual excitement – riding a bicycle across the globe, for instance – while others spend the day at work and find by the time the sun goes down that little of note has happened to them.

Isn’t this all too profound to take? In an effort to increase the unscripted artistry on display, sometimes the scene will remain with one of the people self-documenting for an extended period of time. An ill mother pleads with her angry young son to maintain a positive demeanor while they videotape. Her husband, behind the camera, tells the boy that he has to be happy in order to appear on camera. When asked why, the man responds: “Because this is a happy movie. It has a happy ending.” Because, like, life has a happy ending. I’m sorry, did I just blow your mind? Of course there are times when bad things happen: a crowded concert becomes a death trap as festival-goers are trampled in the chaos, for instance. But these occurrences are just a blip on the pulse of the planet, a mere thread in the tapestry of existence.

“Hemingway, Eichmann, Stranger in a Strange Land. Dylan, Berlin, Bay of Pigs invasion.” Many have criticized Billy Joel’s love letter to his own generation “We Didn’t Start the Fire” for amounting to nothing more than a random (though chronological) grouping of allusions to events from the past, tied together with a chorus insisting that Joel and his ilk did not start “the fire”, where said fire represents societal conflict or else, I guess, just history itself. But with the exception of this vaguely clarifying chorus, the song amounts to just a collection of hardly related references. I tend to think of Life in a Day as the cinematic version of this song. “The fire”, i.e. the unifying theme which makes these various clips into something more than its parts, is just as inscrutable. The song is very catchy; the movie contains a lot of gorgeous imagery – a Google image search for possible thumbnails to include with this post gave a great number of eye-catching possibilities. Sometimes Joel says a line which is hard not to sing along to (“Chubby Checker, Psycho, Belgians in the Congo”), and the movie sometimes lets a scene play out to allow the participants to add depth or humor. Sometimes both at once, as when a Korean man watches a fly in his soup, describing the many sizes of flies he’s seen traveling to different countries.

But this supposed wisdom is faux and far between. A minor theme begins to develop as we hear the loves and fears of deeply religious people, describing their fear that those they love will be sent to Hell or that that their faith in God is misplaced and that they will spend eternity buried underground (they expect to remain conscious in death, I guess?). With a lightning storm illuminating the night sky, another girl discusses her desire to remind others that she exists even if a day in her life isn’t as exciting as it was for someone who is recorded skydiving and soaring through the clouds. So maybe my sarcastic proclamation at the start of this review isn’t that far off base. As Noel Murray’s review of the film for the AVClub notes, “if nothing else, Life In A Day serves as a fine time capsule, recording some of what life was like on Earth in 2010.” As that alone, a moving photograph only, I don’t feel upset calling the film a success.

But unless the film is buried for a century or shot into space, the success is short-lived. What use is a time capsule of 2010 for somebody viewing it in the year 2012? Without some thought to present about the world and our place in it, the film becomes just a celebration of our own vanity. This is what a day in my life is like, and I believe it should be included in a feature film. More interesting than the simple query “what is a day in the life like for you” might be a question of why a given person’s life is the way it is. So you’re bicycling around the world, huh? Now tell us what drove that decision, and how you can continue pressing onward even after being hit by vehicles half a dozen times.

My wife commented, as we watched the film, that any number of the participants could have an entire documentary based on their struggles. They could, and those movies would provide a more rounded picture of who these people are as human beings. As it stands, Life in a Day only tells us that they are human beings and lets the point rest there.