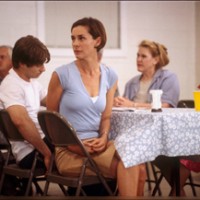 Like a cross between the early works of David Gordon Green and Wes Anderson, Junebug comes out of the gate with fists flying. With a combination of heartbreaking melancholy and knowing comedic sensibility driven largely by southern culture, it’s a simultaneously hilarious and profound film. The tone is not constrained by genre, allowing one scene to serve as powerful dramatic metaphor while the actors (primarily Amy Adams) bring a goofy commitment to their characters. If the movie dips into poor comedic timing or overwrought metaphors sometimes, it is largely a result of putting so much into the finished work.

The story concerns a large cast of characters. You might say that Madelaine (Embeth Davidtz) is the main character because she is the one who is placed into an exotic locale which she must adjust to alone. An art dealer from Chicago, she travels with her new husband to North Carolina on twin missions: to woo an autistic artist whose lawyer sister is committed to signing with a New York City auction house, and to meet her husband’s family for the first time. The family in question is a cinematic band of misfits, at first glance. There’s the stoic father Eugene, the critical mother Peg, a good-for-nothing brother named Johnny who makes a habit of ignoring his pregnant, peppy wife Ashley. It’s a lot to take in when Madelaine arrives, learning how to relate to these people – the type of folks who halt their conversation mid-sentence when their guest takes a cell phone out of her purse. They stare at her in fascination.

“It’s weird, you think that they’d be proud of him. But when you leave the hood, they think that you look down on them,” Childish Gambino raps on the opening track of his album Camp. That sentiment stuck in my mind throughout the majority of the film, as Madelaine’s new family looks upon both herself and her husband suspiciously. They can see that her hands are fine and soft, not used to doing any manual labor. They can see their polished car, their nice clothing, their worldliness, and they resent it. All except Ashley (Adams), who conceals her sadness with bright enthusiasm. A high-school drop-out, she delights when told stories about Madelaine’s childhood in Africa and her eyes go wide with excitement at the proposition of visiting a mall. But the rest of the clan are harder to impress.

And that’s the movie. Madelaine and her husband spend time with the family, getting to know them and experiencing their culture. It’s a character study and little more. Would I be spoiling the movie to say that it begins with the couple driving to North Carolina and ends with them leaving? This is not about a torrid love affair or a bloody feud, it’s a much smaller and far more contained picture of a group of people related by marriage, learning to accept each others’ differences. Sure, there’s the subplot regarding whether or not our girl Maddy can say the right words to compel the artist’s sister to sign with her auction house, but this is little more than an aside in the grand scheme of things. Truth be told, it’s probably the weakest part of the film because it’s the most conventional. Here is the goal, here is the obstacle preventing the hero from reaching that goal, how oh how will this error be reconciled?

The relaxed meandering of the scenes with the family are much more intriguing. There’s a wonderful segment where Ashley and Madelaine sit on the couch together, discussing their similarities and painting their fingernails. The camera focuses in on the careful, deliberate way that Ashley applies the coloring to her new mentor’s long nails. There’s an adorable connection between the two, Madelaine doing the things that this overbearing family member wants to as a show of solidarity with her new family. Afterward, Madelaine waves her arms in the air (to help the paint dry) in a hilarious manner, even more so as new characters enter the room with no idea why she’s moving so strangely. Even more affecting, perhaps, is a gathering where Madelaine is introduced to many of her husband’s old friends and more distant family members, a young pastor asking the family to bow their heads in prayer. Surprised by this, our protagonist glances around quizzically at the rest of the group while their eyes are shut. She is shocked to hear her husband stand up in the midst of the gathering and sing a beautiful hymn.

At the risk of actually spoiling the film (maybe you should stop now if you plan to see it), the staging of the action and the sometimes unreadability of the characters makes it appear that the plot could move in many different ways. Are Madelaine and Johnny going to fall for each other somehow? Is there a violent outburst preparing to happen? Or perhaps a revelation about the relationship between Ashley and Madelaine’s husband, George. Late in the film, Maddy has to make the choice between rushing in an attempt to salvage her relationship with the artist’s sister or driving to the hospital to join her sister-in-law for the birth of her child. Her choice is to focus on her career; afterward, her husband is upset and tells her to take a cab back to the house because he will not come to pick her up. It’s extremely easy to think that, well, they’ve only been married for six months and they didn’t know each other well to begin with… she is not a part of his world, and this is the breaking point of their relationship… and yet by the end of the film, they’re driving home together laughing at the odd time they’ve spent with his family.

Because it is a movie, we expect some major event to transpire. We expect a break-up, a death, a fierce shouting match, a heartache tonight. But for all its comedy and metaphor, Junebug is grounded in a much more realistic, human manner. Yes, the couple have had a disagreement but Madelaine is not related to her husband’s family, except by marriage. She makes great efforts to be part of their activities, she spends a great deal of time with Ashley, but in the end she has different priorities. It’s not unbelievable that her husband would be angry, but by the film’s end he has come to terms with their differing lives… and they’re happy with one another. Johnny and Ashley have a terrible relationship – he’s immature and selfish, she lets herself get walked on – but it’s clear that he wants to have a child and when his wife goes into labor, Johnny frantically runs around trying to help in whatever way he can. When a show about meerkats (Ashley’s favorite animal) comes on the television, he scrambles to get a cassette tape in the VCR on her behalf. He doesn’t show it well, but he loves her, in his way. Eugene and Peg rarely sleep together, he spending his nights in a basement workshop and returning to bed only when he thinks she is asleep – but by film’s end, he has made a small wooden carving for her, a small token of his affection.

It’s an entire family of people who don’t know how to properly display their emotions. I’m not saying that Johnny and Ashley belong together anymore than Madelaine and her husband do. But we can see why they are together, the spark that made them work in the first place. That it’s not as bright as it once was, or not as bright as they would like it to be, is where that tinge of sadness creeps back in. But the film handles the particulars in a beautiful and often delightful way. Junebug may move at a more leisurely pace than a lot of films, but that calm demeanor is the right choice for helping the viewer get absorbed in the characters’ world.