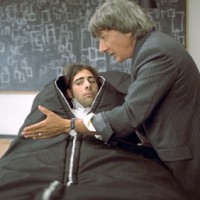 Albert Markovski (Jason Schwartzman) hires a husband-wife pair of existential detectives to help him find the deeper meaning of a coincidence that has been bothering him, at the start of I Heart Huckabees. Instead of focusing on the once coincidence, the pair decide that the larger goal is to break Albert out of the pattern of ennui that has been plaguing him for possibly his entire life, and elect to do this by opening his mind to the interconnectivity of the entirety of this cosmos. Bernard (Dustin Hoffman), the husband half of the team, does this by comparing the universe to a limitless blanket: though there are many spots within that blanket – you, me, the Eiffel tower, orgasms, hamburgers – it is all a part of the larger thing, the blanket, and so even things which are different are really the same. It’s a heady bit of philosophy for a quirky comedy to tackle; perhaps it is that the movie fails to sell the concepts as important or enlightened which limits its impact. I ended up feeling the same way as I did when I initially saw the film, in the theaters, back before I had even begun writing reviews – back before everybody and the kitchen sink had a Facebook: it’s a fun movie, but ultimately unmoving.

There are two scenes which I can point to that put Albert’s first-world problems into focus. The first comes when he and his existential other (Mark Wahlberg) – kind of like the buddy system – sit down for dinner with the family of an adopted Sudanese refugee. Albert and his other begin to detail the various things which depress them and cause them to question the meaning of life. Disturbed by the odd behavior of the two men, one of the other children asks her mother something to the effect of, “Do we all have to ask these questions?” Mother assures daughter that no, dear, we do not. Maybe it’s intended to be a commentary on the staid complacency of this family, but this reassurance was more meaningful to me than all of the theorizing about the space between where my nose ends and space begins. It started to put things into perspective, that though questions about our “purpose” may be interesting to consider, they bear so much less importance in the here and now than Albert and his other Tommy are prepared to admit. The second scene also concerns this Sudanese refugee: a third detective shows our protagonist that his parents have habitually ignored him, comparing Albert’s childhood plight to that of the African man. “You were orphaned by your parents’ neglect, he was orphaned by civil war,” she intoned with deadly seriousness. But as soon as the words are out of her mouth, the disparity in the two states become immediately clear.

Which, to be fair, may be the point to a certain extent. This third existential detective is a former student of Bernard and Vivian, but they formed separate schools of thought in their work. While the hired detectives work to show their clients the way that everything is connected, Caterine intends to show that nothing is connected. Her business card reads: “Cruelty, Manipulation, Meaninglessness”. Yet there are connections between people or events, as Albert slowly realizes; he begins to see similarities between himself and his arch-nemesis, the corporate lackey Brad Stand (Jude Law). What the movie doesn’t fully acknowledge, though, is that these similarities – this connection – exists only because Albert begins to perceive that it exists. It is we, as thinking machines, who create that sense of order and meaning. A great illustration of this concept comes in the final lines of the film (spoiler?). Albert tells Tommy that he plans on chaining himself to a bulldozer in the morning and asks if his other would like to join. Tommy asks if he needs to bring his own chains. Albert’s knowing response: “We always do.” It’s a metaphor for the items which tie us to the physical world, the human drama which keeps us from attaining perpetual enlightenment, but the only reason that the double meaning works at all is because the viewer perceives it to have multiple layers.

What I am getting at here is that there is another possibility beyond “everything is connected” or “nothing is connected” or “everything is both connected and not connected simultaneously”. That fourth viewpoint is that things are only as connected as we want them to be. This precludes thoughts along the lines of everything is meaningless – a way of thinking that Tommy gets caught up in and consequently sees his marriage fall apart. It’s a bigger picture: in the grand scheme of things, we – you, me, the Eiffel tower, orgasms, hamburgers – are here for but a short amount of time. That doesn’t mean that we are wasting our time and should off ourselves right here and now, but instead that the best should be made of what time we are afforded… with those things we imagine to be important kept at the center of our beings. All of which is to say that the film’s philosophical stance rubbed me the wrong way, and therefore lessened my enjoyment.

But how many times in your life can you say of a screwball comedy that you didn’t connect with it because of its philosophical leanings? In that respect, that the film got my brain turning and contemplating these ideas – what I agree or disagree with, why, and how it affected my appreciation of the overall presentation – the movie is a resounding success. And it is funny, yes. Other critics have compared the film to the work of Wes Anderson, Charlie Kaufman, or P.T. Anderson. All are astute comparisons, as I Heart Huckabees is as aggressively unconventional and ambitious as anything these other filmmakers have released. It’s a madcap ride and a joyous exploration of metaphysical curiosity.

But then, what happened to the cat?