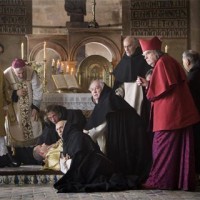 There is one scene in Goya’s Ghosts, from director Milos Forman (One Flew Over the Cuckoo’s Nest, The People vs. Larry Flynt), which I think perfectly represents the tone of the film. The scene in question comes shortly after famed Spanish painter Francisco de Goya (Stellan Skarsgard) unveils a large painting of the Queen that he has been commissioned to make. The artist has done nothing to beautify her royal highness, which causes the King and Queen to leave in a huff. Shortly afterward, Goya is called to the King’s chambers. Uh-oh! I know what you’re thinking, Goya has got some splainin’ to do or it’s going to be his head on a platter. Instead, the King asks the painter to sit down and proceeds to produce a violin. The King, standing, plays a short piece on the instrument and indicates that he himself wrote it. Goya can only get out a faint bit of appreciation before a man rushes into the room announcing that France’s Louis XVI has been put to the guillotine. “My cousin?” the King gasps, exiting the room. End scene.

Huh? That’s a question that will be asked again and again throughout the film’s runtime, as the primary character shifts repeatedly and the plot wanders into various bizarre B-stories and out again. At the start, Goya is already quite famous and the Catholic Church is up in arms at some of the disturbing images he produces. Brother Lorenzo (Javier Bardem) posits that Goya’s images show the reality of this world, and the movie wastes no time in trying to recreate that, to mixed results. I am reminded of Anonymous, Roland Emmerich’s paean to Shakespeare which attempted to emulate the Bard’s style; Forman attempts to recreate some of the ghastly images of Goya’s work and exhibit the depravity of man. Success is abundant in the early stages, as Ines (Natalie Portman), the daughter of a wealthy merchant, is summoned by the Office of the Inquisitor to answer to charges of being a Judaizer, i.e. one who practices rituals of the Jewish faith. She is summarily tortured until a confession is gathered, then thrown into a dungeon already filled with suffering souls. One incredible scene has Lorenzo walking through the dark corridors with a look of disgust on his face, emaciated beings shackled to walls or locked in cages all around him.

This is an intriguing and provocative segment of the film, and when Ines’ family takes it upon themselves to prove the effectiveness of the Inquisition’s methods of gathering confessions, it’s a richly cathartic experience. But it’s not long before the action jumps forward a decade and a half, checking in with Goya long enough for him to indicate that the French – led by Napoleon – have seized control of Spain and, oh, the painter has gone deaf. There’s an ingenious bit of sound design in that we can hear Goya’s boots striking the stone floor and his keys jangling on his belt, but little else. Yet this spark of light is quickly overshadowed by the high beams of a convoluted soap opera mess that involves Lorenzo returning as a highly placed official in the newly formed French government exerting its control over Spain, Portman playing dual roles as both Ines and her grown daughter birthed in the Inquisition prison, Goya’s obsessive and paternal care for both of Portman’s characters, and the various ins and outs of military conquest. It’s not that the plotting is hard to follow from here, but it’s hard to understand what the purpose is.

As near as I can tell, the film’s major theme is disruption. With the exception of Goya himself, who wanders freely throughout Madrid without feeling compelled to answer to anybody, each of the other characters find their position in life radically altered within the run-time. The Inquisitor General, at first the unquestioned head of this arm of the Catholic Church, later finds himself imprisoned when the political tides turn against his brand of religious extremism. Lorenzo’s place in his community swings back and forth like a pendulum, Ines leaves relative opulence for the degradation of her prison cell. Even the country’s leadership rises and falls, rises and falls. When Joseph Bonaparte visits a Spanish art gallery, he is repulsed by Hieronymous Bosch’s now legendary “Garden of Earthy Delights“. Seeing the bizarre and absurd images within, Bonaparte indicates that the piece would not find a happy home in France; much more pleasing to Napoleon would be a conservative portrait of a family gathered round their hearth. Once more, the prevalence of this scene appears to suggest that Forman and his crew view Goya’s Ghosts in this light: unattractive, unwieldy, yet brilliant and complex.

I could be wrong, I suppose, but I’m searching for something to grip onto and suggestions about the film’s intent, however innocuous, feel like a good place to start. Because although I get the significance of Lorenzo’s ultimate fate, I don’t understand it. That is to say: why should I care? Who is Ines, and why should I care about her other than mere pity at the poor hand she was dealt in life? Who is Francisco de Goya and what role does he serve in the film, aside from a figure to help tie the other ends together, however loosely? The movie is called Goya’s Ghosts, but the only time his work is looked at with any level of seriousness is in the closing credits; before that, his painting is almost incidental to the plot, mostly allowing him to get past armed guards by saying, “I’m the royal painter.”

There are some interesting ideas at play in the film, especially in those early scenes as mentioned, but too much of the rest feels utterly disjointed. It’s not that the characters do no have their individual journeys over the course of the film (except maybe for Goya himself), but that they don’t register as integral to the story because there is nothing to ground it. Any one of the characters might have suddenly begun playing a concerto on violin and it would have made just as much sense. The movie shows us some terrific images, but then doesn’t know what to do with them.