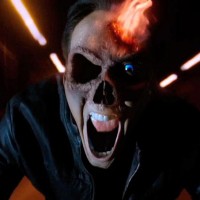 It’s no secret that I’m a huge fan of Nicolas Cage. I initially began watching the man’s films because I thought that he was terrible – his work in misfires such as The Wicker Man, Next, and Bangkok Dangerous seemed to prove as much. But as my adoration grew, I came to realize that there’s some kind of magic in Cage at his wackiest; the weirder and more pronounced the eccentricities of his characters become, the more exciting it is to see the man bringing them to life. A man I had at first considered an awful actor had quickly morphed into my favorite: he seems to approach most roles with a go-for-broke, manic energy that can’t be matched. So when news came that he was to star in a sequel to 2007’s Ghost Rider, only this time directed by Neveldine/Taylor (Crank),  I had high hopes. The pair of directors had created an adrenaline-fueled, electric atmosphere with their debut, and certainly they’d give Cage the opportunity to really go off the rails. But Neveldine/Taylor were last responsible for 2009’s quickly forgotten Gamer, and Cage has been squandering clear opportunities for his signature brand of madness for some time now: his turns in Trespass, The Sorceror’s Apprentice, and even Drive Angry were all frustratingly subdued. So when the early reviews for this Ghost Rider sequel began appearing, almost uniformly delivering news that the movie was another waste of potential, my heart sank.

I was not looking forward to viewing the film because I didn’t want to admit that Cage had lost the dynamism that made him a star in my eyes. But I am proud of the fact that I’ve seen every Nicolas Cage film, so my wife’s words of wisdom kept me committed: “You can’t not see it.” Now friends, let me tell you, I’m glad that I heeded that advice because I come to you with a shocking revelation: the critical consensus is dead wrong. Not only is Ghost Rider: Spirit of Vengeance a better film than the original, it’s a great example of Neveldine/Taylor working on all cylinders – and perhaps most importantly, a return to form for the legend. There are moments here where he really shines. This is a movie which features a scene of Nicolas Cage writhing on the ground in a cave yelling, “Merry Christmas, you assholes!” How can anybody claim the film is anything less than extraordinary?

What makes the movie work so well is in how cleanly it diverges from the original. The 2007 film realized that it was a comic book movie and treated itself as such, drawing its characters into cartoonish exaggerations. It was directed by Mark Steven Johnson, the same man behind Daredevil, and the similarity in style is quickly apparent. Broad characterization, richly colorful imagery, and a lack of understanding about how to create an engaging action sequence all left that movie feeling, ahem, uneven if we’re being generous. Spirit of Vengeance certainly makes room for occasional stabs at humor and there’s no question that the over-riding plot – concerning the Devil’s attempts to transfer his soul Vigo-like into the body of a child – feels to some degree perfunctory. The explanation of this plot is solid, but the mechanics of the endless chase are worn, just killing time until the ultimate showdown.

But even so, the time is killed with great artistry. First, there is the Ghost Rider himself: his outfit and motorcycle hideously charred, shaking violently, roaring with anger. Johnny Blaze (Cage) warns the mother of the boy he’s trying to protect that she must stay away when the Rider emerges – it views no difference between those who kill in cold blood or those whose biggest crime is having told a white lie; the Rider steals the souls of those with moral transgressions of any kind. The Ghost Rider is a monster, not a hero. Throughout the film, Blaze does his best to keep his alter-ego in check, his face sometimes transforming into the demon’s skull momentarily until he can muster the strength to regain control. Johnson’s film treated the character as an unquestioned hero. When he uses the “Penance Stare” to take down a baddie in the 2007 movie, it’s framed as virtuous and we see the man’s many past misdeeds playing out on-screen. In Spirit of Vengeance, the camera holds on the Rider’s flaming skull, teeth gnashing as he bellows a primal roar. The Ghost Rider isn’t here for photo ops and autographs, he’s a terrifying monster.

Additionally, the movie smartly refrains from forcing a love interest into the equation, allowing the focus of the film to remain largely on incredible action setpieces. A new power of the Rider that’s been added to his arsenal since 2007 is the ability to turn any vehicle into a flame-spewing monstrosity, an ability which shows up unexplained but to tremendous effect here. Lamely citing the character’s abilities before bringing them to the surface would be a mistake – shocking with uncanny ability and later explaining the source, as done, seems the better option. Ciarán Hinds takes over for Peter Fonda as the Devil, losing the previous actor’s smug self-satisfaction in favor of hissed threats. And replacing Wes Bentley’s unmenacing Blackheart here is Johnny Whitworth (Empire Records) as Blackout – a reverse King Midas who causes that which he touches to rapidly decay. When he places his hands on his screaming enemies, their bodies decompose while they’re still alive. It’s disturbing as hell.

And that is what Ghost Rider always needed to be. Neveldine/Taylor have crafted a version of the Rider’s story that involves far more sinister forces, which is much more unpredictable, and which is 100% more bad-ass. There’s no smiling “everybody lived happily ever after” epilogue to end Spirit of Vengeance because none is needed. Instead, it’s a battle sequence right up to the final credits – whether the battle in question is the Rider versus the Devil, Johnny Blaze versus the Rider’s animalistic strength, or the sheer concept of vengeance versus justice. My biggest complaint with Ghost Rider was that I found it uninteresting; Spirit of Vengeance, on the other hand, is a thrilling action flick that is quite often gorgeously shot and contains just enough of the Cage insanity that I love so much.

It’s that rare beast: a sequel which totally blows its predecessor out of the water.