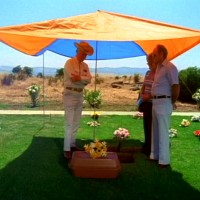 Roger Ebert has named Errol Morris’ debut documentary Gates of Heaven one of the top ten best films of all time. When I first saw the film, though I was already a huge fan of Morris, I found myself losing interest. It wasn’t my fault, honest, as my excuse-making original review clamors to put the scene in perspective:

To be fair, ladies and gentlemen of the jury, I had gone to sleep late the night before… and sitting on the couch, wrapped up in a blanket, well… it does something to a man, you see? It makes him.. how can I put this..? Well, it makes a man sleepy. And so, certainly you’ll understand if I found myself nodding off once or twice. TO ERR IS HUMAN!  HUMAN, I TELL YOU!

Despite owning the DVD, I had not returned to the film since that original viewing. Being given the choice of any movie to force on my wife as a kind of birthday present to me (as long as it wasn’t Enter the Void), now felt like a great time to give it another go-round. Man, am I glad that I did. It occurs to me now that although I’ve thought of Morris as a single entity based on the approach that he takes with his films – looking for comedy, philosophy, beautiful images and meditations on life, truth, and humanity – his changing style over the past several decades makes his work increasingly disparate. Recent films (Tabloid, Fog of War) rely on computer magic to make for a film that includes zippy editing and professionally made animated interludes; his work in the ’90s (Mr. Death, Fast Cheap & Out of Control) was much more PBS-ready, more personal but with found footage metaphors clearly adding the filmmaker’s voice to the shuffle; his earliest work, like Gates of Heaven, is much more simple. It relies on the subjects entirely to tell their story, and is among his most hilarious work.

I’ve mentioned it previously, but when I finished watching Steve James’ stunning documentary Hoop Dreams, I was convinced that it was fiction cleverly disguised as fact. James had captured a story so alive and challenging that the subjects felt like characters, as though their every word and action had to have been scripted to have turned out so dramatically satisfying. It’s easy to get a similar feeling from Gates of Heaven. Reminding me strongly of Wes Anderson (others cite Christopher Guest), Morris’ subjects all sit in incredible locales, the patterns of their clothes and the sparse furniture behind them too unreal to take seriously. Each set is so quirky it seems to have been put together by a set designer looking to make a name for themselves. I guess that was just what it was like in the 1970s. Beyond that, each successive subject talks with a level of unhinged honesty that is unheard of in the genre. And what is it that they all want to talk about?

While it is riotously funny, the film is equal parts depressing. On its surface, the movie tells the story of a pet cemetery that was dreamed up by the pleasant-to-a-fault Floyd McClure, a life-long passion project for which he easily found investors. But the investors were eager to see a profit and when the cemetery failed to make back its budget, McClure was forced to sell the land and dig up the bodies of every dog, cat and goldfish he had buried there. The film ostensibly describes Floyd’s dream, witnesses the desecration of the animals’ graves, and tracks the family that owns the cemetery which incorporated them dislocated doggies. In reality, the story told on-screen cuts much deeper than that. Though there are hints about the meaning of religion, how people cope with death, the relationship between man and animal and the power of positive thinking, the theme that seems to bubble to the top is about the crushing weight of loneliness.

This is most beautifully illustrated in a lynchpin monologue delivered by Florence Rasmussen, asked to describe the day that the pets’ graves were dug up and explain her thoughts on the activity, but quickly side-tracked into a story about her ungrateful son and the life he’s left her to live. Her speech wavers from trying to downplay her solitude to outright rage at her boy. “I quit,” she says decisively, before finally getting to the matter at hand. It’s easy to say that Morris only wanted to make fun of the woman by letting her talk for so long about a subject unrelated to the pet cemetery, but this comes at almost the exact midpoint of the film. It speaks to the true concept driving the story, and the monologue is delivered with such a perfect sense of timing that if it were scripted it would be considered a masterpiece.

But it’s not just Rasmussen. There’s an executive at a rendering plant (a place that boils down animal carcasses to make other products) who laughs in his high-backed chair about how uneasy his job makes everybody. When his work is brought up at a dinner party, for instance, others indicate that they don’t want to think about that. People stand outside the plant picketing, a zoo which sent a deceased elephant to the plant had to cover up the fact that they did so, and he talks of people crying as they hand their dead pets over. It makes for a man who must laugh to cover up the strange disconnect he feels from others. One of the brothers who help manage Bubbling Well Pet Cemetery speaks in forced motivational speak, talking about the power of thinking positively and surrounding himself with trophies… all as a method of forgetting that his work involves brushing the frozen fur of long-dead animals and digging graves to bury them. Some of the beasts (e.g. Great Danes, greyhounds, horses, etc.) are as large as a man or more. His brother, a college drop-out, talks about his realization that dreams are childish things. He describes with a bitter sadness why he believes that everybody should suffer heartbreak, yet the tremble in his voice draws this stated belief into question.

And then there are, of course, the pet owners. These are people who cared greatly about their companions, and the loss of their pets are akin to losing a child. They have no qualms with altering their beliefs about the hereafter to include the idea that dogs will be able to get into Heaven. The movie pauses occasionally to silently look at each of the plaques on the graves of the animals. A few were alive maybe a year or two, but still manage to have glowing praise and elaborate grave markers. While some people cling to workplace philosophy, others have canine companionship. We’re all lost, in a way.

It all makes for one of the most entertaining, thought-provoking and genuine features that Errol Morris has brought into this world. It’s a spectacular piece that watches its subjects intently, that has its own ideas but is careful not to speak them aloud. It lets the people involved speak for it, and they’re more than willing to detail their thoughts, hopes and fears for the camera. It’s a monumental work, to be sure. Gates of Heaven may or may not be one of the greatest movies ever made, but it is – without a doubt – one of the best documentaries ever made.