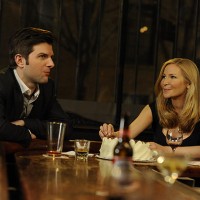 The negative reviews I have read for Jennifer Westfeldt’s romantic comedy Friends With Kids largely take issue with the film’s central conceit. The movie tells of two friends, Jason and Julie (Adam Scott and Westfeldt, respectively), who decide upon hearing the news that their friends will be having a baby soon, it’s about time that they do the same. Which is to say that although they are not romantically attached, they will have a child together and then raise it together, equally splitting responsibilities. The goal of this plan is to avoid the pitfalls of traditional child-rearing, the things that make you tear your hair out and become spiteful to your spouse and friends. By treating this like a business transaction, they hope to spare their friendship and do what they perceive is a better job raising their child than their friends have. The consensus seems to be that their plan works too perfectly, the simplicity of it and the romantic comedy aspects of it too unreal to take seriously.

I couldn’t disagree more. What struck me immediately about the film was how natural, how realistic the characters’ actions were throughout. Okay, I’ll grant that the premise of platonic friends sharing the responsibility of raising a child may be difficult to believe, but the reflexive rancor I’ve seen toward the film on this basis alone seems misplaced. I was impressed almost immediately, as Jason and Julie meet with four of their friends and initially hear that Leslie and Alex (Maya Rudolph, Chris O’Dowd) are expecting. The other couple, the recently united Missy and Ben (Kristen Wiig, Jon Hamm) kiss each other in celebration. It’s a tiny thing, but it’s perfectly played with the moment as both comedy and as an honest picture of how a new couple might act. It’s in those small moments that I find the most joy in films, the things that seem at first glance like an after-thought, but which are carefully planned. I thought of Diane Court tentatively placing her hand on Lloyd Dobler’s back in Say Anything when I was watching this film, but now I’m also thinking of the way that Robbie gasps “Oh god” when Cecilia says that she has to leave in Atonement, the way the characters stop their conversation and scamper quickly across the road in The Fantastic Mr. Fox, the grief-stricken antagonism of Robert Forster’s character in The Descendants. And this feeling, the movie maintains as it weaves in a wickedly dark brand of humor and an adult attitude (less forgiving critics like to use the term “potty-mouthed”).

Fast-forward four years after this initial dinner revelation. The group is getting together again for to enjoy one another’s company, but this time Leslie and Alex bicker at one another about who should be watching the children, whether one is putting more effort into the household chores than the other, and so forth. Once again, this is done with a startling naturalism, as though these are not actors but instead actual people with actual children whom they must struggle with. Missy and Ben are in even direr straits, their previously unstoppable flirtation replaced by resentment as the birth of their own child. There’s a feeling of tension in the air as the six sit down to their dinner; Missy and Ben snip at one another in a manner that they feel is subtle, but which makes everybody at the table incredibly uncomfortable. Yes, the scene ends with one of them storming away from the table, which we’ve seen a hundred times over in other movies about relationships turned sour – but how often have we seen the stumbling lead-up to divorce played with such precision? And in a riotous comedy, no less?

And it is very funny, in a cynical way. After the dinner party that has Ben and Missy having an all too public meltdown, plus the petty nagging that Alex and Leslie reserve for one another, our two protagonists quickly find their way to a bar to drown the memory. They decide that having children has made their friends mean. After describing the process of childbirth in detail, Jason concludes, “And then no sleep for, what, two years? Yeah, that’ll make you mean.” Hence the plan and the plot of the movie, which it may sound like I’m avoiding but really I just don’t think is as interesting as the ways in which these six characters act around one another. The fact that Jason and Julie decide to have a child together is not nearly as interesting as the uncertain, and sometimes even offended way that their friends react to it. When Julie meets a great guy, he has questions about the way that they plan to respond to the child when he grows old enough to understand the peculiarity of his parentage. His questions aren’t meant as attacks, but they leave the two friends at a loss for words. Of course it’s a bit unfair because any divorced couple with young children would have to face an almost identical dilemma, but the way this man’s sincere curiosity and concern twists in the air into something condescending and judgmental makes for an electrifying scene.

I do feel that the film takes some rather cloying missteps, however. There’s a moment that Jason and Ben share that is obnoxiously preachy, and as the film feels compelled to fit the romantic comedy mold, it should probably come as no surprise that there’s a last-minute mind-change complete with an awful triumphant rise in the score. Additionally, although I fully understand the concept behind the final lines and appreciate why they were selected, I still felt taken out of the action a bit by the bluntness of Jason’s dialogue. Not the bluntness so much, but the knowing attempt at raising the stakes with an edgy close before the credits roll.

In the grand scheme of things, these complaints are minor to me when compared with how wonderfully genuine the characters seemed to behave prior. I initially had reservations about the final act of Say Anything because I felt that it drifted too far toward the unreal. My love for the majority of that film led me to watch it many, many more times and now I can fully appreciate that film’s denouement. Perhaps, if I see this movie again and again, I’ll similarly come to embrace an ending which right now feels like a break from the consistent tone of most of the action.

I definitely look forward to finding out.