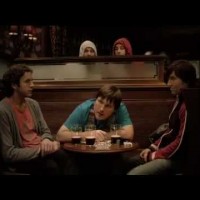 I’d like to see a movie about time travel which truly embraces the creative freedom that the conceit grants. That is, a time travel story that plays with story structure in disorienting, abrasive ways – say, by putting the film’s climax 30 minutes into the film, having the discovery of time travel ability introduced a short while later, and filling the rest with scenes developing the plot, but in no discernible order. What I’m envisioning is essentially a time-traveling version of Memento, but with scenes spliced randomly rather than in a linear fashion. The only work I’m aware of which has attempted something similar is The Time Traveler’s Wife, but even that took an easy route by centering the tale primarily in the perspective of the stationary spouse. The British comedy Frequently Asked Questions About Time Travel doesn’t have the confidence to pull even this off, relying instead on a fairly unchallenging story of three friends who wander around in circles through time and, oh yeah, there’s a lazy romance subplot because, I mean, that’s what you do in movies, right?

I suppose I may be coming down too hard on the film, which is generally pleasant and inoffensive. However, I do think there’s a difference between taking the Zemeckis approach to time travel, wherein a character finds himself in a different time and simply has to remain unseen while trying to find his way back to the present, and the approach favored by independent science fiction filmmakers, which requires attention to detail in continuity, abiding by self-enforced rules, and invariably sorting out some additional deeper mystery beyond “how do I get back to where I started”. If FAQ had embraced the wondrous spectacle of the Zemeckis tack, being merely pleasant may have been enough to view the film as successful, but instead the movie prefers to feign intelligence while its characters try to sort out their dilemma. This becomes especially maddening when the movie ends with several loose threads still dangling. Not that movies have to come to clear conclusions to be successful (the ambiguity of Christopher Nolan’s Inception is part of its charm), but there’s a difference between “ambiguity” and “disregard”. A kinder critic might say something about the journey being more important than the destination, but with no destination at all the journey itself loses a lot of its appeal.

Let me provide an example: after pals Ray (Chris O’Dowd, Friends With Kids), Toby and Pete accidentally stumble upon a “time leak” in the bathroom of their favorite pub, they find themselves at one point in a post-apocalyptic wasteland, with buildings in rubble and thick layer of snow signifying the beginning of a new ice age (or maybe just winter, I don’t know). While rooting around in the rubble for an item to fashion into a weapon, Pete stumbles upon something quite curious: a large painting of the three friends with seemingly religious overtones, applied in large strokes to the side of a one of the few remaining buildings. Adding to the mystery, the tableau depicts the three in the exact same clothing that they are currently wearing. What does this mean? Who has created this, what is its significance, why have the three apparently come to be revered? If you’ve been paying attention at all, the answer to this turns out to be… nobody knows. Well, somebody within the universe of the film probably knows, but FAQ doesn’t deem it necessary to provide explanations for the viewer.

Please don’t tell me that the plot of the movie was all in service of building the unconvincing romance that Ray has with a time traveling hottie named Cassie (Anna Faris). Her character, by the way, makes no sense at all – a time-plumber, basically, who travels through the past plugging “time leaks”, despite being totally inept in the ways of time travel. She shows up every once in a while to have a “sweet” moment with our hero where he mostly smiles a goofy smile at her while they make no human connection whatsoever, she informs him that she’s gotten a promotion at her job, then she suddenly has to leave. This is what passes for character building for FAQ, Cassie’s growing fondness for our boy Ray a result of off-screen bonding (she met him other times in the future that we didn’t see and that’s where the character growth took place) rather than anything the screenwriters could bring to the table. Similarly, I found myself wondering what Ray and Toby were doing hanging out with Peter in the first place – he spends every moment ridiculing his friends’ love of science fiction, and seems oblivious to its culture to the point that he mixes Star Wars and Star Trek references, which is heretical. Once again, it’s a product of lazy writing: there’s an inherent irony in the one character who is most averse to science fiction becoming the person who is pushed mostly deeply into its muddy waters. That’s the concept that was undoubtedly the genesis of the character, never mind that it’s impossible to believe that he could be an intimate part of this little group while hating everything his friends hold dear.

But then, I did say that the movie is generally pleasant, didn’t I? If you can manage not to get hung up on character dynamics or plot comprehensibility, FAQ can be charming. Once the three friends get into the heat of racing through strange and exciting time periods, their banter is quickly paced and fun. It’s not hard to see how many have made comparisons to Shaun of the Dead – there’s a very similar dynamic (an unkinder critic might call it a rip-off) in the slovenly friends who wisecrack their way through a catastrophic event, their brainy brawn allowing them to get out of numerous scrapes. As a time travel movie, it falls miles short of the dense narrative of greater works like Primer and Timecrimes, and in the realm of apocalyptic buddy comedy it’s a far reach from the work of Simon Pegg and Nick Frost. But if you’re just looking to take a dip in the shallow end of the science fiction pool, you could be wading in worse than Frequently Asked Questions About Time Travel.