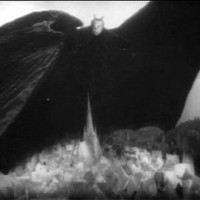 The only other film I’ve seen from director F.W. Murnau is 1927’s Sunrise: A Song of Two Humans. That film is celebrated for its inventive technical style, and this earlier work is no different. There are a slew of remarkable and memorable images throughout, as Murnau casts the allegorical tale of a man who sells his soul to the devil in exchange for unlimited power first as bleak horror. The tone shifts radically throughout the movie, sometimes in confusing ways, but the special effects and the broad morality tale both carry remarkable weight even today, almost 90 years after the fact.

This is a movie that literally begins with the Four Horsemen of the Apocalypse riding in the scene on monstrous steeds, harbingers of Mephisto – the devil. Murnau’s Mephisto is horrific: twisted horns spouting from his head, teeth gnashing and body burnt black with evil. A grand statement is being made by opening with this character rather than the titular Faust, setting the stage for the wicked plot about to unfold. Mephisto strikes a deal with God’s representative angel to test Faust’s faith (sound like anybody we know?), and it’s good timing too because our man Faust is just about fed up with life. An old man, Faust labors in vain to find a cure for the plague that is spreading around Italy – men in haunting white robes collect the bodies of the dead on a seemingly hourly basis. After watching another woman die, Faust declares that faith and knowledge both are unhelpful in this world, chucking all of his books into a great fire. It is from this that he notices a Biblical passage which reads more like a witch’s spell, describing in detail how to conjure the Devil to take control of his power.

The spell involves standing in a crossroads and surrounding oneself in a ring of fire. It doesn’t say anything about selecting an area in the middle of nowhere, or about going about this task with only the full moon lighting the scene, but this is Murnau’s distinctive style – he rightly plays up Mephisto’s appearance in Faust’s life in darkness, giving the scene an eery chill. In human form, the demon is no less creepy than when we first met – the limitations of the silent film era work in the movie’s favor, allowing the antagonist to come across as solemn and menacing. He need only have the right look: the cinematography will do the rest.

Of course Faust makes a deal with the devil and the power corrupts him to the point that he transforms himself into Prince Ali Ababwa at one point, all to steal away a woman from her lover on their wedding day. I’m not spoiling anything by saying this, as the term faustian bargain is shorthand for becoming corrupted by power especially when said power is seized with the best of intentions. Here, Faust intends to use his newfound abilities to cure Italy of the plague and feed the hungry – a noble goal, to be sure – but when the townspeople notice his sudden aversion to Christian imagery, they throw stones at the old man and he realizes that what he’d really rather be doing is getting chicks. Mephisto transforms Faust into a young man and the two take a magic cloak ride to another sleepy little burg where our “hero” sets his sights on the virginal Gretchen as she returns from Easter mass. It is here that the film makes a radical variation in its tone, changing from a dark tale of the limits of man’s goodness to a bizarre romantic comedy, albeit one where the Devil himself is a major character.

I don’t think I’m saying anything revolutionary when I note that this section is the film at its weakest, and I admittedly found myself wondering just what the purpose of it was. Gretchen must sense somehow the now young Faust’s aura because she runs away in fright anytime he approaches. Meanwhile, Mephisto wrestles with the girl’s amorous mother who falls in love with the demon after drinking a draught of love potion (or was it just vodka?). This repeats itself for a while: Faust approaching the fair Gretchen, she seeking refuge from his horrible smiling face, her mother chasing the devil round and round for comic relief. Do we need comic relief in a movie that began with a confident horror bent? When the movie stops running in circles is when it reaches its greatest heights dramatically speaking, although most of its technical marvels come in the first act. Faust’s flight to Gretchen’s homeland, for instance, is an awesome sight – the camera swooping over a startlingly realistic model of the Italian countryside with clouds obscuring the view.

The reason that the final act grows so dramatically appealing is because it becomes clear here that the protagonist of the tale is not Faust at all, but rather Gretchen. We are led to believe that Faust has a purity which makes God put his faith in the mortal, but as he uses his power for personal gain the side effects spin wildly out of control and all of the blame falls on Gretchen’s young shoulders. She is accused of harlotry by her dying brother and afterward humiliated in the stocks, watches her mother fall to the plague and is thrown out of her home. She gives birth to Faust’s son and must protect the child from the biting wind while stranded outside in the quickly accumulating snow. Nobody will help her because of her supposed moral transgressions, and the girl all but resigns herself to death, clutching her child tightly to her chest to keep the poor thing warm. In a brilliant bit of make-up work, we can see tears frozen to Gretchen’s cheeks as she sits dejectedly in the snow. She hallucinates a warm cradle for the child (perhaps the work of the Devil?) and is afterward accused of murdering her baby. The townspeople throw her in a dank cell while they prepare to burn her at the stake. In the most heartbreaking scene of the film, she cradles her elbow for a while, thinking it is her child, then searches frantically in the straw for the baby once she realizes her mistake… slowly halting her search when the reality of her situation sets in.

And all of this is Faust’s fault! Is it just a coincidence that the title looks oddly like the word “Fault” when first displayed on the screen? Gretchen is tortured, both physically and mentally, for Faust’s sins. When he realizes the pain he’s caused the girl, Faust curses the devil’s trickery, saying that all of her suffering could have been avoided if he had not been cursed by wishing for youth. In perhaps the most poignant line in the entirety of the film, the Devil responds, “It is you who cursed youth.” But it’s not his own  youth which Faust cursed, instead the youth of Gretchen, described from her introduction as innocent. It’s a bit of sadistic humor that she first appears in the film during a celebration of Easter (when Jesus was resurrected) because when Faust sees the girl is the beginning of her slow demise.

Overall, Murnau’s vision of the classic Faust tale is a darkly ambitious one, piling tragedy upon tragedy with a keen technical expertise that lends gravity to otherwise simple scenes. It may be easy enough to overlay two images so that the Devil appears to reach into a raging fire, but then to have the character grow into a gigantic shadowy creature that fills an entire room – that’s thrilling and inventive. The film is unfortunately hurt greatly by its silly mid-section and by a sloppy, sappy conclusion. If those grave missteps can be ignored, the rest of the film is a marvel.