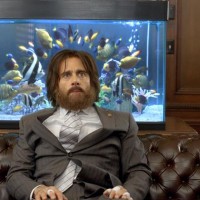 If IMDb Trivia can be believed, there are myriad religious in-jokes which are subtly mixed into the mess that is Evan Almighty, things like references to Yiddish proverbs – things that require a greater amount of forethought than shoe-horning in references to Genesis 6:14 (“make thee an ark of gopher wood”) throughout the film. It’s interesting to think that so much thought was put into these smaller moments, Biblical jokes that few are likely to understand, when the plot that is front-and-center begins ominously with a dog sticking its nose in our hero’s crotch. Why? Because crotch jokes are funny!

The plot concerns Evan (Steve Carell), who you might remember from Bruce Almighty as Jim Carrey’s nemesis. He’s recently gone from news anchor to Senator, I guess able to overcome the YouTube footage of himself babbling incoherently on national television because I’m sure his opposition would deploy that weapon without shame. In any case, he’s moved his family to a still-being-built D.C. neighborhood known as “Prestige Crest” because literalism ain’t no thang. Evan seems to be a good guy all in all, but his oldest son is getting angry at him for caring about his damn job so much. He obviously didn’t get the memo that running a campaign for political office in the nation’s capitol and retaining that job takes an immense amount of commitment, so the boy’s content to pout about how dad keeps reading bills which are going to be put to vote like a jackass rather than going for a hike with his family.

Enter God (Morgan Freeman), unreasonably preoccupied with current and former employees of a single New York television station, to tell Evan that he needs to build an ark – and then to gather every animal onto this ark, two by two just like in the fable, to await God’s wrath. Well, this comes at an inopportune time! Evan is the new kid in Congress and everybody’s looking at him to carry the torch, especially clearly-evil Congressman Long (John Goodman). Evan is initially reluctant to drop all of his responsibilities to build an ark, but God tells him that it’s not intended as busy work and he’s certainly not trying to ruin Evan’s life. After all, God loves his creation and “whatever I do, I do out of love”. For example, God loves just fucking murdering people. Who doesn’t? The movie doesn’t really linger on this, treating the fact that God has killed before and is preparing to kill again as less a dark nightmare, more a hilarious joke that allows for Steve Carell to have multiple scenes with animals following him.

But I guess it’s a children’s movie, after all. I use that terminology specifically, rather than calling it a “family movie”, because Evan Almighty is so unabashedly stupid that there is no way it could appeal to adults. At one point, Evan is standing in the middle of a Congressional hearing with cameras turned on him when suddenly a zoo full of animals – species which would never cohabitate in real life – burst into the building to bow down at Evan’s feet like he’s their king (but what’s a king to a god?). Despite this impressive show, everybody laughs him out of the building as a lunatic. I don’t know how you trained animals that would normally tear each other to shreds to peaceably assemble in the Capitol Building, but it’s obviously just an elaborate prank! Also, in a bit of theft from The Santa Clause, Evan finds himself suddenly sporting a fast-growing beard which reappears as soon as its been shaved away. Why having a beard is necessary to construct an ark is beyond me, but hey – whatever works, right? This new-found facial hair lends itself to many a hysterical scene wherein our hero attempts to hide the growth from the sight of his co-workers by holding magazines in front of his face. Ha ha! He doesn’t want them to know! And when they do find out, everybody wants to know why he grew a huge beard in 24 hours instead of how.

But most damning of all is the casting of Wanda Sykes as Carell’s co-worker and confidante. The woman is utterly obnoxious and intensely unfunny, the stand-up comedian equivalent of latter day Geico commercials. There’s no possible way any adult could stand her, let alone enjoy her presence in a film, and Sykes is the film’s placekicker – primarily saddled with the responsibility of making the final one-liner before the scene cuts away. When a flock of birds of all different species and colors swoops into Evan’s office as he’s giving a presentation to a group of Senators who are on the fence about whether to vote ‘Yea’ or ‘Nay’ on Congressman Long’s “Drill, Baby, Drill” bill, the idiots we put in charge see the display as an inventive debate technique and agree to vote for the bill. Wha? Just go with it, don’t ask questions, and cut to Sykes: “If I get the bird flu, he’s gonna pay all my medical bills!” What wit! Actually, to be fair, maybe my predisposition toward disliking Sykes is not allowing me to see that it’s the writers who are at fault for groan-inducing lines such as these. After all, it’s not Sykes who forced the camera to focus on a movie marquee reading “THE 40-YEAR OLD VIRGIN MARY”. Alternate suggestions: Crazy Stupid God’s Love, Dan in Real Purpose-Driven Life, Little Miss Son-of-God shine. Hey Tom Shadyac, call me!

So maybe God does sort of ruin Evan’s life, but as the Big Man explains, “You’ve gotta crack a few eggs to make an omelette.” No, you don’t – you’re God! You can make an omelette appear out of thin air! Evan does go about building the ark, which is mostly an excuse for a seemingly endless montage of Carell hitting himself with boards, smashing his fingers with hammers, and falling down. Isn’t this funny? Sometimes it’s scenes of animals handing him tools and acting like they be humans! Isn’t this cute? One reporter on the scene (played by Ed Helms, Carell’s replacement on “The Office” – will he be in the next one, Ed Helms Almighty?) asks, “With all these species, what’s being done about the feces?” It’s played as a joke, but the question of logistics is a real concern that is totally overlooked.

Or maybe it’s not. Maybe it’s just an End Times movie for the kiddies. We’re all doomed, but let’s have fun with it! Perhaps I’m being too cynical about this whole thing. Maybe Evan Almighty, like the book it’s loosely based on, should not be taken so seriously.