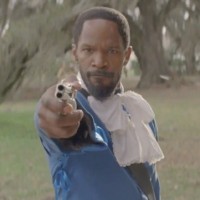 The first film I saw from director Quentin Tarantino was Kill Bill. I didn’t know what to expect at all; aside from the television ads I’d seen which gave the impression of a candy-coated action flick, I had no familiarity with Tarantino whatsoever. From the opening scene of The Bride being shot in the face at close range, it was clear that this was a film which was willing to put its audience in queasy situations in the name of inspiring a visceral reaction. And from the pastiche of various genres that the film employed (it goes into anime at one point), it was clear that it had been made by a filmmaker who enjoyed playing with the medium. It was thrilling. I’ve now seen every film that Tarantino has directed, all of which are hugely entertaining, and I have been looking forward to the director’s latest outing – Django Unchained – for some time. I am relating my introduction to Quentin Tarantino at the outset because I want it to be clear that I do consider myself a fan of the man’s work. At their best, I’ve found his movies to be beautifully rendered and expertly crafted. I favorably compare other movies and television shows which maintain a perfect sense of tension to Tarantino’s work on a regular basis. I had high hopes for this newest title heading into the theater. And yet I walked out convinced that Django Unchained is the director’s weakest offering.

Where I’ve heaped praise on Tarantino previously for his sense of constraint, his latest seems broad and sloppy. It tells the story of a slave named Django (Jamie Foxx) who is freed in order to assist a German bounty hunter named Dr. King Schultz (Christoph Waltz) in tracking a group of brothers only he could recognize. Once that deed is completed, Schultz and Django trek across the Southern U.S. in order to find and free Django’s wife, Broomhilda (Kerry Washington). When Django teams up with Schultz and finds the Brittle brothers on the first plantation they visit, there’s a sense of righteous justice being doled out by our man’s take-down of the cretinous crew they’ve happened upon – the first of several gripping moments throughout the movie. But it only works on a scene-by-scene basis, as the incident with the Brittle boys is just that: incidental. A tighter screenplay could have edited out some of the excess by putting Django’s introduction to Schultz’s way of life and the realization that his wife is being held captive at a Mississippi plantation with the ironic name “Candie-land” closer to one another. Perhaps it could be through the meeting with the Brittles that Django learns of his wife’s whereabouts. Instead, though, the movie meanders about a bit and then places the heroic duo in Candie-land under the guise of purchasing slaves for fighting.

Deception, hidden identities, uncertainty what the opposition knows or how thick their streak of depravity truly is – these are part and parcel of the Tarantino experience and I’d be lying if I said that there were no points within Django Unchained wherein these elements are handled with style. For instance, the first time that Django and Schultz meet the eccentric Calvin Candie (Leonardo DiCaprio) in his opulent parlor while two men battle to the death near the hearth is a particularly stunning scene. Too often, though, the film strays into indulgent digressions. A scene involving Australians feels peculiar in how unaffecting it is; there’s a strange training montage despite the fact that Django was shown already to have preternatural marksmanship with a six-shooter. And most unsettling is a lengthy sequence wherein a horde of racist white men argue about the utility of the Ku Klux Klan-style hoods they’ll be wearing as they ride over a ridge. The scene is interminable and the humor embarrassingly forced – making the scene uncomfortable for all the wrong reasons.

Additionally, those shocking moments of brutality that Tarantino has built a reputation upon typically fall flat in Django Unchained. Where the director’s masterful debut Reservoir Dogs toyed with the audience’s nervous anticipation in the infamous “ear” scene, and where the tension was heart-stopping whenever the Nazi Hans Landa was moments away from finding Shoshanna in Inglourious Basterds, the same can not be said here. More often the dramatic moments have an emphasis on being stylish rather than cultivating an emotional investment from the audience. Early scenes where Schultz brandishes a weapon (in the woods when Django is first acquired and later in a saloon), and a scene later on involving a pack of dogs is alleged by the movie itself to be stomach-churning but comes nowhere near matching the intensity of Tarantino’s prior work. Then there are Schultz’s final actions, meant to be resolute and to some degree cathartic, but which feel totally unearned. The use of extreme violence in this film is toward “shocking” rather than provocative ends. What I mean is that where it is employed, it is employed for its own sake rather than as a way of specifically driving the narrative or engaging the viewer. People’s heads explode in a gooey red mass when they get shot – not because such imagery adds to the story in any meaningful way, but instead because it looks cool.

And again, sometimes it does. On a scene-by-scene basis, there’s a lot of “cool” things going on. As director, Tarantino doesn’t chew the scenery – he sprays it with fake blood. But what has made the man’s work so singular in the past is the delicate balance between the winking nods that, yes, this is a movie, and the gut-punching drama at work within that same movie. Django Unchained tips the scale toward the former. Choosing to focus on form over function leaves the film feeling unhinged; too loose and uncoordinated to take seriously. DiCaprio does his damnedest to lend gravitas to the proceeding by infusing the heinous Calvin Candie with a sophisticated form of sadism meant to match Waltz’s own work in Inglourious Basterds, but there’s a constant sense of being removed from any true terror, which undercuts the performance. Although the movie is fun at times, I remain largely disappointed by it.