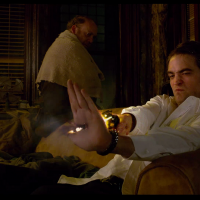 It’s telling that the films of director David Cronenberg which focus on extreme violence in a suburban environment or the inner workings of the Russian mob are regarded as the filmmaker at his most sedate. With a clear penchant for biological science fiction, Cronenberg’s best work bends the fabric of the film’s reality, blurring the line between animal and machine in sometimes sickening ways. The stellar Videodrome, for example, finds star James Woods discovering an opening in his stomach within which he can insert videotapes. Yeah. When that kind of development is seen as a defining element of your style, it’s no wonder that recent releases set in a realistic environment would, by contrast, seem lackluster despite their merit otherwise. So initial viewings of the teaser for the director’s latest film, Cosmopolis, left me with a wonderful giddiness. The neon lights (reminiscent of the opening titles of Enter the Void) combined with quick flashes of absurdist violence and giant rats clambering over a city in riot spoke, in my mind, of the director returning to form: getting back to his roots and dusting off the bizarre.

In actuality, the film is less bizarre than simply peculiar. It may sound as though I’m arguing semantics, but the two states are quite distinct. I turn to Videodrome again here because I think of it as the director’s most accomplished work. In said film, the creeping suspicion that something is not right rises slowly into the forefront of the viewer’s consciousness. By the time that the greatest special effects excess arrives, the viewer has been sufficiently drawn into the characters’ lives that the sudden upheaval of reality is as disorienting to the audience as it is to the protagonist. Similarly, in Cronenberg’s excellent 1986 take on the sci-fi classic The Fly, star Jeff Goldblum’s demeanor suggests from the start that something is off balance. This sure-footed handling of the pace and tone of the films adds significantly to the electrical charge that make these films so compelling. By contrast – and perhaps this is as much a fault of the source material as it is the director’s handling of it – Cosmopolis feels stiflingly constrained.

And I’m not just referring to the fact that the majority of the film takes place within the technologically-bedecked stretch limousine of our anti-hero Eric Packer (Robert Pattinson), either. Much like the vehicle, however, the film’s structure follows a single track, the various few departures from the confines of the car less a natural, exciting development and more a calculated digression. Perhaps that’s, to some degree, intentional. A millionaire several times over by a very young age, Packer is carried at a creeping pace through a near-future New York City, while outside the financial system goes haywire and the streets become clogged with frustrated every-folk all too ready to riot. It’s madness, a hellish sight that Packer is only barely concealed from on his trek across town (ostensibly to get a haircut). But with his empire crumbling with the nation’s economy, Packer’s slog through the streets is less a journey than a heavy march, each step forward measured precisely from the one before.

The spoken dialogue matches the film’s robotic structure. Without exception, each character speaks entirely in high-minded prose, using words that appear philosophical at first blush yet ultimately are devoid entirely of meaning. One might be able to grasp a stray thought here or there in an attempt to attribute to it some abstract purpose, but the film is happy to allow its hollow philosophizing to exist for its own sake; dead-eyed caricatures mouthing the words without passion. The way that characters talk is devoid of all emotion (which actually works in Pattinson’s favor, given his lack of range as an actor), flatly stating their opinions on marriage and money and man’s purpose in life. At one point late in the film, Packer listens while a childhood friend and his limousine driver both recite stories about their time driving taxis as younger men. Neither seems to hear the other, though they speak in a syncopated rhythm; each stares blankly into space while reminiscing about the hardships he faced in his youth, putting in hours behind the wheel of a taxi cab. What purpose does the scene serve? As with the rest of the film, it appears to be more about the pattern of speech than its utility, so long as the words smack of a futile desperation.

The final act does little to disrupt the miserable aloofness present throughout the rest of the movie, but it introduces Paul Giamatti as a wild-eyed former employee of Packer’s to serve as something of a foil. Where Packer speaks in a deliberate, authoritative manner, Giamatti’s character speaks rapidly, pacing nervously around the room and questioning himself. The content of his speech is no less florid and impenetrable than that of any of the other characters, but I couldn’t help feeling that Giamatti was bringing something to the table that none of the other players had: a sense of being alive. Once again, if I were being generous, I might try to convince myself that this uncoordinated, stammering, argumentative character were being deployed with the intent of drawing attention to the way he clashes with the rest of the characters within this world. That may not be too far from the truth, actually, but the question keeps ringing in my head: what purpose does the scene serve?

The source material for Cosmopolis was written with the dot-com bubble in mind, the point where promising internet start-ups started losing money and the country went berserk. The current economic climate, one of Wall Street protestors, staggering unemployment and a seemingly limitless recession have led many critics to interpret the film through the lens of contemporary events. Yet interpretation is the best that can come from the film; beyond a curiously simplistic tableau of aching movement through a congested cityscape, the dialogue offers only vague indictments of capitalism and wealth that have a smooth, persuasive sound in the moment but easily flit away almost immediately afterward. Unfortunately, rather than a return to the confident unease that characterizes Cronenberg’s best work, Cosmopolis is just a joyless slog populated with bland ciphers. A real disappointment.