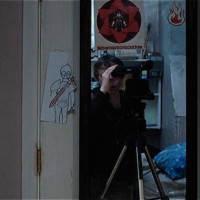 My feelings on what to expect from Chronicle were mixed, from having only seen the trailer. I was intrigued by the concept: a group of friends mysteriously gain superpowers – specifically telekinesis – and proceed to use these new-found gifts to play pranks on strangers and make Pringles float toward their mouths from afar. My enthusiasm was tempered somewhat by the larger gimmick being served, the faux documentary style that has become so annoyingly common on television and in film, wherein the entirety of the picture is presented from the point of view of a camera that one of the characters inexplicably carries around (television shows tend to abandon the conceit that a camera crew is actually present very quickly).

Much to my surprise, while the hand-held camera aspect of the production is gimmicky and sometimes difficult to believe, it’s handled with enough care that the camera really does remain a physical character within the story, rarely relegated to simply providing the framework for the action. We often see the camera in reflection, as when Andrew (Dane DeHaan) first begins filming the door of his bedroom as his drunken father beats angrily on the other side, or when he thoughtlessly turns the lens toward the sideview mirror while riding in his cousin’s car. When the camera is dropped from a great height later in the film, the image spins and twirls on-screen as we watch the scene, not from the point of view of any of the characters but instead from that of the camera itself. After exploring a mysterious cave with a glowing orb in the middle of the woods, Andrew and his friends gain their staggering new powers. From this point forward, the camera is often held overhead by the power of their minds. In one memorable scene, Andrew allows the camera to float above the trees, looking directly down as he takes revenge on a group of bullies.

So with my initial fears about this stylistic choice bated, what of the actual plot of the film? The concept is played with a remarkable assuredness. The boys begin playing harmless tricks with their powers, curving the trajectory of baseballs mid-flight, making shopping carts roll away from people, causing leaf blowers to blow girls’ skirts up – all the juvenile things one would be tempted to do when granted such abilities. As they continue to exercise this telekinesis in secret, though, it soon becomes apparent that they are each growing stronger in their abilities. It’s clear from early on that there will eventually be a rift between the three, but the way that it slowly grows until finally lashing out violently is spectacular. The film shows restraint in getting to the preordained moment when these self-appointed gods must ultimately duke it out, preferring instead to place the majority of its focus on the wide-eyed wonder that comes with finding oneself in such an exclusive group to begin with.

Of course, Chronicle doesn’t get everything right. The rift in the group is easy to see coming from miles away, and it’s predicated on absurdly cliched factors: an abusive parent, a dying mother, the popular kids being malicious. Whether as a result of this flat characterization or simply coinciding with it, any attempts at bringing forth an emotional center to the film’s relationships has no hope of succeeding. We never feel that there is any true camaraderie between Andrew, his cousin Matt (Alex Russell), and their pal Steve (Michael B. Jordan). What I mean is that although they may hang out and laugh with one another and seem to get along, there is nothing to their relationship aside from their shared secret. So when the movie has Matt take the camera away from Andrew momentarily, speaking to the future Andrew who will watch the tape later on, describing how much he loves him… it feels entirely weightless. We’re not given adequate reason for such a strong emotional display. Similarly, Steve generally runs in different circles than the other two: he’s extremely popular, plays on the football team, and is running for class president (as much a series of cliches as Andrew’s home life). Yet we’re expected to accept that he swiftly falls into a “best friend” relationship with both Matt and Andrew, suddenly realizing how cool the two are?

It rings false, as do most of the interpersonal relationships on display throughout the film. For instance, Matt has a crush on a girl in their class named Casey (Ashley Hinshaw). Casey is the owner of a video blog which gives her an excuse to carry a camera around throughout the film as well, and allows the image to cut from Andrew’s camera to hers for multiple shots of the same scene. Her blog is never actually seen or referenced except as a way to include her in scenes – or more importantly, to include her camera in scenes. Regardless, one might try to defend the tepid relationship that she and Matt share, saying that it reminds the viewer that these are normal high school kids at heart, with normal high school problems. But the two have so little chemistry that it’s all too easy to see her less as a legitimate love interest and more as a prop for the actual character to lug around (the real character being, of course, her camera).

Despite this poor handling of the characters themselves – allowing them to sink into shoddy archetypes – and of the relationships between said characters, I still found myself enjoying the film greatly. The action ramps up over the course of the film incrementally, the tension growing ever tighter so that a finale that might have otherwise come across as campy and ludicrous instead maintains a serious chill. The camera gimmick is used much more liberally as the film progresses, but the use of different camera types provides new depth to the scenes. There’s a different atmosphere garnered from a handheld camcorder than there is from an iPhone recording than there is from a news camera shooting on location, and those differences are utilized to wonderful effect.

I can’t deny that Chronicle has its weaknesses; they’re hard to ignore. But it manages to overcome them by being a wild ride from beginning to end. Even though we may be able to easily see the outline of the plot, the way it gets there is engrossing and brightly imaginative.