It’s that time of year again, when the full moon rises and the undead slink out from the pit of Hell to wreak havoc in low-budget horror flicks. Scary! While some may hide under their covers, shivering with fright, we here at GlasgowtotheMovies.com fully embrace the terror. But don’t worry, children, as long as you look the monsters in the eye and tell them you don’t believe that they’re real movie stars, they can’t hurt you. Keep your flashlights on, stay together, and… wait, shh, did you hear something? It was probably noth– there it is again. Okay guys, this isn’t funny, I know you’re just trying to scare me. Seriously, cut it out, we’re doing the list now… 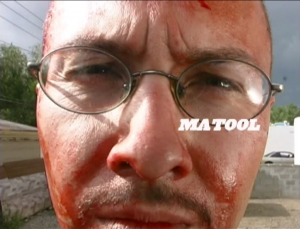 In the not-too-distant future, the country has become infested with the living dead. The only person with the cojones to take on the gray-skinned infestation is MATOOL. Matool, for whatever reason, is an awesome zombie-punching machine, but his life is flipped turned upside down when he’s kidnapped by a couple of swingers who want him to join in on their life of debauchery. When Matool asks his captor Nathan why he’s been brought to their home, Nathan scoffs, “What do you think?”
“I think I’m here to get get it on with your wife,” Matool replies, coolly.
“That’s the plan,” Nathan concedes.
Yeah, that’s the kind of movie this is. There’s a sex-zombie chained up in a shed out back, too, for those special occasions. And of course, all of it is done with minimal budget and the absolute worst acting. It’s all worth it in the end, though, because at least we get to say the name “Matool” over and over again when we’re talking about it. Matool. Matool Matool Matool, Matool. 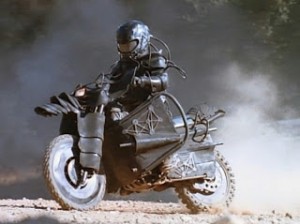 A motorcyclist driving through a top-secret government facility gets hit by a meteor and becomes a hell-being bent on destruction. What this means is he drives around in slow-motion shooting lasers at innocents, then suddenly disappearing into thin-air via the magic of… cutting to a new scene. Among the elite team sent in to fight this monster are a handful of army men, a doctor, and a woman practiced in the art of telekinesis. “A more accurate term would be psychometry,” she corrects. But there’s really only one reason to see Murdercycle, and that’s to see Christian film star David A.R. White out of his element, playing a geeky scientist in a movie that seems like it belongs on the SyFy channel. The action is sloppy, the characters grating, the bad guy… um… a guy dressed in black, riding a motorcycle.Chilling! 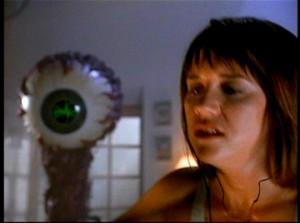 Oh yes, this is absolutely a movie about a six-foot walking eyeball that gets zapped into our universe from a portal to the eight dimension (do you suppose it’s putting plan nine into effect?). Though calling it a “killer” eye is a bit of a misnomer because, as it slowly meanders through an apartment building, somehow totally evading detection by most of its residents and the, um, mad scientist that lives there, it does not get a lot of killing done. In fact, what its focus (get it?) seem to be is having sex with human women. You heard right: a giant eyeball uses its optic nerves to violate a bunch of women. There’s a wonderful shower sex scene with the eye that has to be seen to be believed. The actors are delightfully bad, some of them clearly modeling their performance off of better-known characters, and the dialogue + line delivery is amazing. “I bet you wish you had some Ray-Bans right now!” one character taunts the eye in a pivotal scene. “Yeah!” another character chimes in. Brilliant. 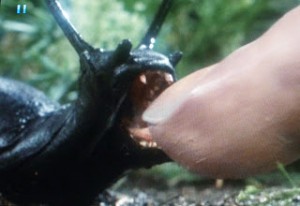 Juan Piquer Simon is a master director, and his Slugs is typical of the man’s work. You’d think that an army of killer slugs would be easily avoidable by, I don’t know, walking slowly in the opposite direction, but a great number of people fall prey to their vicious bite. They didn’t believe health inspector Mike Brady when he suggested that meat-eating slugs were killing residents of their small town, but a trip into the sewer revealed the seething mass of slimy murder lurking just below the town. Brady wants to declare a state of emergency, but the chief of police isn’t ready to throw in the towel. “You don’t have the authority to declare Happy Birthday!” he yells at our man Mike, probably the most quotable line in a movie full of them. And yes, I know you’re curious, the slugs do devour a teenage couple while they’re having sex. They should have used protection… that’s why I always keep Morton salt on the nightstand. 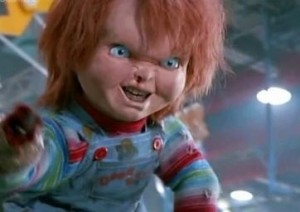 Okay, this is a little bit unfair because the second in the Child’s Play series is legitimately awesome. Chucky is back to terrorize young Andy again, intent as ever at stealing his soul and swapping bodies. The final battle, which pits Andy and Chucky against one another in a brightly-lit toy factory, dripping with bold primary colors and moving mechanized arms, is a real treat. At one point, Chucky’s arm gets ripped off and he shoves a knife handle-first into the stump so that he becomes a walking weapon. As sequels ought to, the movie one-ups its predecessor in violence and scares, plus there’s hints of the black humor that would eventually become the defining characteristic of later efforts in the series (Bride of Chucky, Seed of Chucky), as when an adult references the killings Andy witnessed in the first movie: “The murders traumatized him, but kids bounce back quickly at this age…” Along with Plan 9 from Outer Space, the dubious honor of being named one of the Worst Movies Ever Made has been handed to Troll 2, which tells the story of a family who vacations in the small town of Nilbog (read it backward) and is eaten alive by the awful goblins who secretly run the town. Only the goblins are vegetarians, so they first turn their prey into plants before ingesting them. In one of the most memorable scenes, in order to prevent his family from turning into plant-beings, our default hero (a nine-year old boy) jumps up on the table and pees all over their food. He’s a hero! The actors alternately over-act or fail to act entirely, and given that every member of the crew (except the costume designer) spoke only Italian while making this English-language film, it’s almost a miracle that the thing makes any sense at all. Now a cult classic, Troll II is rightly revered for its campy aesthetic. It has even been the subject of a documentary which attempted to get to the bottom of how a film can go so, so wrong. It’s the type of movie you’ll find yourself rewinding again and again because you’ve been laughing so much that you’ve lost track of what is supposed to be happening. Definitely a classic. 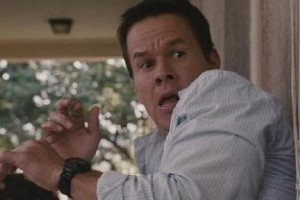 Director M. Night Shyamalan should have stopped when he was ahead. By the time you’re making a horror movie where the characters are being killed off by the trees and at one point are forced to literally run faster than the wind in order to survive, maybe it’s time to step back and re-consider the path you’ve taken. I mean, I’m glad that he didn’t because there is no greater line in all of cinema history than when science teacher Mark Wahlberg urgently needs to formulate a plan to escape certain death. “Be scientific, douchebag!” he scolds himself. Perfect. Add to the mix the ever-awful Zooey Deschanel, a creepy old guy who is obsessed with hot dogs, sporadic and gratuitous violence (a pre-teen gets a shotgun blast to the chest), and an amazing moment when Wahlberg cautiously approaches a potted plant in someone’s den in what I assume sounded much more frightening on the page, and you’ve got something really special on your hands. Never mind what I said before, Shyamalan, keep doing exactly what you’re doing. 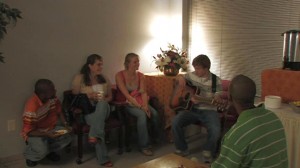 CrossShadow Productions fills a very specific niche, specializing in creating Christian horror films. That’s right, they’ve made a name for creating PG scares that your entire youth group can enjoy together during church lock-ins, and the Pray series has just reached its zenith with a 3-D final chapter. But for my money, the winner will always be their first and worst film, a movie made with almost no budget and which centers on a good Christian girl named Madison who is having a great time living her life, oblivious to the fact that a psycho is on the loose in her hometown. Let me just describe the ending to you because I know you’re not going to watch the movie. Madison is at the mall when she gets chased by the bad guy (they call him “The Shape”). She jumps in her car, but it won’t start. She begins to pray: “Jesus, please start my car!” Miraculously, it works! She gets some ways down the road when it sputters and dies. She coasts into a gas station and gets a mechanic to take a look to see what’s wrong. There’s no way you drove here from the mall, the mechanic scoffs. And why is that? “You don’t have an engine!” Yes, The Shape had removed the engine from her car while she was in the mall, apparently, but Jesus was all the horsepower she needed. Does it get any better than that? 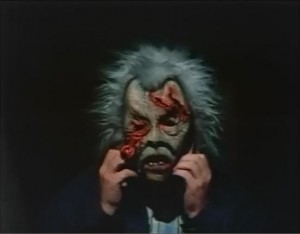 Director Juan Piquer Simon shows up again on this list with what is arguably his masterpiece, Pieces. Telling the story of a young boy who kills his mother and grows up to be a serial killer, the movie has plenty of coeds chopped up and bloody for fans of cheap horror, some nudity, but most of all… totally insane plot points. Take, for example, a moment where tennis pro-turned-secret-agent Mary Riggs is walking through a college campus at night and is suddenly attacked by a dark, shadowy figure. She fights him off, screaming and flailing, and then the male lead Kendall appears to announce that that’s not the killer, “It’s my kung fu professor!” But he may as well be, as every person on the staff is creepy as hell, from the leering custodian to the sneering dean to the ultra-suave biology teacher who keeps a waterbed in his classroom for, uh, you know, science. Featuring an amazing synth score from Cam, Pieces is magnificent. Anybody who doesn’t like it is a [deep breath] BASTARD! 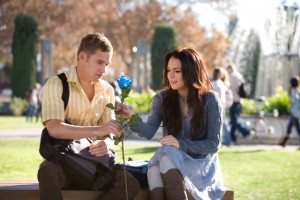 There’s no way to do justice in describing this movie, but let me try. It stars Lindsay Lohan as, alternately, a good teenage girl who likes to write stories in her room and a stripper with a mouth like a sailor. She is found with an arm and a leg missing after being abducted by a crazy serial killer who didn’t quite finish the job. The serial killer’s motive is beyond idiotic, it’s insulting. Then there’s the filmmakers’ attempts at making the movie intelligent by drenching the scene in red or blue depending on which Lohan Lohan is supposed to be at the time. It’s symbolism! Gloriously campy and unabashedly insane, the movie goes so far as to actually have its lead character say its title in a revelatory manner: “[Gasp!] I know who killed me!” It’s so uncomfortable watching Lohan over-compensate in removing herself from her kid-friendly image by chewing the scenery and swearing profusely while waving her arm-stub around. Best thing about the movie, though? When some random boy on a bus sees Lohan’s bandaged arm is bleeding and tells her to hold it higher than her heart. “People get cut,” he says, “That’s life.”

Indeed. Words to live by.