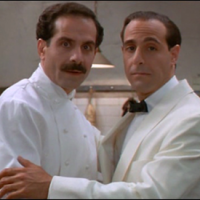 I think there’s only one way to adequately describe Big Night, the delectable 1996 comedy about sibling restaurant proprietors played by Tony Shalhoub and Stanley Tucci, and that is to describe the very final scene. To the spoiler-phobic, now might be a good time to excuse yourselves from this review because I’m about to use – gasp! – a scene from the movie in order to talk about the movie. You’re probably only interested in the star rating anyway, you philistine.

Okay, now that it’s just the two of us, here is the image I would like you to consider. The brothers, Primo (Shalhoub) and Secondo (Tucci), have just completed their titular “Big Night” and it is the next morning. In silence, one cooks breakfast for the other and they sit down to eat together. They’ve had a bit of a falling out after the stress of the night before, but as they eat, Secondo hesitantly reaches over and pats his brother’s shoulders affectionately. Primo, in turn, reaches out and embraces his brother with one arm. The two sit, holding each other with one arm, enjoying their respective meals with their free hands. It’s a beautiful moment of sincere camaraderie between the two, and the movie ends there.

What’s interesting about this finale, and why I think it speaks volumes about the film as a whole, is the fact that we’ve been lured into believing that the movie was about the brothers’ attempts at saving their restaurant. Because Primo is stubborn in his belief that the closest mankind can come to divinity is in eating great food, he refuses to dumb his menu items down for the American palette. The owner of a rival Italian ristorante, Pascal (Ian Holm), wants to help the brothers out; despite the fact that they are technically competing, the two establishments nevertheless share a certain ethnic pride that bonds them together. Pascal explains to Secondo that the average American doesn’t want to wonder what he’s ordering – he wants to sit down and order something easy, like steak. Primo’s resoluteness on this issue has driven the restaurant to financial ruin and they’ve been given until the end of the month to collect enough money to pay off their accumulated debt.

This is a fairly straight-forward plot, and one that has been used with great success many times before. Usually it involves a group of precocious teens winning a dance contest in order to save their civic center from demolition by an evil business magnate, but the concept is roughly the same. In truth, this conceit does drive a lot of the action that leads up to the “Big Night” in question, but then once everything is said and done and the dust has finally settled and the eggs are cooking on the skillet the next morning, we never do find out whether they saved the restaurant. They never go back to the bank, and I think that’s important. There’s even a brilliant joke early in the film relating to this: proud to be serving his recipes no matter the cost, Primo allows a regular customer to eat without paying, accepting instead a large painting of a landscape for the meal. “Throw it on the pile,” Secondo says glumly, suggesting that they’ve been accepting artwork as payment for some time. Obviously this is how the restaurant will be saved, the pair will sell the paintings for a sizable sum and everybody will live happily ever after!

But again, we never find out. This isn’t “The Big Night Where We Made a Bunch of Money and Saved Our Family’s Resaurant”, it’s just Big Night. And so the heart of the film is not in plot devices, but in character development. Primo is not relegated to one character trait (“stubborn”) and forced to react to every new event from that perspective – he’s a well-rounded character: shy around a woman that he likes, suspicious of those who don’t share his passion for cuisine, proud of his Italian heritage and perhaps overly reliant on a brother who is all too willing to take charge. When Secondo leaves the restaurant to pick up alcohol for the party the duo is planning, he gets side-tracked looking at expensive cars. A sleazy salesman named Bob (Campbell Scott – the director!) sidles up to try to pick up an easy sale, but their rapport turns toward their relationships with their siblings, how Bob broke his arm (he’s wearing a cast), and so on. After a test drive, the sale isn’t made but the two have become good friends. Even the sleaziest characters are given humanity, so that they’re not simply stereotypes but instead fully realized characters.

This is wonderful, but also tends to make the movie feel enjoyable yet light. It doesn’t seem as though there’s anything at stake, despite the suggestion that the fate of the restaurant is in jeopardy. Watching the passion that Primo puts into presenting his concoctions is entrancing and the final product looks delicious, but it’s hard to think, “This is the timpano that will make or break the livelihood of these brothers.” Instead, the viewer just relishes the care with which they handle the item, putting their ears to its crust like listening for a baby’s heartbeat through a pregnant woman’s belly. As illustrated previously, I believe strongly that this was entirely purposeful, but it does make for a film that’s hard to think of as anything more than gently pleasing. There’s an attempt as using the tension of Secondo’s hushed affair with a second woman, whose presence at the restaurant during the Big Night creates an uneasy atmosphere, as a substitute for the lessened weight of the A-story. It works to a certain extent, and the explosive confrontation between the brothers when their mismatched priorities come to a head is indeed charming, but these are minor scuffles in an otherwise relaxed environment.

I appreciate that about Big Night, that its concerns are of a much smaller scale than other films of its type might be, but I find it hard to love the film. It covers a brief moment in time, a specific feeling, and does it well – but it’s not so engrossing that one would feel compelled to return to it often. Nonetheless, it is a warm, knowing, character-driven piece that I recommend highly.