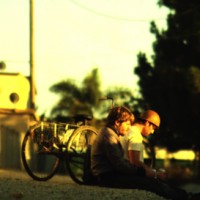 The most direct comparison that I can make for Bellflower, from first-time director Evan Glodell and featuring a cast of similarly first-time actors, is to another much anticipated film from 2011 which left me less than satisfied: Another Earth.

Both movies come with heady concepts which promise a lot of excitement. Another Earth comes packed with a thrilling science fiction concept about a dual planet suddenly appearing in the sky, duplicate copies of every human being on our planet living a separate life from afar. Glodell’s film wows with a flame-spewing muscle car and talk about the end of the world. A Google search for the movie comes up with numerous fiery scenes and a recurring image of Glodell (he also stars!) walking toward the camera with determination, coated in blood. From these synopses, you’d expect both films to be edge-of-your-seat thrill rides, or failing that, gripping psychological profiles of people whose perceptions of themselves have been altered dramatically by outside forces. Unfortunately, both films fail to do their premises justice, turning toward the safety of mumblecore tropes rather than planting their own flags.

We are introduced to best friends Aiden (Tyler Dawson) and Woodrow (Glodell) at the start of the film, guys who have made it a life goal to fashion themselves into the de facto leaders of the apocalypstic wasteland we all just know the world is to become. They prepare by building flame throwers, drawing crude comic book characters, and dreaming of owning a bad-ass car they’ll call Medusa, one whose snarling engine’s revving could be heard from miles around. One night after their daily routine has concluded, the pair go to a bar where fate brings them to a couple of girls who are attracted to them. Woodrow in particular finds himself away from the group with Milly (Jessie Wiseman), she leading him to talk about himself so that their conversation can continue, he being awkwardly shy yet cute in how he tries to be funny. This is the best part of the movie: this first scene when the two are just meeting and cautiously moving toward each other emotionally, a tender image of a new relationship coming to life.

Then the couple spend more time together. What was something sort of wondrous for a night quickly wears on the nerves. They go on an impromptu road trip, each trying to prove to the other how quirky they are. The movie coasts off of the sentimentality that was earned from their initial pairing and fails to re-capture it. No sense of compatibility between the two characters is retained as they trek onward, though the film is desperate in its attempts to sell the viewer on the distance the couple have traveled emotionally in addition to the physical mileage. They drink together, he discussing the childhood dreams he’s held onto well into adulthood, she rarely providing information about herself. They laugh, they lie together in the back of the car, they discuss the status of their relationship. “You don’t want me to be your girlfriend,” Milly tells Woodrow, “I’ll end up hurting you.” This Hot Topic sentiment is painfully puerile as well as pathetically prescient. Indeed, though it’s drawn out by an unnecessarily protracted sequence at a house party – meant, I think, to illustrate the much more hesitant will-they-won’t-they blossoming between Aiden and Milly’s friend Courtney – Milly does eventually hurt our puppy-dog hero, which leads him into the depression that powers the back half of the film.

I use the word “powers” lightly here, as aside from a few strange instances of violent outburst, it’s mostly a picture of the character wallowing is self-pity. Is there a successful movie that could be wrung from the story of a boy who takes a new relationship much more seriously than the girl he’s in it with, then sinks into bitterness as a result of his optimism being unceremoniously crushed? Hell yes there is; these are powerful emotions we’re talking about and if handled correctly, they could make for a powerful cinematic vision. Bellflower shows initial signs of being able to address real emotion in a realistic fashion, but then settles for Glodell being simply non-vocal and letting his beard grow out. I’d like to say that, well, at least the friendship between the two male leads is touching and true, but this isn’t so either. Aiden is endlessly devoted to his friend without any reason for being so, to the point that Woodrow can practically walk all over his pal yet he’ll take it with a smile.

Perhaps the way that the Woodrow of the second half of the film takes advantage of his friend is part of the point, an example of the depths that the character sinks in his self-righteous anger. But if it’s meant as a picture of sincere emotional turmoil manifesting itself in disregard for the feelings of others, it’s done in a clunky, unconvincing manner. And toward what end? What does the movie provide for Woodrow aside from the opportunity to rage, rage against the dying of the light? When he imagines himself in his Medusa, tires squealing, the air filled with the smoke of burned rubber, bursts of fire shooting out of the tailpipes, what purpose is served other than looking cool? Woodrow looks torn up, but his humanity is gone by this point in the film. That’s not a commentary on the character’s mental stability, but instead on the character as written. Quick flashbacks to the point when his relationship with Milly came to a crushing conclusion are used to maintain a bit of weight, but overall the character becomes less a man, more a collection of mannerisms. The ballet of those early scenes is pummeled down with a steady march.

This makes the penultimate scene (which takes place on a beach) feel oddly out of place, a remnant of what might have been in the second half if the plot had stuck to its guns. It goes for spectacle over honesty and loses the only thing it had in its favor. Bellflower starts off with a bang – a series of rewound images to entice the viewer to stay invested in the story – but then it quickly loses its way and no amount of exploded propane tanks or plumes of fire can make up for those emotional/narrative lapses.