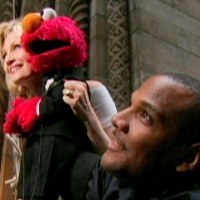 Kevin Clash, the puppeteer whose life is chronicled in the life-affirming documentary Being Elmo, appears to be just as lovable as his signature character. With that in mind, the film does a good job of giving the viewer a presentation of the many chapters in Clash’s life complete with a great wealth of archival footage. It’s a feel-good documentary, if there is such a thing, only briefly touching on struggles that Clash faced in his youth as an up-and-coming performer – much like “Sesame Street”, the documentary is all inviting and cheerfulness. I’m not ashamed to admit that it brought a joyful tear to my eye on at least one occasion. But aside from forcing a smile upon its audience’s face, what purpose does the movie serve? Am I wrong to believe that it needs a deeper motivation?

There’s a brief mention of the ridicule that Clash faced as a child from classmates who teased him for his preoccupation with puppets. Teenaged boys can be merciless in their prejudice – it would seem that this would be a fount for discussion about the struggles that our subject faced in honing his craft as a youth. There’s also hints of class struggle in the repeated acknowledgment that the family did not have enough money to, say, travel to New York to meet an expert in the puppet arts; there’s the racial component, in that Clash was a black puppeteer in a time when that was virtually unheard of; there’s a social aspect, the strain that the child’s hobby put on his family (well into adulthood); finally, there’s the psychological struggle that Clash’s eventual success brought, forcing him into long days and an inordinate amount of time away from his own daughter. Yet the film as a whole ignores almost all of these sources of conflict in its narrative. Though it mentions the awkward eyes Clash received from classmates for his hobby, the movie quickly skips to an image from his high school yearbook that shows our man wearing a dapper suit next to an expensive car with the title: “Most Likely to be a Millionaire”. How does one go from being mocked and likely bullied, to being viewed as potentially the coolest kid in school? The movie doesn’t bother investigating. I suppose it’s possible that this title was given to the young Clash ironically, but if that’s the case it remains unclear due to the film’s stubborn refusal to dig any deeper.

In fact, by the account of Being Elmo, Kevin Clash had a remarkably easy transition from oddball high-schooler to executive producer and star of “Sesame Street”. His mother even notes that he went almost immediately from high school to New York to begin working with Kermit Love – a puppeteer who had worked as a disciple to the man who is the veritable Jesus of the art, Jim Henson. Ergo, Clash’s eventual collaborations with Henson were more inevitability than hard-earned reward. I’m sure that’s unfair to Clash, who spent hours upon hours honing his art so that he could instinctively make a puppet move in a way that closely imitated the movement of a living human being. We see scenes of our man teaching the staff of a French version of “Sesame Street” how to properly hold their characters, advising them to leave the mouths open slightly to suggest a smile or to move the head every few moments so that the character doesn’t appear static, or dead. This is stuff that takes a great deal of dedication to master and it’s clear from the astonished response that Clash receives from other practitioners of the field that his commitment has paid off. But again, the movie side-steps the details of the hard work, preferring instead to focus on the reward and consequently making it appear that little work was put in. The film seems to be approaching Clash’s story from the perspective that he a) was blessed with a natural talent that makes practice unnecessary, and b) happened to be in the right place at the right time. This seems a massive injustice, downplaying the man’s work ethic in favor of a take that portrays him as simply chosen.

There’s a cruel irony in that, as Elmo, Clash spends a great deal of time playing with and delighting the children of strangers, yet has little time to set aside for his own daughter. Once again, the movie touches on this with no intentions of approaching this facet of the puppeteer’s life with a critical eye. We see a candid interview wherein our subject describes a note he received from his daughter asking that he set aside time for the two of them to bond before she leaves for college, a moment he describes as a wake-up call to his misplaced priorities. Cut to father and daughter at her sixteenth birthday party, a montage of celebrities wishing her a happy birthday on a projection screen and implicitly indicating her father’s love. This is as close to addressing the schism in their relationship that the movie gets. Actually, the last person to speak on the video is… who else? Elmo. The words he uses are typical for the furry red monster, but because it is the voice of her father speaking, there are multiple levels of meaning as the character says: “Elmo loves you very, very much.”

Does Clash use Elmo, or his cast of puppets generally, as a crutch for developing human relationships? When his daughter was born, he tells us in voice-over, his ex-wife would scold him constantly for attempting to move the newborn’s arms, legs and lips as though she were one of his projects. Did Clash’s inability to separate his real life from the felt and fur and glue that he brought to life have any effect on the dissolution of this first marriage? Certainly it had some effect, even if it was more about his absence than his actions. Once again, the movie prefers to tiptoe around these questions, which makes me wonder why it bothers to raise them in the first place. Being Elmo is lively and enjoyable, no question, but it’s also oddly gutless in its depiction of Clash’s life, closer in nature to propaganda than biography.