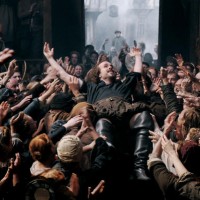 All of the reviews I have read for Anonymous (two total, if you’re looking for a precise figure) spend a great deal of time hemming and hawing over the film’s central conspiracy theory: that the man who wrote all of William Shakespeare’s work was not Bill himself, but rather Edward de Vere, the 17th Earl of Oxford. They describe the theory in great detail, eventually dismissing it as absurd. How often do conspiracy theories catch on with the public? I think that concerning oneself with the historical truth of this film’s allegations is a mistake; unless you’re a die-hard Stratfordian (the name given to those who believe that the author of Shakespeare’s work was Shakespeare himself), the image of the Bard as a drunken buffoon is unlikely to cause you much displeasure. Although it throws “facts” about Shakespeare and De Vere out at the audience, the film’s primary purpose does not seem to be to convince its viewers of a particular viewpoint. Even if it were able to accomplish this feat, it serves no real purpose. Instead, the movie asks you to accept its rules and go with them for the broader dramatic narrative.

In this way, I am reminded of Quentin Tarantino’s Inglourious Basterds, a film which re-purposes history to suit its own ends, allowing Hitler to be murdered by a band of Jewish revenge-soldiers along with most of his regime in a crowded theater. One is not required to accept that this is a documented, true-to-life depiction of the end of the Nazi power in Germany in order to enjoy what the film overall has on offer. In a similar fashion, one’s belief in Shakespeare’s true identity needs not align with one faction or another (hell, most of us have probably never even though to question it) in order for Anonymous to succeed. It’s primary interest is in providing a salacious and complex set of circumstances – complete with tragic heroes and crude mix-ups – to entertain and provoke its viewers. In short, the film seeks to replicate the work of Shakespeare himself. This is a high bar to set, given that the man is generally considered the Citizen Kane of authors, and though the film gets the rough outline down it could never hope to match its source for cleverness and wit.

Also of great intrigue here is that the film was directed and financed by Roland Emmerich, primarily known for large-scale disaster flicks such as 2012, The Day After Tomorrow, and Independence Day. A heady Olde English production primarily driven by dialogue rather than CGI catastrophe seems such a sharp contrast from his typical work. IMDB indicates the Emmerich self-financed the entire movie with his earnings from previous hits and therefore was not inhibited by studio control. I am reminded of John Turturro’s recent Passione, which with its title alone explains why he’s been taking degrading roles in Michael Bay movies for years. Clearly, given the personal investment involved, Anonymous is also a bit of a passion project for Emmerich. But what was it about the script that spoke to him initially, that drove his interest in making the film to the point that he put his own money behind it? Perhaps the opportunity to emulate an idol, perhaps misguided award-baiting. Without searching the internet for an interview where this exact thing is discussed, we may never know.

These are the thoughts that are running through my head as I think back upon Anonymous, but I think what I keep coming back to most of all is how enjoyable the film actually turned out to be. My expectations were low going in, having heard mostly negative things when it was in theaters. As the wheels of the plot begin turning, however, it’s easy to get caught up in the action even as they may sometimes be difficult to follow. Queen Elizabeth I is nearing the end of her life and will soon need to choose an heir, which rumor has it will be James of Scotland – a decision orchestrated by the queen’s advisor Robert Cecil, a hunchback who always wears black and sneers so as to appear evil incarnate. Our hero De Vere is a member of the royal court and has already authored the vast majority of Shakespeare’s plays. He sees the theater as both an avenue for his art (he considers it therapeutic) and as a political tool that he can use to turn the public’s furor toward Cecil, having him deposed. De Vere calls playwright Ben Johnson, little known at the time, to his study in order to provide him with plays to produce. Being a member of the royal court and therefore expected to avoid such frivolity – not to mention with the intent of keeping the political bent secreted from Cecil for as long as possible – our man rifles through manuscripts (“Twelfth Night”? No. “Romeo & Juliet”? No. Ah, “Henry V”, that’s it!) and tells Johnson to produce them in his own name. A series of coincidences later, an illiterate drunkard named Will Shakespeare takes the glory. The political undertones are also slowly emerging and metaphors relating to the affairs of the palace are starting to take shape.

Meanwhile, the film cuts back and forth in time across a span of some 40 years to show De Vere as a teen, seducing the Queen with his brilliance and charm. De Vere is so skilled a poet that he can invent a verse on the concept of truth at the queen’s behest, and simply praising the vivacity of Italian women gets the queen into his bed. The results of their amorous affair will be felt far into the future, as different characters’ knowledge of the tryst has an effect on the way that the plot plays itself out. It’s a labyrinthine exercise indeed, which culminates in a finale which is alternately shocking in its brutality and perversion. Perhaps not as shocking as it might have been had Anonymous been released at the end of the 14th century, but a twist of Fate’s knife nonetheless. And as any tragic hero must, despite his alleged genius, De Vere falls for simple blackmail again and again. His best laid plans are brought to shambles, in spirit-crushing ways.

Which is to say that though the movie fails to match Shakespeare in execution or ingenuity, it remains yet a solid imitation – and as they say, imitation is the sincerest of flattery. Though the characters are difficult at first to keep stock of, the unspoken double-dealing of political maneuvering is a great treat lightened by the character of Will Shakespeare as the comic relief. Anonymous may not be a masterpiece from Emmerich, but the point of a passion project is not necessarily to create something extra-ordinary; rather, it’s to focus your effort on that which most interests you. While I don’t understand Emmerich’s desire to create this film, and while I don’t believe it’s the best it could have been, it’s a successful work precisely because getting it made in the first place was the measure of success.