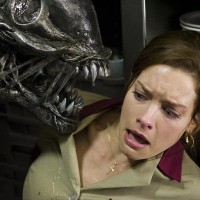 My wife and I have been going through every Alien and every Predator movie in response to the challenge put to us by Prometheus, and what I’ve learned from all of this is that I really like the Alien series. Predator, eh, I can take it or leave it. I had prepared myself for a colossal mess when it came time to embark on the two “versus” movies, so I was pleasantly surprised when I actually found myself enjoying the first of the pair. Knowing that this was to be the last Alien movie I see (at least until Hollywood realizes what it needs to do), and having had my expectations up-ended by the previous installment, I actually went into Requiem with greater hopes.

Ah, but it doesn’t take long to realize that Aliens vs. Predator: Requiem is a film which underestimates its audience at every turn, trading in the complex social structure of the Predator civilization and the intelligent brutality of the aliens for mere monster movie mayhem. Yes, we get to see the Predator homeland for the first time here, and that is certainly exciting – I could throw out a long list of questions that this short glimpse raises in my mind – but it’s only in service of a one-note character, invented to be “cool” rather than sensible. The character in question is a Predator who travels to Earth (in a couple of hours, it seems) in order to clean up the mess left when the group of Predators from the previous film accidentally unleash a pack of aliens on a sleepy American town.

Almost immediately, the movie makes it clear that it thinks you are an idiot. A hunter is out in the woods with his young son when he sees the Predator ship crash and is soon afterward attacked by a face-hugger alien. In the struggle to free himself, a bit of the alien’s acidic blood drops on the man’s arm, easily burning through the flesh and severing the appendage. Cut to one of the movie’s primary characters, a police officer, as he investigates something creepy in a sewer tunnel. Could it be an alien preparing to jump out at him? No, it isn’t, and it never is despite how desperately the movie tries to sell its repeated false-alarm scenes. In fact, the creature in the sewer is but a gentle homeless man who has been asked in the past not to take residence there. The homeless man calls to his dog, the canine loping out of the darkness with an object in his mouth. What could it be, other than the severed arm of the hunter from before. But wait– how did–? Wasn’t the arm in the middle of the forest before? This is a movie that doesn’t just ask you to suspend your disbelief, it asks you to suspend your concept of chronology, spatial relationships and reason. Later in the movie, a group of teenagers breaks into their high school at night to go skinny-dipping in the pool, but get attacked by an alien. The Predator appears out of nowhere to save the day, though moments before he had been shown across town battling a different alien in a power-plant. There’s no use trying to understand how the character moved so quickly – it’s a simple matter of the filmmakers moving the players wherever the scene needs them to be, regardless of whether or not it is in any way comprehensible.

Much like its immediate predecessor, Requiem doesn’t know how to handle its human characters. When they aren’t behaving in broad, stereotypical ways, they simply lack charisma altogether. There is no “lead” here, no characters that we grow to like or empathize with, no entry point for identification with the humans whatsoever. Who lives and who dies is inconsequential, to the point that an entire town can be wiped off the face of the earth and it almost doesn’t matter at all. On a more positive note, this inability to develop human characters contributes to one of the funniest, most awkward lines of the film: “We’re not going to make it out of town without weapons, dickhead. You’re too stupid to talk, Dale, shut up.” If you suspect this line was spoken by a thirteen-year old, surprise! It’s spoken, with utmost seriousness, by an adult.

Of course, the movie doesn’t have any better idea of how to handle its alien characters either. When the two extraterrestrial races face off against one another, the action is almost always edited badly so that it’s difficult to make out what is going on, and the lighting is always dark – an effort made to obscure the CGI, I suspect, but which also obscures the action altogether. An interesting idea from the last film, a Predator-Alien hybrid (dubbed “Predalien” by the internet), is wasted entirely here. Rather than play up this creature’s attributes and set up a thrilling, climactic battle between the Predalien and the Predator, instead the movie is content to relax with generic battle sequences which do nothing to draw attention to this unique creature. Sure, there’s a moment where the real Predator is temporarily stunned and removes his mask (as the Predator is contractually obligated to do at least once in every Predator film), but it’s done with a heavy sense of obligation. When a character yells at another “Get to the chopper!”, it’s less a clever reference to Arnold Schwarzenegger’s famous line and more a lazy rip-off.

I ended my Alien vs. Predator review by submitting that though many think of Resurrection as the official ending to the Alien series, director Paul W.S. Anderson actually helmed a relatively respectful follow-up that deserves to be considered part of the canon. I cannot say the same for Requiem. Even though it tries to salvage some honor by tossing in a “for fans only” reference to the original films before the credits, it’s difficult to take seriously. The movie as a whole is difficult to take seriously. It doesn’t respect its human characters, it doesn’t respect the character of its aliens, and ultimately does what I was afraid the first “versus” film would: it treats the creatures as if they are just special effects and nothing more. Because of this mindset, Requiem is easily the worst of both creatures’ respective franchises.