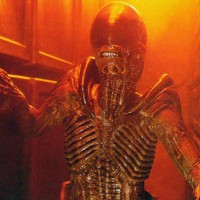 I’ve been working my way through the Alien series recently and have had some trouble finding the third installment, Alien³. In the interim, I’ve been hearing talk that the movie is awful. The IMDb trivia for the film seems to corroborate this theory: it talks of director David Fincher’s disowning of the film, of the revolving door of directors until Fincher was finally settled on, the endless re-writes of the script, the budget-busting set design and special effects, and more than anything the uneasiness with which the film was ultimately released. With so much wavering going on behind the scenes, it’s almost a feat that the film is complete and generally coherent.

This time around, the hyper-sleeping Ripley (Sigourney Weaver) crash lands onto the planet Fiorina 161, a planet inhabited only by 25 prisoners and their guards. The planet was a maximum security prison, but was shut down long ago for budgetary reasons. The prisoners, having found solace in an off-shoot of Christianity, elect to remain in the rusting metal building as a way of removing themselves from the temptation of the flesh. With Ripley’s arrival, the alien necessarily arrives as well, and it won’t be long before all hell breaks loose. Well, actually, yes it will. A great majority of the film concerns Ripley’s growing acceptance within this group of roughnecks (who, honestly, rarely resemble the ruthless murderers and rapists they claim to be). Ever the confident type, Ripley nonchalantly sits with the prisoners despite one man’s confession of the extent of his crimes. Without batting an eye, our gal reponds: “I must make you nervous then.”

Tonally, the film slides neatly between the extremes of Ridley Scott and James Cameron’s films, maintaining an action edge while reducing the speed enormously. The atmosphere is built through huge, featureless corridors where the characters’ voices echo off the walls. They seem to be locked in an endless maze of metal walkways, a fact which adds to the likely intentional claustrophobic feel, but hurts when the chase sequences begin later as it is impossible to get a handle on where any character is at any moment in time. Pete Postlethwaite (The Usual Suspects, Romeo + Juliet), one of my favorite character actors, appears in this film as one of the prisoners but because of the movie’s confusing handling of spatial relationships, I was unsure whether his character had been killed off until he suddenly re-appeared as part of a gathering late in the movie.

I do appreciate the slow build-up to the alien action, and there are plenty of scares scattered throughout the runtime to sate the fans who came in wanting to see one thing only. But what makes the Alien franchise such a success overall is not simply the creature itself, but the strong lead we have in Ripley. Where she was reactionary in the original film and maternal in the second, here she’s allowed for the first time to walk in her own shoes, so to speak. She has lived this nightmare before, and this time around she has nothing to lose. All of her choices are her own to make. While Alien³ doesn’t possess the dramatic tool that Aliens possessed in the stakes-raising inclusion of an innocent child, it makes up for it in Ripley’s bravado. By now, she’s really coming to feel comfortable in her role as the hero.

But I do have to admit that there are a lot of weaknesses to Alien³, not the least of which is the decision to use CGI to animate the title creature in several scenes. I can’t put myself in the place of the viewer circa 1992 to speak on the quality of the effects at that time, but presently it appears a crude paste job, the alien clearly not a part of the image at all. Additionally, though the creature is much more lithe and agile here (it has taken on attributes of its host, a Rottweiler), it seems all but unable to catch up to any of its human prey when they engage it in a foot chase. Perhaps I’m being overly critical, but when the camera switches to the alien’s perspective and we can see it running just a bit too slowly to attack, it has the tendency of taking this viewer out of the action because I am reminded of the artifice. In reality, the alien would devour everybody in the facility with little difficulty, but the movie wants these guys to stay alive a little while longer so it artificially slows the monster to allow for the result it wants to achieve. Then there is the matter of how the alien got on board the ship and why Ripley was spared, both of which are answered with a defiant “just because”, an unsatisfying answer for a major plot point. This is to say nothing of the peculiarly pivotal role of Bishop (the ‘synthetic human’ from Aliens), the significance of which I still can’t work out.

If these complaints can be ignored, the viewer might find that Fincher’s film finds strength in striking a smart balance between action and exposition. The movie isn’t afraid to attack its primary characters while they are in the midst of conversation, and of course the alien (when composed of costuming or puppetry) is as hideous and awesome as ever. Ripley’s self-assurance, as opposed to frightened survival instinct or reluctant maternal duty, is a fantastic new turn for the character that keeps the movie interesting even as she has extended conversations about the history of the prison or conducts an uneventful off-screen autopsy. When the action does arrive, it’s bold and exciting. The ultimate battle, which tests the limits of the endurance of both combatants (Ripley and her extraterrestrial opponent), is particularly entertaining; it follows the rules of the horror genre, but reacts to the results with the crowing joy of a war being won.

Yes, Alien³ is the least of the series (so far), its error especially egregious in its inability to adequately explain many looming questions and in its awkward handling of a large cast of characters. But it keeps the atmosphere of the series alive without devolving into parody or cheap reiteration. It would have been great to have some of those larger creases ironed out, but even with a few wrinkles the film still manages to keep its composure.

One Response to “Alien3”