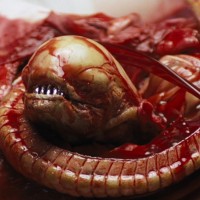 While everyone else in the film community is falling over the recently released Prometheus, we here at Glasgow to the Movies have gone back to basics with director Ridley Scott’s 1979 horror masterpiece Alien. I originally saw the movie when I was much younger, after reading the novelization, and subsequently watched all of the films in the series up to that point. Needless to say, I can barely remember them now. Within the last year or so, I attempted to view the film for a second time and found myself bothered by the extremely slow pace, since then believing that my earlier fascination with the franchise was impossible to revive as a result of this new-found annoyance. This third viewing convinced me that the slow pace is an essential and brilliant element in a carefully constructed science fiction classic; I’m eager to devour each installment once again.

The film opens with the crew of the good ship Nostromo – a starship which had traveled to the far reaches of space mining for ore and is now on its return trip to Earth – each waking ever-so-slowly from the artificial coma they’d been placed in. This is apparently the best way to travel through the vast expanse of emptiness that is the cosmos, and each crew member groggily raises themselves up, cautiously blinking as they re-accustom themselves to the light. This is very realistic, even if each crew member’s casual cigarette smoking has a bit of a distancing effect. As it turns out, they’ve been awakened by the ship in order to investigate the possibility of intelligent life on a nearby planetoid. If they refuse to perform this duty, they could be denied the paycheck for which they’ve abandoned their friends, family, and everything they’ve ever known (damn you, time dilation!).

And so, in tiny increments, the ship is brought down on the planet and some of the crew members head out to explore, finding an enormous horseshoe-shaped spaceship which appears to have crash-landed on the surface. The origin of the vehicle isn’t given much thought, though, as it does not take long for an alien being to latch itself onto the face of Kane (John Hurt). They return to their own ship and try to decide how to deal with this predicament. I suppose the vehicle’s origins are intended to remain mysterious: is the being found inside part of the race that created it, or has it simply taken up residence inside in the time since the crash occurred? However, it would have been nice to have a definitive answer of whether the titular “alien” is little more than the monster it appears or if it has intelligence on par with its human counterparts.

In any case, it’s all leading up to the infamous “chestburster” scene, probably the most iconic moment in the film and one that unfortunately does not carry the same weight it may have at one time. That the alien is produced by puppetry is too obvious, leaving the moment feeling a bit more silly than frightening. But it’s a mistake to measure the movie by its ability to produce big, gross alien action to throw at the audience. In the time leading up to the chestburster, the crew prods at the alien on Kane’s face in scientific curiosity and trepidation. A small cut on one of the being’s tentacles causes it to excrete acid that eats through many layers of the ship’s metalwork. It’s interesting to note that the movie doesn’t have the creature writhe in pain, flinging acid around the room and melting people’s faces, instead allowing a small drip to serve as a signifier of the horror these people are dealing with merely by implication. Later in the film, once the creature has reached its maximum size, one character attempts to outrun the alien while another group monitors the chase on a radar screen. The monster isn’t shown during this time, represented instead by a beeping, bright white dot on the machine. Clearly, Scott had learned the lessons that Spielberg had taught four years earlier.

As a result of the slow-building tension of the early scenes, the release of the monster within the humans’ ship accrues a greater sense of urgency and danger. It feels real, more so than if the film jumped immediately to a gun-blastin’ showdown with the creature as it picks off the humans one by one. What I mean is that, in the calculated way that the crew sizes up the creature in those early scenes and have serious discussions about how they should handle the find, we get a sense of their uncertain anxiety. Now compare this to another extraterrestrial entertainment like, say, 2011’s Cowboys & Aliens – a movie which arrives with explosions and gunfire, the characters’ motivations reduced to one-sentence cliches. “I want to get my wife back.” There’s something at stake here – namely, the characters’ lives – and it comes across as far more important that these characters survive than it might in other films because they act like humans. They have a meal together, talking with one another and laughing, griping about their salaries, proposing theories about how best to handle the foreign creature on board. The characters have their own personalities, not just descriptors.

And of course, the alien itself is bad-ass. The penultimate showdown (yes, I used the right word there) is framed in darkness, a strobing light illuminating the crevices of the ship while the tough as nails Ripley (Sigourney Weaver) moves hesitantly around every corner. The creature lunges into the shot suddenly, all dark slimy skin and jagged teeth, a totally singular creation with suggests a humanoid base but grows into a terrifying, possibly reptilian demon from there. It’s understandable why many would remember these big action scenes as opposed to the moody build-up which actually does the majority of the heavy lifting: these big scenes make a statement. They jump down hard on the fragile line between the potential danger that the alien poses and the very real violence being unleashed.

I’ll probably remember those in-your-face moments with the most clarity too, but none of those would work if it not for the measured steps taking us there, and (I can’t believe I forgot to mention this until now) the extraordinary score by Jerry Goldsmith which never overpowers a scene, subtly foreshadowing the terror soon to be unleashed. Chilling and epic, Alien is a splendid horror flick that rises above its cheap science fiction premise by knowing how and when to play its cards.

One Response to “Alien”