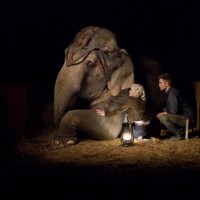 Like a version of The Notebook that isn’t the worst thing known to man, the 2011 schmaltz-soaked Water for Elephants tells the story of a boy named Jacob (Robert Pattinson), a girl named Marlena (Reese Witherspoon), and the general vicinity which brought them together. It’s a soft-focus, sepia-toned mumbling romance that limps along to a confusing and unrewarding finish even in the face of a plot which might have been a source of tension or drama, as it involves a lot of murder. But the killings all take place off-screen, largely to batches of characters who bear no importance to the viewer by virtue of being unrecognizable names. And so even though the bad guy is played by Christoph Waltz (Inglourious Basterds) in much the same manner he played his previous role, the alleged violence is curiously unconvincing. We feel more empathy for a stupid elephant than for the dozens of human beings ritualistically slaughtered by the sadistic ringleader of the Benzini Brothers circus.

But I’m getting way ahead of myself here. Jacob was raised by parents who believed that only an idiot could not be successful in America, a sentiment that seems heartless given that the film takes place during the Great Depression, and hits particularly close to home given the very public protests of the 99 percenters taking place currently. In any case, a twist of fate causes Jacob to drop out of veterinary school and hop a ride on a circus train with hopes of finding a new life. This is where he sees Marlena – and much like his inspiration Noah Calhoun, he is instantly entranced by the woman and seeks to win her favor by shooting her horse in the head. Trust me, that’s no joke. The only problem with Jacob’s attraction is that Marlena happens to be the wife of August (Waltz), the circus ringleader and the meanest bloke you ever met. In truth, his character is rather inconsistent. At times, August seems carefree and friendly, at other times savage and despicable. I suppose his changing demeanor is part of what keeps people on edge around the man, but often his radical shifts in mood feel entirely bizarre. For instance, there’s a moment early on where he’s just about to have Jacob tossed out of the train for disobeying him, but seconds later is laughing and congratulating the boy for his service.

Because it’s the Great Depression, there is a need for an attraction which can pack in the audience and outdo those damn Ringling Brothers and their sexless circus. This is how Rosie enters the picture, an aging pachyderm who refuses to answer to commands from August and is therefore prodded with a metal spear on multiple occasions. The elephant becomes as much a character in the film as any of the actors, a choice which surprised me somewhat given the fact that her involvement does not further the romantic storyline, but I suppose no movie is complete without a host of subplots. Jacob and Marlena bond over their mutual love of animals and share a running joke where one says something that seems overtly romantic, the other hesitantly responds, and the first is all like, “No no no, it’s the name of a song!” Because Marlena is married to August, though, their love must remain a secret. August makes it easy by being a total jackass, though, which in turn makes it easy for us to root for Jacob to hook up with the girl. Marlena, for her part, tries to brush away her feelings for August by indicating that she was young and foolish at the time that they were married, but there had to be some level of attraction there at some point. She speaks with awe at the way that he taught her the art of bareback horse-riding and it’s clear that she once loved her husband. The cracked relationship isn’t given any thought, unfortunately, because it’s much easier to call August a villain and leave it at that. Hooray for infidelity!

Because it is difficult to house and feed hundreds of people when your circus is making very little money and a huge investment has been made in an aging elephant, it becomes necessary for every entrepreneur to weigh the pros and cons of throwing people onto the rocks at night, killing them instantly but easing your own financial burden. This is a decision that August makes nightly, eventually to the point that whispered rumors tell the tale of large groups of men going missing all at once. I guess it’s the Depression which causes those still living to stick around. Jacob makes an off-handed remark about seeing men who are hungry (i.e. starving) for the first time in his life while traveling with the circus, so perhaps the pro of a steady job is enough to outweigh the con of maybe being murdered in your sleep for the circus folk. I can’t understand why Jacob stands by August, though, having dinner with him and laughing at his jokes like the two are best friends. Is it all a ruse, for the sake of being closer to Marlena? Whether it is or it isn’t, his shrugging response to the death all around him makes the boy seem less of a hero than the movie would have us believe.

But if he and Marlena wind up together, it will all be justified, right? It will make his cantankerous return to the circus eighty years later to tell the story of his love to Paul Schneider really sweet, right? The story he tells as an old man is set up with a description of the worst circus tragedy in recorded history, but the actual revelation of what happened feels like an afterthought. There’s nothing leading to the finale, and it’s unclear what sets the actions in motion. When the story is over and the action returns to present day, the reasons that old Jacob is there in the first place are themselves muddled. About the only clear thing is Jacob and Marlena had an epic, obligatory love for one another. Oh, and it was cool to hang around with an elephant.

With a better sense of the reality of the situation – not just telling us that people are dying, or that people are starving, but instead showing us the things – it’s possible that Water for Elephants could have come out a lot weightier than it is. As it stands, the movie is agreeable and simple, but ultimately the plot is too watered down to be affecting.