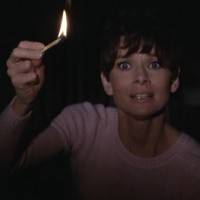 After having been impressed by Audrey Hepburn in the similarly adapted-from-the-stage drama The Children’s Hour, I considered going on a Hepburn kick, but instead of going straight out for Breakfast, I decided to stop off at Wait Until Dark, intrigued by the synopsis: Hepburn plays a blind woman who is terrorized by Alan Alda and Richard Crenna (Rambo) when they break into her apartment in hopes of finding a doll that has been stuffed with heroin. Their plans are complicated by the fact that the blind woman, Susy Hendrix, is the world champion blind lady and quickly realizes that there’s something odd afoot.

Being taken from the stage, it shouldn’t be surprising that the vast majority of the film takes place inside the Hendrix’s apartment, save for a few scenes shot from outside. The lack of movement never feels stifling, however, because although the film is set primarily in the living-room of the apartment, there’s a lot of action going on. Roat (Alda), Mike Talman (Crenna), and Carlino (Jack Weston, Short Circuit 2) come up with an elaborate ruse to get to the doll without raising any eyebrows. The plan involves Talman acting as an old army buddy of Susy’s husband, the implication that Mr. Hendrix may be involved in an affair and/or murder, a false police investigation, and a fair amount of disguises. Which seems like an awful lot of trouble to go to in order to fool a blind woman, but there you have it. The real excitement of the movie comes in the final moments, which I’ll only ruin as much as the advertising campaign for the film apparently did: some of it takes place in complete darkness, the better to put you on the edge of your seat. Before that, though, the intensity builds as Susy slowly begins to unravel the plot that the men have been cooking, by simply adding up small clues until it forms a larger picture.

There are moments, then, when the movie is strikingly effective. The climax, as noted, is pretty great and gave rise to one of the cliches of modern horror filmmaking, if the movie’s IMDb Trivia page is to be believed. It’s a gimmick, certainly, but there’s much less shame in being gimmicky for a horror film, do you not agree? I mean, I’m much more willing to accept “he was a ghost all along” from The Sixth Sense (sorry, spoiler!) than I would be if Taxi Driver tried to pull that (that’s not the end, is it? I’ve never seen the entire thing). It’s not really until we get closer to the finale that Wait Until Dark becomes a straight up horror movie, though, biding its time as a thriller first. A lot of the early scenes with Alda, playing a beatnik sadist with a massive ego, are engrossing. The character proves early on that he’s not always well-equipped to deal with a given situation, but he makes up for it in commitment to the cause. He’s unsettling to begin, a card with tricks up his sleeve that he’ll never real. It’s not until later that he begins switching over to full-on insanity.

In some ways, the film began to remind me of the likes of The Last House on the Left, although with much fewer instance of brutal rape and graphic violence. Those sorts of movies, though sometimes wrenching to witness and often good for a brief discussion of the moral standards to which film must hold itself, are not usually the kind that lend themselves to repeat viewing.  Invariably, a girl or two is set loose in the woods, chased down and terrorized by a group of men until the inevitable reversal of fate and the movie ends. Wait Until Dark is very similar, save for a spacious apartment standing in for the woods and the chase being (for the most part) far less physical than psychological. The fact that the games played by these three men, including threatening phone calls and petty thievery and other general mayhem, are being used in order to break her defenses in a different way than most of the cinema that would follow – i.e. they want in her mind, not her pants – lends a bit of a serious air to the proceeding, making the slow reveal for Susy a more rewarding experience for the audience than if the guys had simply burst in, tied her up, and torn the place apart.

But really, that can only get ya so far. I tend to think of the stage as a place where the action is delivered primarily through the spoken word; when I know that a movie was based on a stage play, I automatically infer that the movie is likely to have a lot of talking, a lot of emotional momentum, explosive interactions, the works. The bulk of Wait Until Dark centers on Susy and Talman as they spar, him trying to prevent her from catching onto his plan, but their interactions are unsatisfying. Crenna looks like a leading man, but leaves no mark on the screen, and Hepburn truthfully has little to work with. The intensity of her fear and suspicion, or his scrambling to keep a step ahead of her, it never comes across. There’s also a secondary character who shows some initial promise yet fades fast, and a huge misdirect which is off-putting even though I can appreciate the concept.

So Wait Until Dark is a passable film with some extraordinary moments, though they be few and less a natural progression of the plot than the chiming of the bells at the top of the hour. It hits the beats and goes where it should, but with only a minimum of panache. Then again, maybe I would have liked the movie more if I had put off watching it for a little while. You know, if I had just waited until, oh god, what’s the word I’m looking for?