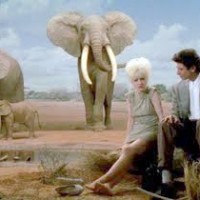 It would be tempting to call Vibes “so bad it’s good”, or even just “so bad”. There was one amateur critic on Facebook who referred to it as “the worst movie ever made”, which is quite a stretch. Cobbled together from bits and pieces of other movies, most notably Romancing the Stone and Raiders of the Lost Ark, it’s mostly a hit-or-miss mish-mash of so-so one-liners and tepid action sequences. It isn’t repellent, but neither is it attractive. I can imagine owning it… on VHS. I can imagine watching it occasionally… when there’s nothing else to watch. It seems somewhat unfair, but I can understand why it’s all but forgotten today.

Here is all I needed to be sold on the movie: it stars Jeff Goldblum and Cyndi Lauper as psychics who are hired by Peter Falk to find a lost city of gold in South America by using their psychic powers. Doesn’t that sound like a fake pitch for a movie, like maybe the kind of movie-in-a-movie thing you’d see in a comedy? Apparently it’s real. The movie is very serious about their psychic abilities, too, so much that not a single person ever questions their abilities. Goldblum talks about being called into the principal’s office at age seven in order to determine who threw a rock through a classroom window. His power is that he can see the entire history of any object he touches, but like Roger Rabbit this power only comes through when it’s convenient. Lauper talks to an invisible spirit named Louise (hey, Vibes passes the Bechdel test!) who feeds the pop star information about the future. She can also channel the deceased and is skilled in astral projection (wherein the spirit leaves the body and floats around looking down on the world like it’s a Gaspar Noe film). So, there you go. Now think of ways to make that funny. Goldblum rest his head on a table and immediately shoots up: “Somebody had sex on this table.” Or Steve Buscemi begs Cyndi Lauper to tell him which horse is going to win at the races, trying to speak sweetly to the invisible Louise.

The movie is ostensibly about the trip to the lost city of gold, but the city itself is both a MacGuffin and a bizarre plot twist. Mostly the point of the movie is the road trip fun that the three amigos have as they try to avoid being killed by their competitor, a German psychic (because you should never go without a funny accent) named Ingo. Peter Falk wise-cracks his way through the film, not so much an important character but one who has to stick around to keep the plot moving forward. He has a few good ones. When a man says that he is sorry because he slept with both of Falk’s wives, our man responds, “Well, you got one up on me.” To quote James Plath’s review of the film at DVDTown.com, “Barump-bump!”

Meanwhile, Goldblum and Lauper are cautiously falling in love with one another. Their relationship, which is inevitable from the beginning, actually feels more organic than one might imagine. As federal law dictates, there is a brief tussle which breaks the couple apart momentarily in an awkward fashion, but aside from that their relationship grows beautifully. I think part of the reason for that is that it doesn’t seem like a relationship. They kiss as a ploy to throw Ingo off of the reason that they are in South America (it’s a long story), and the kiss obviously means something to both of them, but it doesn’t automatically make them a couple. So through the majority of the film, the two are simply very good friends who enjoy being with one another despite being soooooooo different from one another (he works in a museum, she.. doesn’t work at all?). They insult one another playfully, they help each other out when the ambassador from Spain is trying to murder one of them with an expensive necklace (just go with it), etc.

In addition to a relationship which is not overly forced, there’s the psychic powers, which are – let’s face it – kind of cool. Goldblum is fun to watch in his own right, but when he takes off a woman’s underwear and then throws them away in disgust (rated PG, folks!), or shudders after touching a knife that was used in a murder, it’s awesome. There are no special effects required, just the ability to get into the movie enough to kind of believe what’s going on. The same holds true for Lauper, whose spirit helper is invisible. And yet when she tells other characters things about themselves that NO ONE ELSE COULD KNOW, it’s kind of exciting even though obviously it’s all a part of the script anyway. In fact, when the movie cranks up its special effects budget are among the least interesting portions of the film. The only reason that they remain engaging is because of those things mentioned previously: Goldblum’s charisma, and the mostly sweet chemistry between he and Lauper.

If I had seen Vibes when I was growing up, or if I had seen it a little less sober than I was, I can imagine liking it a lot more. There’s nothing really bad about it. It’s just extremely derivative with very cheesy humor. It’s not exactly an awful movie, except that Cyndi Lauper is hard to take seriously a lot of the time because of the way she looks (oh god, the hair!); and it’s not exactly a good movie either because it refuses to do anything original or surprising, with the exception maybe of the aforementioned Gaspar Noe shot and the fact that the movie is about psychics. Ya don’t see that every day. For the most part, though, the movie is so agreeable and bland that it’s easy to forget despite the fact that the casting alone has all the making for a cult classic. Yes, Vibes has been forgotten because it’s “I dunno, okay I guess”, and that’s not enough.

One Response to “Vibes”