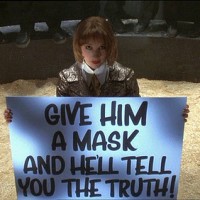 It’s probably unfair to make this comparison, but the film that comes immediately to mind when I think of director Todd Haynes’ Velvet Goldmine is one that I watched for the Letter Game just two weeks ago: Tru Loved. That film suffered from an overbearing preachiness that the filmmakers apparently did not recognize. Haynes’ film makes similar mistakes. It’s so sure that it has something important to say that it forgets to get around to saying it. The characters talk in florid, grandiose ways – IMDb Trivia informs me that much of the dialogue is ripped straight from the writing of Oscar Wilde – yet by the film’s end, it’s difficult to tell what, if anything, the point was.

The movie is about a journalist named Arthur Stuart (Christian Bale). Or, no, it’s about a pair of glam rock stars from the early ’70s – Brian Slade (Jonathan Rhys-Meyers) and Curt Wild (Ewan McGregor). It’s about Stuart, in the dreary yuppie-filled days of 1984, being assigned a project: a “where are they now” piece for the bright star Slade who faded into obscurity following an assassination attempt which was quickly revealed to be a hoax. What purpose the faked death served is never fully explained, although that’s not unusual for this film. After all, the movie starts with an infant Oscar Wilde being left on the doorstep of a nice family by aliens, cuts to the poet as a child telling his school teacher “I want to be a pop idol”, then promptly forgets about this prologue altogether. There is a thin subplot about a jade earring being transferred from one glam god to the next, though it’s not given enough focus to have any real weight.

In any case, Stuart sets about finding people who might have known the enigmatic Slade when he was rising to fame, and I’m a little embarrassed by how long it took me to recognize this as a Citizen Kane homage. Once again, I’m not certain of the reason for this connection, unless it’s meant to set the rock star up as equaling the tortured genius of Orson Welles’ most famous character – a standard that Slade falls far short of. Friends and acquaintances speak of Slade as a visionary, destined to change the face of rock and roll and setting out to start a sexual revolution by openly admitting to his bisexuality. But the musician doesn’t come across as anything more than a provocateur. He quickly trades in his acoustic guitar and flowing gowns for layers of make-up and Lady Gaga’s wardrobe after seeing the hyperactive performance of fellow glam rock pioneer Curt Wild.

And then he becomes famous. Is the story about the price of fame? No, because Slade seems to enjoy a never-ending supply of cocaine and orgies, declaring emphatically to his wife that he’s never wanted anything more. Is it about accepting yourself for who you are, as evidenced by Stuart’s memories of repressing his homosexuality in front of his parents? There’s a great moment where Stuart imagines pointing to Slade on his television set while screaming at his parents, “That’s me!” But there’s no follow-through here, either; the Stuart of the 1970’s has many chance encounters with the two glam rock idols, but he doesn’t seem to reach any great conclusions about himself as a person or even about Slade and Wild as people.

There’s no follow-through, that’s a good term to use. The movie sets up so many different ideas and does nothing with them. Slade and Wild team up to release a duets album a la Watch the Throne, then they have a sudden falling out which is not explained at all. I wrote in my notepad: “Is Wild too wild?” That’s the only explanation I could come up with to explain the bizarre series of events, and I didn’t even bother trying to explicate why Slade’s wife Mandy married him in the first place (she was lost in some kind of music video daydream), or why Slade’s original producer lost control of his act because he refused to arm wrestle Eddie Izzard, Slade watching the exchange with a disappointed scowl. I’ve got to admit, I was disappointed too: we were so close to having a glam rock version of Over the Top.

Let me describe one particular scene from the film. Arthur Stuart, in present day (1984), finds the long-forgotten Mandy drinking alone at a bar and sits with her in order to hear her tale of life with her ex-husband. She says she doesn’t have the information that Stuart is looking for, but he claims she does because of the way that she smiles. “Smiles lie,” Mandy says. To which Stuart responds: “Exactly.” What? What does that even mean? It’s in this smug nonsense that I found myself especially unimpressed by Velvet Goldmine. The film isn’t about art, or about sexuality, or about losing oneself to external influence, or even about actual human relationships. Instead, it’s primarily about nothing at all. I don’t mean that it ponders the limitless expanse, but instead that it’s tarted up with make-up and glitter, but it has nothing at its center.

Perhaps this is best summarized in a line spoken by Mandy, taken from the poet: “Beauty reveals everything because it expresses nothing.” The movie thinks of itself as a work of art (hence the shameless play on Kane), it thinks of itself as beautiful and revelatory, yet it expresses nothing. In his review, Roger Ebert notes that it’s “a little disconcerting that the last 20 minutes, if not more, consist of a series of scenes that all feel as if they could be the last scene in the movie.” It feels that way because there is no goal in mind. It’s about Slade, Wild, and Stuart only insomuch as they are the ones on the screen. Their exploits are vapid, as falsely sensational as a poorly-rendered spacecraft shooting sparks across the sky.

It may be called Velvet Goldmine, but there are no riches here.

One Response to “Velvet Goldmine”