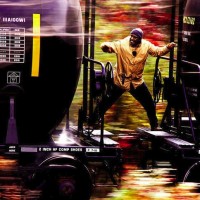 When I first saw the Tony Scott directed, Denzel Washington led Deja Vu, I was really into it for a little while. It was a silly action film with absurd twists in logic, sure, but I still thought that there were some intriguing ideas underneath – a chase scene that takes place through time, in particular, caught my attention. Similarly, I thought that there may be something intriguing to find in the pair’s 42nd offering (almost tied with Burton/Depp now!), Unstoppable. Well, that’s not really true. To be honest, I happened to see a trailer on television and thought the movie looked ridiculous and amazing in all the right ways: a runaway train, zooming through cities at top speed, plowing easily through horses and a school bus full of children, complete with our heroes jumping across train cars – and don’t forget the explosion. I anticipated something terrible, but awesome nonetheless.

The movie gets the first part, but skimps on the second. To begin the discussion of what makes the movie terrible, it would seem irresponsible not to mention the hand behind the horror, Mr. Tony Scott. A train has one path to follow – the train tracks – and so it would seem that a steady shot would be more than capable of capturing the idea at the center of Unstoppable, i.e. a train that is moving. Scott’s camera swoops around and zooms in and out and the image cuts a dozen times per minute, all to form a huge, jumbled mess. The obvious comparison is Michael Bay’s unfocused vision in the Transformers series, but that movie at least had robots who could move in pretty much any direction conceivable, and which had different angular components which could move independently. The monster at the center of Unstoppable is a locomotive, an object which, for the most part, exists as one uniform object that, again, has no trajectory other than straight ahead. I get the idea behind the breakneck swish-pans and cut-cut-cut-cut-cuts, of course: it’s to make the action seem more intense. It’s not enough that this train is heading toward a heavily populated city with a cargo of highly dangerous chemicals inside, no. We’ve got add urgency!

I liked the way that the main characters, all veterans in the locomotive field, speak in industry jargon. Beyond that, though, there’s little to enjoy. The characters are prone to making jokes, many of which fail to hit or else seem out of place given the gravity of the situation. Our two heroes, Denzel Washington and Chris Pine, set out to stop the runaway train themselves, but are told that they must abandon their plan. When the VP of train operations asks yardmaster Connie Hooper (Rosario Dawson) why the men continue their pursuit despite express orders not to, Hooper smiles and with a shrug, says, “I asked them nicely.” Really? There’s a major catastrophe in process, a vehicle that you yourself described as being similar to a missile that is heading toward a densely populated area, and you’re making dumb jokes? Further, our two lead actors – Washington and Pine – have little to no chemistry together. We’re expected, late in the film, to believe that they have suddenly come to understand and respect each other because of the harrowing events that they’ve endured together, but the moment is unearned. The mere fact that they have shared a unique experience does not automatically mean that the two have grown closer, and so attempts at putting a sentimental moment between the two skip by easily.

There are some action-packed scenes, to be sure, some of which are quite tense. One scene, for example, has a Marine being airlifted to the runaway train with the idea being that he will be lowered onto the roof and take control of the vehicle. At speeds nearing 70 mph, the feat is a daring one, and the possibility that something could go wrong hangs in the air just as the man behind the mission does. Also, though it is quickly over-used, POV shots from the engine of several different trains which could be on a collision course with the runaway began effectively. Early on, a train conductor squints worriedly out of a rain-soaked window trying to see the tracks in front of him. The possibility that the monster train could appear around any bend holds some excitement.

In the end, though, the movie fails to deliver. Despite the intimations that there is a vast danger at hand, the times when there is any true sense of possible injury are few and far between. Washington runs along the top of a speeding train with ease, another conductor tries to slow the train by holding the brakes and producing sparks – eventually tumbling off the tracks without any response. He stands frozen in place as the engine tips onto its side. Instead of family members watching the happenings on television with the worried look of one who knows that their loved one is inches away from certain doom, all family members watch on with awe and cheer their support. Chris Pine jumps from a speeding locomotive to the bed of a pick-up without trouble. The movie is alleged to have been based on a true story, but the filmmakers have glossed it up so much that it has become a bland actioner, and any connections that the film might have had to reality are mostly gone.

I went in hoping that this film would be a guilty please, but I sadly received very little pleasure from viewing Unstoppable.