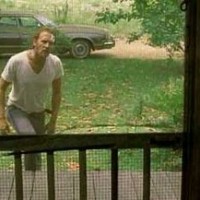 I have now seen all five of director David Gordon Green’s feature-length films. (Yeah, we’re just going to pretend like Your Highness doesn’t exist.) Having reached such a milestone, the only reasonable thing to do is line the movies up against the wall and put ’em in order top five style, with five being least favorite to one being most favorite. In such a scenario, Undertow would fit securely in second place. It’s a strong outing from Green, and perhaps the movie that we can point to as the moment where he began drifting away from languid character studies about small-town folks living small-town lives and began working with the tools that most other filmmakers keep in their kitchen cabinet: thrills, action, vengeance, bad guys, the works.

What’s great about the movie is the way that Green marries the two styles so perfectly, a feat that he would repeat with a fair amount of successful in both Snow Angels and Pineapple Express. After an awkward opening scene featuring Kristen Stewart which proves that her belabored pausing is not limited to the Twilight series, the film sets about putting together the scene: a broken family that lives out in the sticks (Styx?) to escape the scars of the past. There are two boys: Tim, who eats paint and mud and suffers from an anxiety disorder; and Chris. Chris (Jamie Bell) is restless and rowdy – he’s gotten into more than a few scrapes with the law, not to mention one gnarly nail that’s left a hole in his sole (soul?). He gets into arguments with his father (Dermot Mulroney), a man who cares for his children but doesn’t know how to express it. Once we’ve been given some time to understand the mechanics of this small family, the balance is upset by the arrival of their father’s brother Deel (Josh Lucas). It’s hinted that Deel has recently been released from prison, although the audience is never told for what exactly. Unpaid parking tickets, I’d imagine. He exudes an aura of menace constantly, a toothy grin on his face and a lie on his lips. It’s certainly no coincidence that his name is a slight misspelling of the Scottish diel, for devil.

After a burst of violence, Chris and Tim find themselves on the run from the devil, and here is where the movie really splits itself into two parts. The first is the tense, action-packed vision of Deel chasing the boys down. There’s an incredible scene which takes place in a junkyard where the tension is palpable. The children duck under broken appliances and behind rusted cars while their uncle tries to attack them on a psychological level, a tactic which had proven successful earlier on. Meanwhile, his nose twitches like a rat, his right hand fingering the blade he’s brought in order to exact his twisted “justice”, ears cocked for the slightest sound, turning wildly to find his prey. I was going to save this for later, but Lucas steals the show hands-down as the boys’ malicious uncle. His actions become increasingly exaggerated as the story progresses, but the energy in the performance as well as the fact that the character is clearly demented are enough to keep the man from falling into parody.

On the other side of the coin are the two brothers, and when they are not running their story slows down to a grinding halt. Not a halt, really, but they have the time to play in the rain together, lie in a hammock, or feel the warm heartbeat of a baby goat. The world they live in at these times is the same quiet, economically downtrodden vision that Green had peddled in his previous two works: a world of cracked concrete streets spotted with weeds, battered old vehicles, people devastated by life and looking for something real to cling on to. The boys don’t see that, though. You never get the sense that they are homeless, though they are, or that Chris can’t take care of his brother during their flight. They live simply and enjoy one another’s company and Chris takes good care of his younger brother in as nurturing and protective a manner as their mother (God rest her soul) every would have been able.

There are some nails-on-a-chalkboard scenes smattered here and there. I don’t really get the purpose of Stewart’s few scenes, and words are sometimes spoken in sentences I don’t even know how to describe, like, “Can I carve my name in your face?” Another one that R. Ebe points out: “He thinks about infinity. His doctor says his brain’s not ready for it.” They’re not cute or profound. The closest word I can think to describe them is pretentious, but that’s not exactly it. It’s like being weird for the sake of being weird, with the expectation that merely being weird will lend an endearing charm to the line. It doesn’t. And when the awkward unease graduates from one-off lines to entire scenes, such as an extended section in the home of a young black couple right on the tipping point (between serenity and rage, perhaps?), it goes from unfunny to almost unbearable. I shudder to think of the “tow truck” scene. Green has a knack for building an elegant, beautiful picture of an otherwise simple landscape (the junkyard comes to mind again), just like his inspiration and producer Terrence Malick, and much as Green’s own protégé Jeff Nichols. But sometimes, he doesn’t seem to have a grasp on what’s real versus what’s abrasive or unsatisfying. But then, perhaps that’s part of the idea here, given that many scenes end with a bizarre freeze-frame, repetition of the final action, or a change in tint. Those intentionally abrasive qualities in the filmmaking might have bled over into the script-writing, if I were wanting to come up with a benefit-of-doubt.

Again, though, the attributes of the film which work do work wonders. The easy transitions between the action-driven pieces and the easy, unhurried moments are subtle and sweet. Lucas, again, is great. And though it eluded me initially, there’s a brilliant symbolic function to the plank of wood that Chris runs across at the start of the film – and holds onto until almost the end – which in fact works on multiple levels. Undertow is a really great movie with some really awful moments, a fact which is painful but not enough to detract entirely from those instances of wonderment.