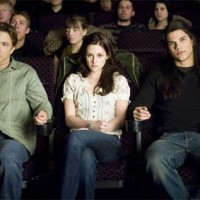 I saw Twilight: New Moon in the theater and thought it was bad, but by the time I got around to writing a review for the film on the Facebook I had mostly forgotten why I had felt that way and chalked it up to the movie being mostly boring. A second viewing convinced me that the film was “abhorrent”. My exact words on the film were: “It goes from being merely bad into being offensive. The fact that this sort of garbage is passed off as entertainment is insulting. I can not think of a single positive thing to say about this movie.” A third viewing has altered my perception once again, if only because I’ve gotten a better understanding of the mindset of Jake Black (Taylor Lautner). All other complaints remain, but I found his character much more relatable than I had previously, his rattling hormones a much more deftly handled picture of puberty than that of the swooning Edward and Bella.

In this installment, Bella is becoming bummed out because she’s going to grow old and she knows that Edward will no longer love her once she is wrinkly and gray-haired. This is the same guy who thinks he’s ugly because he’s got chiseled abs which sparkle like diamonds, so I’m not sure Bella has a good idea of what exactly it is that he finds attractive. In any case, she won’t stop pouting unless her boyfriend agrees to turn her into a vampire, a concept that he is rightly opposed to. The “vampire” conceit was originally a metaphor for pre-marital sex, but that begins making less and less sense as the series progresses. Here, there’s a vampire Vatican which sentences people to vampirism or death, and it doesn’t really make sense to sentence someone to pre-marital sex unless OMG you don’t think they’re really a cult, do you? In the third movie, a new-born army is formed and I think that’s where the metaphor breaks down completely.

I’m really getting off-track here. Bella wants to be a vampire. Some of the Cullen clan are pleased with this desire, others not so much.  Then there’s Edward talking in cryptic phrases and nobody bothers to tell Bella that it fucking hurts to die and nobody in their right mind would ever want to do that. She’s so stubbornly obsessed with killing herself so that she’ll be pretty forever. In an effort to save Bella from herself, Edward moves his family away from Washington and the seasons pass in an actually kind of cool spinning camera montage.

With Edward gone, this gives Bella a chance to cozy up to Jake, who has until now been dutifully absent. They flirt with one another throughout the rest of the film, and I had previously had trouble understanding why Jake should have any feelings at all for the girl except that she’s a girl and they live in the same town. This viewing reminded me that they’ve known each other since there were small children, meaning that their relationship is built on a much stronger foundation than the one that Bella shares with that vampire kid. Though I’ll admit that Jake has an awful habit of removing his shirt whenever possible, it’s the sex-obsessed Bella that flutters eyelids at her platonic friend and tells him that she finds him beautiful. Is it any wonder that he would become confused by her advances? And when he begins to transform into a – I’m not ruining anything here, am I? – werewolf,  Jake doesn’t know what is going on. Which is weird, come to think of it, that nobody in his Indian tribe would have mentioned the possibility that he would gain supernatural powers. Regardless, there is a scene which I found deplorable previously wherein Bella is invited to the movies by a shy boy in her class. Always classy, Bella invites Jake along and pines after Edward the entire time. After the film, Jake growls insults at the boy for being weak. I had previously seen this as a sign of Jake’s utterly loathsome manner, but on this third viewing it occurs to me that he himself doesn’t understand where this rage has erupted from. This also makes his later abandoning of Bella out of concern for her safety make much more sense.

My newfound understanding of Jake’s actions don’t salvage the film entirely, however. The movie is shot through with a “Romeo & Juliet” theme, which is maybe the laziest concept that could be used even before it becomes apparent that there’s no consistency regarding which characters represent the fated lovers. Is it Bella as Juliet and Edward as Romeo? Given Edward’s decision to seek the help of the Volturi to kill him when he thinks that Bella’s life has been lost, that seems to be the clear comparison. But then, the bitter feud between the vampires and werewolves seems to allude to that Shakespearean feud between the Montagues and the Capulets. And if that cheap allusion weren’t grating enough, the film has the audacity to use actual lines from the book, lines like the mind-numbing: “The absence of him is everywhere I look.”

Or how about: “Maybe I’m crazy now, but I guess that’s okay.”

The filmmaking is hardly worth noting, except to say as much. The scenes fade lifelessly into one another, with the exception of the one montage I previously mentioned. There is a very poor sense of tension. The Volturi are hardly menacing, and the possibility that Edward might meet his end barely registers. I can imagine that the scene in the book where Bella first encounters gigantic wolves in the forest might have been a frightening image, especially given that until now she had no knowledge of werewolves, but all dramatic resonance is lost in the film with its ugly CGI mutts. In the most laughably bizarre moment, Bella and Jake are working on a motorbike and a pizza delivery guy shows up at the door of the garage. Bella takes a slice of pizza out of the box and flings it over her shoulder at Jake. Whip-pan over to J.B. catching a wrench in mid-air instead of the slice of pizza… because it’s a ‘clever’ way of cutting! More often than not, though, the images on-screen are mostly dull.

It all culminates in a yawn-worthy finale. The Volturi prove to be ineffectual rulers, a fight sequence begins and sputters out, and Michael Sheen shows up only to prove that he’s willing to take on the stupidest roles (see also: Tron: Legacy). Altogether, I think I may have been right both times previously. Twilight: New Moon is a long, boring mess of stupid dialogue and even more inane plotting.  It wants to be epic and theatrical and mysterious, but doesn’t know where to begin. Some of its characters (Bella, in particular) are impossible to care about, which makes their adventures difficult to maintain interest in. And the whole show is done without any heart or energy. While it is bad, I suppose New Moon probably isn’t the affront to human decency that I once felt that it was.