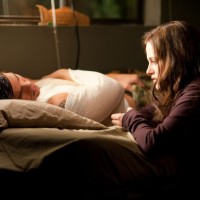 The third movie in the Twilight series opens with teenager Bella Swan reading Robert Frost’s “The Road Not Taken” with a seriousness that suggests that she, or the filmmakers, or Stephenie Meyer (choose your target) actually believes that this is a subtle choice of symbolic literature. I suppose it’s marginally better than the previous movie’s limp homages to Shakespeare, but at best this takes a high school English essay previously graded F and turns it into a D.

There is extremely little to like in the Twilight movies. Perhaps it shouldn’t be a surprise that the entirety of literary acumen that fans of the saga can bring to the table is a debate over whether vampire Edward Cullen (Pattinson) or werewolf Jacob Black (Lautner) is the OMG HOTTER character. I’m not trying to imply that it is wrong to have attractive leads, but the books were allegedly a broad allegory about the virtue of abstinence. The movies have quickly proven to be about nothing at all.

In Eclipse, we find our heroine Bella caught between two boys that she inexplicably loves. One is the monstrous Edward, who represents a world ending in ice. Bella continually begs him to turn her into a vampire, and as in the second movie, nobody tells her that dying is not a fun thing to do. Instead, they talk to her about how precious is her ability to decide what her fate will be. Meanwhile, Edward does such seriously frightening things as disable Bella’s car to prevent her from visiting her friends. That’s a relationship that’s going to end well! On the other side of the equation is the abusive Jacob, who represents a world ending in fire. He is quick to throw objects in a jealous rage when he gets upset or else claims his need to “kill something”. There is even a moment, as the Rifftrax crew point out, where Jacob sexually assaults Bella. Ha-ha! Oh, it was a misunderstanding! As long as they’re not having sex, it’s all okay!

Maybe you think I’m taking this all too seriously. But here’s the thing: the movie does not take this seriously at all. Bella acts like she is an adult; she and Jacob and Edward talk as though they are all making huge, important choices in their lives – and yet they all treat the situation as though they are children. The most disturbing thing is that everybody tries to talk Bella out of this clearly unhealthy relationship triangle. One character talks about a time when he thought that he was in love, but was simply being manipulated into killing dozens of children. Another character tells Bella about a time when she felt deliriously in love, only to be gang-raped by her beau and his friends in the middle of a busy street. These anecdotes roll easily off of Bella’s back because she is not living in the real world. “Those sorts of things won’t happen to me!” she thinks, unaware that the boys she hangs around with say things like ‘She doesn’t know what she wants’ with controlling certainty.

And that’s not even getting into the B-story, about a vampire army being constructed in the shadows, only to be easily destroyed in a curiously bloodless fight sequence later on. These vampires, we are told, are extra-strong because they are “newborn”, i.e. recently transformed into vampires. They’re vicious; they’ll crush you if they get their arms around you and are so brutally clever that you can never defeat them with the obvious attack. Cut to lame CGI-fest where vampires and werewolves lazily jump at each other and every one of the baddies gets quickly defeated, no problems. The movie does not take anything seriously.

But it’s not just the story or the awful dialogue (“I’ve always felt out of step. Like literally stumbling through my life. I’ve never felt normal, because I’m not normal, and I don’t wanna be.”) – although, honestly, the dialogue isn’t nearly as terrible as it was in New Moon. The failure of this film can also be attributed to the actors. It’s not just that they’re bad actors, although they are. What is it that makes them all pause multiple times in a single sentence? They can’t all have been directed to do that, can they? It goes beyond the inability to convincingly evoke emotions – these actors are unable to convincingly play a character. Are we supposed to like any of these characters? The actors don’t have enough charisma to give their characters any relatability. Every time any of the three leads is on-screen, I cringe, because the characters all come across as just awful, self-obsessed people. It might be different if that were part of the idea, but these are supposed to be characters we root for!

Then there’s the directing, which often times seems to have been made using a set of pre-chosen camera angles such as you would find on a make-your-own-short-video site like Xtranormal (http://bit.ly/fHRhRL). During many of the most important scenes, the camera cuts back and forth from one side of the characters to the other for no reason at all. Or the focus of the scene is lost entirely, such as a moment where the leader of the vampire clan and the leader of the werewolves shake hands – this should be a momentous happening, yet it is shown and cut away from in half a second. Because what’s more important is Bella and Jacob pretending that the fate of the universe depends on their tepid romance.

I really thought that there was some genuine promise in the first Twilight movie. I thought that if they had focused on Edward’s intense need for human blood, if they had focused the film on the strength it takes him to avoid mangling his girlfriend, there would be a stronger emotional center to the whole proceeding. By this point in the series, the movies have all but forgotten that Edward even drinks blood. Nothing is taken seriously. And then Bella has the gall to claim that it’s really about her personal growth and not about which boy should she choose?

I don’t want to hate Twilight, I really don’t. But I feel like the movies are actually encouraging me to do so by being just totally repellent. There is so little of value here. It fails as an action film, it fails as a drama, and it crashes and burns as a love story. There is virtually nothing endearing about Eclipse.

One Response to “Twilight: Eclipse”