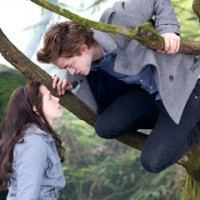 I suppose you could say that Twilight succeeds because it perfectly captures the awkward, angst-ridden, hormone-driven world of teenagers, although when you consider that this is almost impossible to tell apart from really bad acting it becomes less of an accomplishment. The series has always been about the thinly-veiled metaphor of sexual desire vs. abstinence, with vampire Edward Cullen (Robert Pattinson) holding himself back from taking a chunk out of the neck of the new girl, Bella Swan (Kristen Stewart). It’s interesting to note that the author of the YA novels which the movies were based on actually began writing a companion piece called “Midnight Sun” from Edward’s perspective, but it was never finished. Instead, we’re given Bella as the center, in a town so unreal and a story so unengaging that it becomes difficult to find anything to appreciate at all.

Bella arrives in Forks, Washington, and in voice-over explains that she moved from Arizona because she could tell that her mother was unhappy being unable to travel with her baseball-playing new husband. How selfless and noble! It is in Forks, though, that Bella becomes infatuated with this pale boy Edward who seeks only to avoid her and growls things like, “Why can’t you watch where you’re going?” This gruff exterior is obviously hiding a sensitive artiste deep down, which is why Bella decides that she is “irrevocably in love” with him… even after he confesses to a slew of murders. Edward describes to the girl what kind of a monster he is, but she is unmoved. “I don’t care,” Bella insists, proving that love is stronger than common sense. She is the kind of girl who would write letters to a convict, convinced that her devotion is the one thing that can keep him out of prison in the future.

There are lazily handled hints of a feud between the Cullen family and the Quileute Indian group which lives on a reservation nearby. Bella’s childhood friend Jake Black (Taylor Lautner) has a surprisingly small role in this first film of the series, appearing only a few times to tell the story of the Cold Ones and how they are “different” from the rest of us, wink wink. Most of the film involves Bella’s slow realization of Edward’s true nature and their blossoming relationship, which is hardly a relationship at all. The only thing that the two seem to have in common is a shared fondness for classical music – aside from this, they stammer at one another and make heavy-handed declarations of undying love, but it’s unclear why they feel this way. In comparison, my gold standard for teen romance is Say Anything, wherein the two teenaged characters have a conversation on the phone and we hear the converation – they have an actual discussion about their feelings on a subject. In this movie, the best on tap is stilted exchanges covered by awful soft-indie rock tripe.

Then there is a baseball scene which is either laughable or just thoroughly unnecessary. It exists just to show that these characters are vampires, with Bella exclaiming in joy that she understands why they can only play America’s pastime during lightning storms – because they hit the ball so hard it sounds like thunder! It is here that we are introduced to the villains, the primary one being a vampire named James who seeks to destroy the human girl for reasons that are muddled at best and nonexistent at worst. Is she special somehow, other than by virtue of the fact that she is the narrator? Why Bella, as opposed to one of the other Forks girls… Jessica (Anna Kendrick), perhaps? This bizarre storyline, introduced late in the game, involves visions of the future and an until-then unmentioned ballet school from Bella’s childhood which, like, is totally important to her somehow. It gives the opportunity for some slow-mo action sequences, though, which should satisfy the men in the audience looking for a good old fashioned vampire throwdown.

Not that these action sequences are pulled off with any sort of distinctiveness. The direction of Catherine Hardwicke reaches a level of incompetence that I can only compare to 2011’s Abduction. Her grasp of action scenes is literally limited to slow-mo which switches to fast-motion suddenly – there is nothing else to say about them. Most striking of all, however, is the moment when Bella finally confronts Edward on his true nature. The camera circles around the two wildly, first moving clockwise, then counter-clockwise. It zooms in and past the actors, it rests twenty feet away. There’s no rhyme or reason here, as if the intent was to convey heart-pounding intensity but nobody could think of a way to get that across visually without just keeping the camera moving constantly. It’s so noticeable that it takes the viewer out of the action on-screen, which is something you only want to happen when you’re Robert Altman filming The Player.

To match the direction is the performance of the actors, particularly the one-note Pattinson who seems to have confused listlessness with tortured brooding. Actually, I take that back, Stewart is unmatched for dead-eyed blankness. It takes a special kind of actress to view a crime scene and state robotically, “What is going on.” Bella’s high school classmates fill various stereotypes, and the Cullen family has little personality themselves. This is rectified to some degree by later installments in the series which develop their characters to a greater extent, but here they are over-shadowed completely by the long-pause proclamations of Bella and Edward. Though perhaps that’s intentional: because Edward is the most important thing to Bella, and she is our narrator, the limited scope of the narrative may be a reflection of her limited perspective regarding the world she inhabits. There is, after all, a moment where Edward asks Bella to hold onto his neck (“Better hold on tight, spider monkey!” he says, making me wish that he had retained that pet name for her throughout the series) and the two climb above the fog to the treetops. The fog, here, being symbolic of “everyone else in the world”, the vision from this height being a verdant sea interrupted only by her sparkly boy-toy. Did I forget to mention that Edward sparkles in the sunlight? Yeah, like grape juice.

If this were truly the intent, it could have been drawn more clearly. But given the flailing of the “vampire reveal” sequence earlier in the film, Hardwicke and her crew clearly did not have the chops to successfully stage anything that requires subtlety, tension, or depth. It’s an awful mess, dressed up in atmospherics. It’s true that there are many who consider this first film the best in the Twilight series, but it would be a mistake to consider that a compliment.