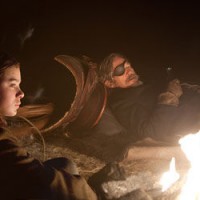 I was glad to have watched the original 1969 film starring John Wayne so recently before seeing the Coens’ updated 2010 version. I’m not sure that I would have appreciated the remake quite so much without the benefit of seeing what the original had done wrong. As it is, though, I walked out of the theater and claimed that the new version was 10 times better than its predecessor. Seemingly every complaint I had before was assuaged here.

The largest complaint that I had with True Grit (1969) is that it feels much more suited for a stage play than for film. The movie never really built a case for being a movie, and I noted that the film was “so aware of what it’s doing, it never feels organic.” On the contrary, True Grit (2010) made a strong case for its existence. Let’s take a look at one of the most famous scenes in the original film – when Rooster Cogburn and his two misfit partners oust a couple of bandits from an abandoned house by throwing a coat over the chimney and smoking them out. In the original, the action is done in daylight and relegated to a few bits of dialogue between both parties, followed by Glen Campbell throwing a coat over the chimney with a grin and waiting for the baddies to run out. In the remake, it’s done at dark. Instead of LaBeouf (here played by Matt Damon rather than Campbell), the person sent up to cover the chimney is the young girl Mattie Ross. The tension is thick as she walks cautiously over the creaking shingles. When the men inside realize that there is little chance for escape, they shoot through the roof at the girl.

Many of the images in this film are much more violent and frightening than its earlier counterpart. Where I found myself wondering why “Lucky” Ned Pepper was so nice to Maddie in the original film if he was alleged to be some horrible criminal, he was convincingly cruel in the Coens’ version and his fascination with the girl vigilante is much easier to understand. More importantly, though, the god-awful dialogue in the original film which only served to aid the sense of artificiality has been polished down and feels much more natural here. There are still moments where the wordplay of the script remains (particularly in the pony-selling scene early on), but it is not nearly as hard to stomach as it was previously.

Mostly, though, this movie’s greatest achievement is selling the relationships between U.S. marshal Rooster Cogburn, Texas Ranger LaBeouf, and Mattie Ross. It was from spending time thinking about the 1969 film that I realized the meaning of the title was not limited to Wayne’s character – the movie never really took the time to make it clear. Here, though, we see the friction between the three characters clearly and their slow realization that they are all leaning upon one another becomes central to the action. LaBeouf in particular is used to much greater effect, both as a foil to Cogburn and as a loyal friend. His last feat in the 1969 film was heroic but easily glossed over – the 2010 version makes it a point to have Mattie defend his honor, and later for him to defend his own. John Wayne played Cogburn in the original movie as more of a moral crusader than a man who liked to “pull a cork”, as other characters would often note. Jeff Bridges’ take on the character amps up his alcoholism, making the man sometimes seem like little more than an old fool – but in a similar fashion, Cogburn proves his grit in a high-stakes way. The scene is almost identical to its 1969 counterpart, but earlier dialogue which brings more depth to the finale is highlighted in such a way that it creates a much more visceral viewing experience.

And then there is Hailee Steinfeld as Mattie, who deserves a paragraph of her own. The most revealing moment in the original film came when Mattie crossed a river on her horse, but it was because of the reaction of Wayne as Cogburn that it meant anything at all. That scene is not retained in the Coens’ version, which disappointed me at first, but it soon became clear that they had bigger goals in mind. This Mattie is a bad-ass. Although she talked the talk in 1969, when it came time to put up or shut up, Mattie was usually left on the sidelines. Cogburn and LaBeouf would face the bad guys while Mattie sat back in safety on her horse. About the only time she showed any true resolve toward finding her father’s killer was when she actually faced him late in the film. This time, though, LaBeouf is absent for some time, allowing Mattie the chance to show that she doesn’t consider their journey to be as simple as a coon hunt – she means business. She’s still a girl and a child, as evidenced by the way she offers to tell a multi-part ghost story over the campfire while her counterparts are arguing. But where the 1969 Mattie could do little but offer her lawyer as a weapon (“Lawyer J. Noble Dagget will hear about this!”), 2010’s Mattie isn’t afraid to climb a tree with a knife in her teeth, and she certainly doesn’t yelp with terror upon seeing a skeleton.

By the movie’s climax, I still found myself wondering about the 1969 film, “How are [the characters] different than they were before? Why should they care about one another?” The remake answers that question. They care about each other because they have come to trust one another, to rely on each other despite their individual weaknesses. They have come to appreciate what each member of their group has to offer. The John Wayne version of the film ended with a cheesy epilogue that tried to force some sort of sweetness between Cogburn and Mattie before the credits roll. The 2010 movie did not need to force any sweetness because it was wholly earned. In a magnificent sequence, Bridges’ Cogburn rushes the injured Mattie across the plains and forests in order to get her to a doctor. Just look at the way this scene is filmed in both films – in 1969, a long shot showing the characters’ place in the vast openness; in 2010, jolted and askew, often from Mattie’s perspective looking up hazily at Cogburn. When their horse grows too tired to continue and Cogburn pushes onward on foot, it’s so much more of an emotional investment than were he to simply hijack a carriage as he did in the 1969 film (again, in bright daylight!).

There are a lot of similarities between both versions of the film. A lot of the dialogue is the same, many of the shots are almost identical, and the story of the one (for the most part) follows the other pretty much beat for beat. There are some small alterations that have been made, of course, almost all of which benefit the movie entirely. To anybody who thought it was ridiculous when LaBeouf suddenly appeared at Ned Pepper’s encampment in the original film, that plot hole is corrected here. But the Coens’ version is filmmaking done in a much more masterful way, adding to the story a much stronger emotional core than the original was able to muster by simply highlighting certain details, giving the characters the time to grow toward one another, and altogether just helming a more skillfully constructed picture.

I’m not sure whether I would have as much praise for the 2010 version of True Grit if I hadn’t so recently seen the original and therefore been so aware of all of the things that had previously been done wrong which were set right here. But knowing what I know now, it will be hard to return the John Wayne version of the film. The Coens have simply made a much better movie.