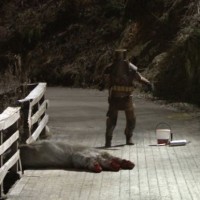 In Troll Hunter – sorry, IMDb, I meant Trollhunter – a group of college students set out to expose a strange bear-killing conspiracy by following a known poacher (Otto Jespersen) during his nightly travails. What they discover instead is that the poacher, named Hans, is actually a hunter of trolls, or “troll hunter” if you will. As it turns out, trolls are gigantic lumbering human-like creatures which have been living in the mountains and woodlands of Norway and other European countries since before recorded history. The student filmmakers decide that this will be the thesis project of the century, and elect to follow Hans into the heart of darkness in order to videotape these spectacular monsters. As the trolls have the ability to sniff out the blood of Christian men, there is a moment where a camera-woman is asked whether she believes in “God or Jesus”. When she responds that she is Muslim, the students look to Hans wondering if it would be acceptable to include a Muslim in their group. “I don’t know, I guess we’ll find out,” Hans responds without concern.

The film gets a lot of mileage out of this extremely dry humor, of marrying the fantastic with the pedantic. It does, however, succumb to the tendency of stretching these concepts too thin. Furthermore, as many other critics have pointed out, the straight running-through-the-woods or driving-through-Norway segments of the movie are plentiful; often they are handled poorly or else feel entirely superfluous.

There are items which are specific to the plot which bothered me, too, although I don’t believe there is any point in hammering on those with too much zeal. Their inclusion alone, though bothersome to myself, are not enough to make or break the film entirely. I’m talking about things like the use of Christian music to attract the trolls (how can these animals possibly recognize gospel music?), Hans’ split-second turn from mysterious drifter to open and talkative guide, one character’s refusal to admit his true feelings despite knowing the dire consequences ahead of time. All are real and valid complaints (I never have invalid complaints), but I think the real heart of the film lies in its attempts to blend mockumentary horror, a la Cloverfield or the Blair Witch Project, with the unbalanced humor of something like Wristcutters: A Love Story or Defending Your Life. The latter two films put an emphasis on contrasting something extraordinary with something mundane; Troll Hunter attempts the same by making the hunting of trolls an endeavor plagued by muddled bureaucracy and lack of foresight. With a few exceptions (the epilogue, for instance), the sincere humor works fairly well. The hurdle that the film has comes when it attempts to sell the horror elements as truly horrific. Norwegian CGI, the sort which doesn’t compare to the likes of the good ol’ U.S.A., does little to sell the trolls as believably real; the decision to show each new monster in detail is exciting from the standpoint of a guy who paid money to see a fun romp on the big-screen, but less so for my film critic’s brain which notes that the awesome trolls are used in place of more direct humor and undermine the horror aspect by being goofy.

I suppose it’s a fine line to walk. Maybe Christopher Columbus’ American re-make – announced the same day the original film hit theaters state-side, naturally – will be able to walk that tightrope with a little bit more grace. It wasn’t really until the finale, when things began growing toward the unhinged, that the terror began to sink in. For example, one of the characters is told that he has likely contracted rabies (spoiler? Do you feel spoiled?), a prognosis which Hans delivers in his typical tone of disinterest. The sudden and severe fright that accompanies this revelation, coupled with Hans’ business-as-usual explanation of the situation, makes for an oddly tense and spectacularly funny scene. But the humor here is Sahara dry, not the sort that will leave a viewer rolling in the aisles, but instead the kind which can be appreciated. Star Otto Jespersen is widely known in his home country for being a button-pushing satirist, at one point attacked for anti-Semitism for mourning the fleas on Nazi concentration camp victims. Many saw this as insensitive or racist, but Jespersen’s intent was precisely that: to get under people’s skin. For comparison, I submit Banksy’s faux-or-no documentary Exit Through the Gift Shop. That film follows the exploits of a man who fashions himself into a graffiti artist via commercial methods, and the line between what is real and what is a joke is hard to draw: the movie is extremely comedic, but is it funny?

I guess that’s a better wording to use with regard to Troll Hunter. There are a multitude of comedic elements (the “kill forms” come to mind), but they may not be necessarily funny. Meanwhile, these elements are brushing elbows with the attempt at being somewhat menacing and in the ensuing scuffle, nobody wins. There are certainly things which work well. I like the fact that some of the subplots are never resolved. In the end, though, I wanted to like the movie a lot more than I was able to. It’s a rollicking good time, and the credits blast with an awesome song by Norwegian band Kvelertak, but altogether the film is a lot more airy than I had expected. Troll Hunter moves fast and moves all around, but never really got around to being moving in any particular way. It’s sugary fun, but could have been more.