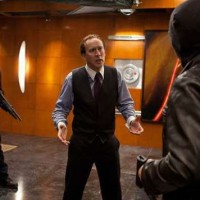 It’s kind of amazing to me that “home invasion thriller” is considered its own film genre, that the plot has gotten to be so played out that we now are able to mark it off by this niche genre that has been created. Why are we not calling them HITs yet? Let’s get on that, people. The reason that I bring this up is because Trespass is an intriguingly bizarre film on its own terms (which is not to say “successful”, mind you), but when thought of within the context of the HIT genre, it’s a poor example of what films in its class can accomplish. Uncertain whether it wants to be R-rated or PG-13, the movie is a mess led by a hammy Ben Mendelsohn, a twisting plot which makes less and less sense as time goes on, and, oh yeah

It was the AVClub’s Nathan Rabin who described the film as containing Nicolas Cage “at his most agreeably unhinged”, a description which could not have excited me more. When the actor chooses a role that allows him to be loud, weird, twitchy, or any combination of those three is when he is at his best. If Trespass offers this, it’s a surefire classic and manages to bring out what 2011’s earlier offering Drive Angry did not. Unfortunately, there are only hints of the manic energy that the man could have brought to the table; he seems to be edging closer and closer to flying totally off the rails, but never quite makes it. Is it any wonder that he walked off the set before filming began because he wanted to play the antagonist?

Here is the story, in broad terms: Cage plays Kyle Miller, a diamond dealer who lives in a beautiful house on the lake that his wife Sarah (Nicole Kidman) designed. The two have a rocky relationship, primarily because he has a job, and their teenage daughter Avery is going through those rebellious years that often leaves her at odds with her parents as well. Nobody is happy, and when four thieves show up at the house dressed as police officers and take the family hostage, it only exacerbates the unhappiness. They’re here because they saw Miller with a handful of expensive jewels, and they’re certain that he’s got the rocks locked up in a wall-safe in the house. With guns pointed at the family’s heads, they demand that Kyle give them the loot, but our man Miller refuses.

This is just set-up for an increasingly peculiar sequence of events which includes but is not limited to: kidney thievery, home videos, double-crosses, staggeringly stupid lust, sedatives, and a version of Chekhov’s gun where a telephone pole replaces the gun. I don’t know if I can describe it in greater detail without giving away too much. The villains of the film, led by Mendelsohn (trivia: he played Cage’s best friend in Knowing), do not seem ready to enact any violence – with the exception of a smack across the face with the butt of a gun or a smashed hand. They point guns at their captives, but there’s a curious lack of tension because there’s never really any fear that any harm will come to the family. Kidman, who has been tasked with being the only member of the family who is genuinely frightened, does not really sell the terror with her tearless sobbing. Because the bad guys aren’t prepared to be bad, they end up talking and this is how the myriad reasons for the heist come to light. One of the bad guys has become obsessed with Kidman to a ridiculous degree, while another is a silent assassin who is hanging around for.. moral support? There’s also a girl bad guy who immediately goes upstairs to try on clothes.

There’s the requisite back and forth as the family seems to gain the upper hand, then the villains re-take the lead. There’s nothing particularly original or interesting here, and the movie doesn’t try too hard to make ends meet. One character is seemingly killed and lies on the floor for some time before suddenly waking up at the most opportune moment – an action which is implausible, but dramatically convenient. When a window breaks, a silent alarm triggers and the security company calls to ensure that everything is alright. The tension is palpable as the woman at the call center hovers her mouse over the “call off the cops” button. At one point, a character lets Avery leave, then chases her down outside and hauls her back in as though the girl had escaped. It makes no sense.

Cage sometimes screams at his attackers and Mendelsohn hisses like a snake, but it’s all for naught as the movie loses track of what it’s trying to do. There’s not even any visual dynamism to bring sparks to the fire, despite the pairing of director Joel Schumacher and cinematographer Andrzej Bartkowiak – their first time working together since 1992’s spectacular Falling Down. The finale finds the movie in a tailspin, and this is honestly where the “so bad it’s good” crowd might find their meat, but it’s hard to forgive the movie for not carrying that same effectiveness from the first frame. The film had the opportunity to ratchet up the craziness, to imitate Face/Off for sheer go-for-broke shock value. Instead, it lets Cage stew in relative silence after a few early outburts, and keeps the bad guys mostly impotent.

Let me re-write this movie. Go the Saw route, i.e. have the bad guys kill somebody violently and early, leave the bloody body in the middle of the room as a reminder of what they are capable of. Because Kyle knows his knowledge of the combination to get inside the safe is valuable, he has leverage and can prevent his family from being slaughtered – they stay in the picture, but use your silent sadist, played by Dash Mihok (Romeo + Juliet) as a true source of tension. All of the antagonists are potential “wild cards” (Rabin’s words, not mine), and the shifting weight of trying to keep the whole plan from toppling gives the opportunity for real scares. If you hold a knife to a woman’s throat, we have to believe that her blood is about to be spilled. If you’re going to include a subplot about one of the bad guys having a crush on Kidman, don’t make him an idiot and an unthinking deus ex machina. He should turn out to be the most vicious of the bunch. Embrace the R rating. Let Cage do whatever the hell he wants.

The Trespass that exists is sloppy and bland. It does not play to its strengths, and consequently endured a degrading two-week turnaround from theaters to DVD. With names and nothing else, you can try to scrape together what humor you can out of it, but otherwise I’d suggest that you – yes, I’m doing it – pass on Trespass.