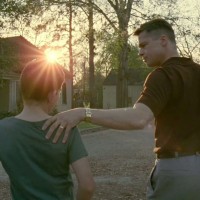 Terrence Malick’s Tree of Life, the director’s fifth feature film in 38 years, is at times glorious, at times tedious. It’s hard to talk about the movie without speaking in seeming paradoxes. This is a movie about the entirety of existence, and it is about one specific family, one specific man. It is about the wrath of nature, the soft acceptance of grace. It is about good and it is about evil, or perhaps just coincidence. It stretches back to the beginning of time, only to bring us to a place where the concept is foreign, to twin meanings of the word timeless. Yeah, it’s that kind of movie. It moves slow and awkwardly, disparate scenes combining to form a larger picture… of what? An endless metaphor, most of the characters are mere archetypes. The lack of definition leaves the film’s meaning(s) open to interpretation, so long as the viewer is open to interpreting. One man, while leaving the theater, said, “They should pay you to see that movie.”

Yeah, it’s that kind of movie.

The “story” of the film, if it can be called that, centers on a boy named Jack O’Brien who lives in Texas with his Mother, Father, and two brothers. Jack sometimes narrates in voice-over, or perhaps narrates isn’t the precise term. Comments? Contemplates? The voice-over seems to come from a place outside of time, not something that the boy actually says at any one point his life, but instead says only in his mind, or in his subconscious. Early on, the Mother (Jessica Chastain, Take Shelter) provides similar words, explaining that Nature is harsh and sometimes cruel while Grace is forgiving, willing to accept insult, able to withstand injury. The boys’ parents clearly represent these two concepts, the mostly silent Mother playing Grace to the demanding Father (Brad Pitt) as Nature. It would be incorrect to imagine that the movie seeks to pit the two against one another, as Jack’s poignant line from the trailer (“Mother, Father, always you wrestle inside me. Always you will.”) illustrates – in addition to the simple fact that the two are shown as a married couple in love, not as bitter enemies. The question being asked is not which is right, but instead how does one live with the two contrasting principles?

It’s easily extrapolated to the boys’ religious upbringing. It’s a specifically Christian upbringing, but it’s more representative of the feelings of anybody who believes in some order to the universe. Dirt and rocks and fire and gases come together to form stars, planets, out of nothing. Then the stars roil with fire and explode outward, or gigantic meteors plunge into the planets’ oceans. Atoms and strands of DNA combine and form a living organism – a fish, a dinosaur, a human baby – but its life is extinguished suddenly. Jack wonders why his father says that it’s wrong to interrupt people while they are talking, then does what he instructs his son not to. In a way, the question is directed at God/Life: how can we be good, if God is not? The repeated image of a boy scarred by fire keeps the issue top of mind. Or, as Jack’s father tells his sons with complete sincerity, “You can’t be too good if you want to get ahead in this life.” How good is too good? Where do you draw the line?

Meanwhile, the film traffics in the beautiful imagery typical of a Malick picture. Aided by master cinematographer Emmanuel Lubezki, who helped make 2006’s Children of Men an awesome visual treat (and in fact worked with Malick previously on The New World), the director lives up to his reputation for providing – if nothing else – a vibrant tapestry of visual splendor. Returning to a pulsating, multi-colored light between chapters, Tree of Life brings breathtaking visions of vast deserts, lush forests, clear blue seas. Bright galaxies are sprayed across the darkness of space, angular and reflective skyscrapers jut upward into the sky, a veritable birdemic swoops and sways in the waning sunlight. It’s gorgeous to look at on its own, but even more exciting as each new clip brings added depth to the vast symbolism that the film seeks to explore. There’s not a scene, not a movement that is not made with purpose. The way that the Father puts his hand on his son’s shoulders is deliberate, the way that young Jack looks at his family members, the way that Jack suddenly shoots into the frame while kicking a can. Which reminds me: it would be a crime to forget the extraordinary, driving score by Alexandre Desplat (The King’s Speech, Harry Potter and the Deathly Hallows, The Curious Case of Benjamin Button). The score does as much to bring intensity to the images as the editing does. One scene in particular, where the three brothers play games around the yard as the camera swings around them, is punctuated with a rousing, triumphant movement in the score. It feels both unusual and and entirely perfect complement to the moment.

You might imagine that, since Tree of Life deals largely in archetypes and broad metaphor, that it would be lacking in emotionality. In truth, there are several thrilling moments where the emotional release (or restraint) of the moment helps to bring a level of tension to the proceedings. Many of these moments involve the reactionary parenting style of the Father, a man who strikes some measure of fear among his children because of his fickle and sometimes violent nature. While the spats between father and son are among the most vividly emotional sequences, there are many others to point to. A nail-biting pair of scenes wherein a younger brother puts his safety in Jack’s hands; a gripping scene of prurient motive; an early funereal situation which leaves the primary characters in a state of heartbreak and loss. There are few times when the movie explicitly states its intentions, leaving the performance of the actors to speak for itself.

With all of that said, the family’s struggles are curiously disjointed and anecdotal. Interspersed with images of Jack as a boy are mostly muted moments of Jack as an adult (played by Sean Penn). I was never sold on the need for Penn’s cameo, except maybe as some kind of indication that life goes on or proceeds somehow. He did not seem to be an extension of the young Jack in any meaningful way, leaving me uncertain at the end of the movie just who in fact he was supposed to be (thank you, IMDb for clearing up my confusion). Perhaps I missed a line where the character’s name is spoken, but I feel that there’s some failure in the compatibility of the two versions of the character if the only way to know for sure that they are one and the same is to listen closely for a verbal cue. A lot of the film is silent, with Malick’s tendency toward letting the imagery alone speak for the film sometimes leaning toward the unbecoming: as the film nears its conclusion, the images turn toward simplicity (a flat beach, a black-and-white photo of a planet rising) and therefore lack the same dynamism of some of that which had come prior.

Tree of Life is a really expansive, thoughtful, and very intense film. It covers a lot of ground in a short frame of time, yet also seems to go nowhere (or in circles) when its path would benefit from a more conventionally linear organization. I don’t mean to imply that the film should have had a harder concept in a narrative sense, or that the movie is wrong for jumping in and out of time and realism (e.g. the underwater house). Instead, I keep coming back to Penn. I understand the idea that Jack is affected by both of his parents, by the dual facets of life which haunt each of us as human beings. But I’m at a loss for how Penn’s version of Jack comes from the younger version, or the significance of his dream journey through a doorway in the middle of nowhere. I felt a similar ambivalence after viewing Malick’s The Thin Red Line. Those moments of startling, majestic clarity are there in both films. Yet each feels undermined by the inability to reign in the picture somewhat, or not being able to determine when to leave those philosophical musings open-ended versus when to narrow them down.

This is a strong film from an artist who is totally individual, but more the seeds of Life than the tree.