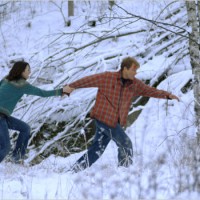 I wanted to like Transsiberian a lot more than I did, although that’s not to say that it isn’t a fine film. Although I have problems with it, I’d still highly recommend watching it if you ever get the chance. It’s a thriller that builds as it goes, like a train heading ever nearer a broken bridge. As the danger become more imminent, the sense of dread only grows.

And that works mighty well in the film’s favor. Many will compare it to Hitchcock, although having seen few of the Hitch’s films, I don’t feel comfortable making such a comparison. It’s a movie that starts out slow, introduces the viewer to all of the major players and lets us get comfortable with them before dropping the other shoe. But once things get in motion, they don’t let up. I wouldn’t say that the movie has twists, per se, but it doesn’t go exactly in the directions you might be expecting. I think that’s why it’s mostly a positive experience – because although it acknowledges the ideas that its audience must be contemplating, it doesn’t necessarily follow them entirely.

And then there’s the fantastic performances by Ben Kingsley, Eduardo Noriega, and especially Emily Mortimer. Mortimer’s character is hard to read. She plays the bad-girl-gone-good role with the same fragile balance as Natalie Portman in Black Swan; she stands sure-footed and reserved, but it feels like any slight gust could send her careening toward calamity. Watch her snap at her husband, “Kill my demons, Roy, and my angels might die too.” She’s been mostly led by Roy until that point, so it’s a shock that is sold by Mortimer.

Unfortunately, there are other times when the actors don’t do as well at selling their character transformations. There is one particular moment near the end of the film where Jess (Mortimer) has every reason to be truthful, but is unapologetically dishonest. It’s difficult to understand why the character would hold to that course. More glaring, though, is Roy (Woody Harrelson), who spends most of the movie playing the geeky husband of reformed bad girl Jess. As the situation gets more desperate, he becomes a commanding presence – a chance which feels unlikely at best and unbelievable at worst. And then it’s not even really commented on, despite the fact that it represents a radical shift in the Roy’s entire character. It functions mostly as a way to keep the action moving, which is disappointing, even if the action itself is engaging.

What’s most distressing about the film, though, is the fact that it treats its audience like idiots. It repeatedly focuses on things that are almost certain to be important later (a continuous shot of a suitcase on a bed, for instance), then beats us over the head with flashbacks later on whenever the characters realize the importance. Remember the suitcase??? Remember that??? These flashbacks took me out of the movie because I was only thinking about how unnecessary and condescending it was to repeat things that even casual movie-watchers would easily pick up on. And even if they weren’t able to pick up on the not-so-subtle clues, bravi!, it will only make the second viewing that much sweeter. Please, please allow the actors to carry the scene, rather than a flashback to indicate ‘oh no, she’s scared that they’re gonna find out something’. Isn’t it the fear that should be the point of the scene, rather than the thing that is likely to be found out?

The final few moments are also clumsily literal. It’s almost like Transsiberian is working toward two different goals, like the train is heading to Moscow and back to Beijing at the same time. The one goal is the dark, largely psychological story of Roy and especially Jess as their paranoia grows (it’s all set off by a Frenchman who cautions that in Russia, the police aren’t above kidnapping you, torturing you, and interrogating you for days). He’s just.. he’s just joking, right? This is the heart of the film, in my opinion. The second goal is to tell this physical story of drugs and money and crime and punishment. Kingsley is a good actor, but his character is the biggest hindrance to a great film. He serves to keep the plot’s eyes on a concrete objective, when the strength of the film lies not in the concrete but in the abstract – in the high tension of the multiple characters, the dread of never knowing who to trust.

Transsiberian is a good film. I do have problems with it, problems that I believe are too clear to ignore. I don’t know if there’s necessarily more that’s done right than there is that is done wrong here, but the things that are done right are so right that they mostly overshadow the missteps. It’s not a perfect movie, but it’s definitely a satisfying appetizer until a perfect movie comes along.