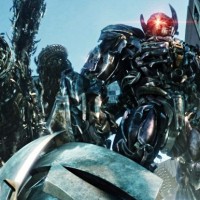 “We were once a race of peaceful, intelligent mechanical beings,” autobot leader Optimus Prime says in voice-over at the start of the third in the lucrative Transformers series. It’s laughable to hear said aloud, but this is almost the only funny thing in the film – and it’s not even meant to be a joke. The rest of the movie is nearly three hours of inane plot that lifts scenes straight from better movies (Jurassic Park, Aladdin, The Dark Knight) or else spins its wheels going in circles and following the dotted line left by its two predecessors. So this one has a better sense of action sequences, literally going into slow motion in order to make them more comprehensible – proving that director Michael Bay has heard the squeals of film critics. So the violence is ramped up. Aside from those two changes, there’s little to nothing new here. The movie even brings in characters from the previous films just so that they can make their requisite appearance and disappear once again.

But this shouldn’t come as a surprise, I suppose. When what you’ve been doing netted you $863 million last time, it’s not hard to see where there’s the temptation to try to contain that magic as much as you can. What did people like about the last movie? Was it the wacky parents of Sam Witwicky (Shia LaBeouf)? Well, throw ’em into Dark of the Moon, even if their presence is unnecessary at best and just total stalling at worst. Was it the hilarious comedy of John Turturro? Make sure he’s featured prominently in this installment, though his involvement in the plot is negligible at best and entirely uninvolved at worst. Was it the smooth curves of Megan Fox? Well, get underwear model Rosie Huntington-Whiteley, because who the hell can tell the difference anyway?

So the pieces are in place, now the movie can get rolling. The first half of the movie is largely the human story of Sam Witwicky, fresh off of saving the planet from demolition by the dastardly Decepticons twice in a row, now seeking employment in the D.C. area. His job search is hindered by the fact that he refuses to accept anything that doesn’t involve saving the planet, a job which most people have to work their way toward by climbing the corporate ladder. The love of his life from the previous films has unceremoniously dumped him, but no biggie because he’s already got a hot English mama who he is happy with because, quote, “She loves me for who I am.” Yes, I’m sure they connect on a deep emotional level. In any case, it is during this portion of the movie that Sam has to cope with a multitude of indignities. Things like: not owning an expensive car, being forced to do menial tasks in an office, and being referred to as a “messenger”. He is particularly hurt by this last comment, and feels that he needs to once again prove that he is a hero rather than a simple “messenger”. Hey Sam, we’ve all got our roles to play – none is more or less important than the next.

In any case, his quest for adventure is aided by the reappearance of those devious Decepticons. It seems that there’s this intergalactic bridge (Thor, much?) that those wacky mechanical beings had invented, the construction of which would allow for the transportation of material through space and time. The “time” part is given no thought whatsoever, though I imagined a Transformers chase through all of recorded history would be pretty bad-ass. Mainly the device is used for teleportation, and as anybody with half an evil mastermind will tell you, teleportation can be used for awful military applications like reconstructing the Autobots & Decepticons’ home planet of Cybertron. The Bridge is made of many metal pillars which are placed in particular points all over the world, the heart of the whole machine being a glowing red pillar which is placed on the ledge of a window in Chicago. You might imagine that, since there’s a long explanation about the importance of this red pillar, the good guys’ goal would be to somehow destroy that one pillar in particular. But oh, you’ve over-estimated our boy Bay.

I won’t give away what really needs to happen in order to destroy the Bridge and save the planet, but let me tell you about another plot point. One character is given a rocket launcher and told that there is only one bullet/rocket left in the barrel. Just one. It must be used to fire the shot that will save the day and win the war. It’s never discussed again. The giant robots spin and whirl and jump and slide all around, often in slow motion so that their actions look pre-ordained, as though they know in advance where any given piece of debris or flame will be. They easily move out of each others’ grasps, and the Autobots have the peculiar ability to punch straight through their enemies when it becomes necessary, a tactic their adversaries have yet to master. At one point, that lovable scamp Bumblebee is held at gunpoint by a Decepticon and… can’t… escape? Of course, it’s all a way for some of the other Autobots, who have heretofore been absent from the scene, to drop in dramatically and save the day. This tendency reminded me of some of the comments I made about Super 8, of the way that the characters are treated like pawns to be used and moved around when it is convenient for the story. It worked for me in Abrams’ film because that movie had the self-awareness to confess to being a movie and working in that manner. Bay’s film is utterly serious. A monstrous Transformer straight out of Tremors appears early in the film, but is totally forgotten about until it is needed to create havoc again near the finale. There’s no sense that this was done with any intent, like you’re supposed to forget about the creature and be surprised by its re-entrance; instead, it feels as though the creature was introduced solely so that it could appear later without being a surprise.

With all that said, the action is a little bit easier to follow. And the Autobot-Decepticon violence was awesomely graphic, as robot fights go. A lot of “blood”, which I guess was oil (although since they are technically living beings, it might have actually been blood). Characters are taken out execution style, body parts are sliced off and faces are blown away by gunfire. Optimus Prime in particular comes out looking like a stone cold killer, tearing out one guy’s spine after splitting his head open with a flaming axe, and straight up pulling a Dalton on another. Of course, a lot of human beings are killed in this movie too – some of them by implication (cars being thrown asunder on the highway), others right in front of our face. One woman is vaporized and her skull rolls along the pavement, but hey, at least Rosie Huntington-Whiteley gets out unscathed, her white pants completely clean at film’s end.

Altogether, Transformers: Dark of the Moon is a largely wretched exercise in mindless repetition. The fourth in the series could easily cull scenes from the first three films and call it new. As action goes, it’s fun but far from phenomenal; a summer blockbuster that gets down to the business of busting up the block, but not much else.

One Response to “Transformers: Dark of the Moon”