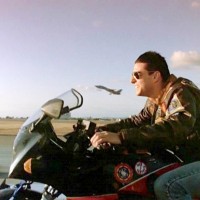 Have you ever had a friend who found out that you haven’t seen some monumental, life-changing movie from their childhood? “You haven’t seen [title]???” they say with a sense of shock and multiple question marks to denote extreme surprise. Or perhaps you’ve been the question-marking friend, finding out that somebody that you thought you knew has never seen Star Wars or whatever videotape you may have worn out as a child. It’s hard to imagine that there are people that have been living different lives from the one we’ve lived, who did not grow up in the same manner as we. I was just marveling last night with my wife that I grew up knowing about and enjoying the television program ‘Quantum Leap’, whereas she had never heard of it until we began dating. Sometimes when you return to these alleged classics, they find that same charm. But other times, if it didn’t figure prominently into your childhood, it’s hard to get on board. Such is the case with Top Gun.

I’m not going to get into the movie’s blatant homoeroticism, a facet of the film which has been pointed out by hundreds of thousands of wittier critics before me, except to say that it’s too obvious to have been accidental. One character tells another that he is getting a hard-on, and the second says, “Don’t tease me.”

As for the movie itself, though, it’s pretty uneventful. I fell for Rocky when I saw it in the last year or so, despite not having grown up with it. I found something to connect with in that movie, and it sold me on the character relationships. There is nothing so compelling in Top Gun. We follow the exploits of Maverick (Tom Cruise), an expert fighter plane pilot who doesn’t-go-by-the-book one too many times and, as a form of punishment, gets sent to and elite pilot training school where he will be taught how to, I don’t know, do magic flight maneuvers. In the meantime, he has a tepid romance with his instructor (female), semi-mourns the death of his co-pilot, and finds enough strength to forgive himself for being so rebellious and learn to rebel again.

To be sure, there are plenty of things about the movie that have worked their way into the popular culture – things I wasn’t even aware came from this movie. Whenever anybody feels the need, the need for speed, they are quoting this movie. Covering the word “b—shit” with a cough, brought to you courtesy of a Val Kilmer ad-lib. And though I can’t imagine what situation would lead anyone to say this phrase, I was fully cognizant of the line “Too close for missiles, I’m switching to guns” long before viewing this film.

But overall, eh, there’s nothing much remarkable or memorable here. The movie is ostensibly about fighter pilots fighting other pilots in flight, but the plane scenes are so chopped and difficult to follow that it makes Michael Bay (the poster boy for incomprehensible action sequences) look like Terrence Malick. That, combined with the fact that the “enemy” is nameless and blank, that the pilots speak in useless movie military jargon, and all that you have left is the essence of these scenes – namely, the idea that there are two planes fighting against one another and the good guys are probably winning. When not flying in battles, real or simulated, Maverick and his pals are on terra firma maintaining an aura of dashing bravery or simple jackassery. Kelly McGillis shows up as Cruise’s love interest, and she’s supposed to be a tough career woman who gets “paid to know more than” the pilots. But then she spends the rest of the movie fawning over how macho Cruise is and totally ignoring the moral dilemma of whether or not she should quit her job for a man.

A big deal is made about Maverick’s father, who embarrassed his son by disappearing over the Bermuda Triangle or something. What a coward! This leads to Mav’s deep-rooted need to prove that he is much capabler of doing his job than anybody else!!! Instead of a searing psychological profile of a man driven by the trauma of his father’s disappearance, though, Maverick appears to be positioned as a generic action hero, minus the action. He smirks and spits one-liners and knows no fear, but at the end of the day, he’s got no real accomplishments to show for it. The closest the movie gets to any actual action comes early on, when Maverick makes the risky decision to fly out on an empty tank of gas in order to save a friend who had gone insane during a flight. Beyond that, it’s just convoluted shots of aeroplanes zipping around or else cheaply cliche bouts of machismo between THE HERO and THE RIVAL.

One Response to “Top Gun”