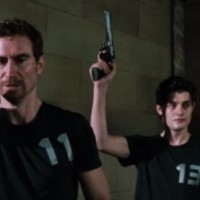 Mickey Rourke, Jason Statham, Michael Shannon, Curtis “50 Jackson” Cent, Ray Winstone, David Zayas (“Dexter”), Ben Gazarra, Alexander Skarsgard (“True Blood”). With huge names like these, you’d think that an action movie about a secret underground world of Russian Roulette would be a can’t miss. Alas, how quickly we have forgotten The Expendables: sometimes even the biggest names and the weirdest plot aren’t enough to save a miserable film. Sure enough, despite the built-in tension of its central conceit, the world of 13 is a stunningly bland one. It provides a fitting metaphor, however, and one which I might be wise to save until the end of this review but I’m gonna go ahead and let it loose right now.

The movie wants its audience to think about the one bullet in the chamber, but more often it pulls its trigger on those five rounds filled with nothing.

Let’s be honest, a secret world of rich people betting on the lives of men playing a complicated game of Russian Roulette, it sounds kind of awesome. When you find that Michael Shannon (Take Shelter, 8 Mile) is the man behind the game, and gives a suitably creepy performance it only makes it sound more enticing. Our hero Vince (Sam Riley) steals the identity of a neighbor in order to weasel his way into the game, never questioning the bizarre series of train journeys and blind-folded backseat car rides he has to take in order to get to a house out in the woods where they force him to disrobe and saw off the heels of his shoes. He’s willing to put up with all of this, you see, because he needs the money to pay for his father’s medical bills. This is mentioned in passing, if only to give the boy any sort of motivation at all. Donning the titular number, our boy Vince is thrown into a circle and given a gun. When the light comes on, pull the trigger, and the light goes out for some men in the circle. It’s like a vicious game of Musical Chairs, only without “The Macarena” playing on a nearby boombox.

While Vince tries to acclimate himself to his new surroundings, we get glimpses at the lives of the other big name actors as they play out their dumb subplots. Statham and Winstone play brothers, one who takes care of the business and the other who takes care of business if you know what I mean. How anybody could possibly make a living from this game is inconceivable to me; multiple characters indicate that having experience gives a shooter an edge, though I’m not really sure how that could be. It seems to me that when your number comes up, there’s not much that a “been there, done that” attitude can do to help rectify the massive wound in your skull. In any case, the relationship between these two brothers is so poorly built that a late-in-the-game sense of familial devotion on Statham’s part feels entirely out of character. Rourke is paired with 50 Cent for a criminally stupid subplot which involves a hidden cache of millions. Rourke puts on his twangiest Southern drawl to beg the rapper to save his life, and the story culminates in an idiotic series of double-crosses that makes no sense at all. As for the two television personalities – Zayas and Skarsgard – their involvement is so limited and insignificant that their roles might as well have been cut altogether.

What really hurts 13‘s chances of success, however, is that it doesn’t know how to maintain the atmosphere it’s searching for. I’d like to say that it’s not necessary to show brutality on-screen in order for film violence to be effective, but in the case of this movie that’s not true. When a man gets shot at point-blank range in the back of the head, it’s accompanied by a tinny pop from the gun and the man flinging himself forward like a buffoon. In one of the most cruel moments, a man survives the round despite being shot in the back of the head – a doctor views the wound, but the rules of the game state that the man must be eliminated from the game nonetheless. My wife was confounded as to why they would shoot the man again. “He seemed fine!” she exclaimed. Well dear, that’s only because they either didn’t have the budget or the foresight to realize how unreal the characters’ deaths are. So when the crux of the film – the forced murder game – comes across as silly, the hand-wringing of the bit players involved in the action becomes ridiculous.

Given that this is a remake of a French film called 13 Tzameti, and that both films were directed by Géla Babluani, it’s unthinkable that this came out so badly. There’s no feeling of fear or dread during the interstitial times between the rounds of the game, partly because we have no reason to root for the alleged hero of the piece. If he dies, which he won’t because who kills off their main character before the final battle (if then, even), but if he did die, why would we care? We are given little reason to identify with Vince aside from the fact that he has a family and because he is a human being. Maybe we don’t have to identify with the protagonist, but what we do need is to have some interest in his fate, or the fate of those players in the B-stories. Because the film fails to grab our interest in any way, there is nothing at stake. Think of the “ear” scene in Reservoir Dogs: it pumps so much nail-biting anxiety into the room because a) we know that Mr. Blonde is a sociopath from prior experience with the character, and b) we don’t know how far the movie will go. In contrast, we immediately know how far 13 will go, which is to say not very. There’s no surprise.

So much of the movie expects the viewer to be on the edge of their seat waiting for someone to flick a lightbulb on. I can imagine another movie where this could work, if the film made me fear the lightbulb first. 13 wants me to be afraid just because the lightbulb has a spider painted on it. The movie’s got five rounds of nothing, yeah, but even the live round is a blank.