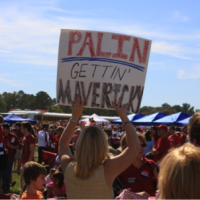 I feel like there’s a good movie to be had from the story of vice-presidential candidate Sarah Palin, who found national celebrity for fifteen minutes then faded back into relative obscurity. Her name simmered at a low boil while the nation wondered whether she would re-emerge vying for the 2012 Republican presidential nomination, but I think waiting for a second encore is wasted effort at this point. Still, her story is an intriguing one; in fact, it is The Undefeated itself that makes that clear. Once hailed as a forward thinker who stood up to the leadership of her own political party, at one point holding an astonishing 80% approval rating as the governor of her home state of Alaska, how did Palin flail around so miserably on the national stage, ultimately resigning her position in disgrace and milking the fleeting moments of fame on reality television? If the subject had been approached from a historical, rather than a political perspective, it might have actually worked. Palin is an enigmatic and charismatic personality, there can be no doubt. Instead, the film is a jittery two-hour advertisement, painting her detractors’ incrimination as totally baseless and ultimately failing to tell its subject’s story by making the conscious choice to limit its scope.

Let there be no misconceptions, however: there is no way that director Stephen K. Bannon’s The Undefeated could have ever been any good. That judgment has nothing to do with its subject or its in-your-face political slant, but instead because it was seemingly constructed by someone with no talent for filmmaking whatsoever. To begin with, there’s the overbearing score which crashes triumphantly throughout – and I am not exaggerating in the slightest here – the entirety of the run-time. In some of the softer spots wherein the movie gives the viewer a picture of Palin as saintly, the music may change to an angelic choir’s hum, but for the most part it’s a blustery, pounding mix of cymbals and trumpets. Bannon doesn’t seem to understand the medium he’s working with at all; even scenes that one might expect to be more down-to-earth, staid interviews about Palin’s policies and spirit conducted with friends and comrades, are edited in jagged and absurd ways. While an interviewee speaks candidly, the camera jostles around – zooming in and out randomly, cutting to different shots of the same person, changing to black and white and then back to color. It’s as though Bannon and cinematographer Dain Valverde didn’t have enough faith in the material being compelling, so they tried to jazz it up like college students throwing ClipArt and motion on every page of their PowerPoint presentation. It comes across as not just bad, but stunningly awful.

I think the average shot-length is about four seconds. Remember: this is a two-hour documentary. Augmenting the interviews and video of Palin as mayor of Wasilla, governor of Alaska, and eventual vice-presidential candidate, various shots are inserted to add depth to the words being spoken aloud. It’s not enough for somebody to say that the state of Alaska had been flushing money down the drain, you really need a brief shot of dollar bills being literally flushed down a toilet to drive the point home. When the people on-screen talk of the vitriol the haters spewed, cut to a scene of a crowd yelling angrily. But sometimes, and as the film continues this becomes much more prevalent, these inserts become far more metaphorical and sometimes do not seem to have any relation to the words being spoken whatsoever. When discussing the state government’s prior failures to heed the demands of the people (this was before Palin swooped in and saved the day), we cut to a man in his mid-twenties, working at a call center, playing air-drums excitedly at his cubicle. It’s brief, but disarming. What? Most memorable to me, however – and I had to rewind the film to make sure I hadn’t hallucinated this – comes when nothing of any particular note is being discussed and yet the scene changes only momentarily to footage of a man walking down a long hallway toward a security camera in the foreground. Behind, a woman in a frightening bird mask looks around the corner at the man, who turns around suddenly as she ducks out of sight. Again, this lasts mere moments.

Which leads to a larger question: did these hundred or so cut-scenes come from a video library, or did Bannon film each 3-5 second clip separately? Though my gut says they’ve been shepherded from a larger catalog, the fact that they are all of about the same video quality suggests the possibility that they may have been individually shot. Be that the case, how would Bannon have done it? Did he come up with a laundry list of vaguely metaphorical images – two businessmen shaking hands with weapons hidden behind their backs, for instance – and then sort them out after the fact? Or did he know in advance where in the film he wanted the CGI shot of a volley of arrows hurtling toward the screen to arrive?

For those looking for a laugh from Palin – notorious for her numerous gaffes when in the spotlight – there’s really not much to see here. Aside from a confusing moment when she says that she signed a bill at her kitchen table “where most significant events of my life take place”, there’s little to poke fun at. In fact, she comes across as intelligent and committed to both her ideals and the state she loves. I suppose a lot of that could be political posturing: the movie goes out of its way to show her resignation as governor as a sign of Palin as martyr for the greater good, when in fact she had overcome similar opposition earlier in her career without standing down. Still, I keep returning to the many bipartisan efforts she instigated in Alaska to strengthen the state’s economy, and the surprising turn of events that changed her from small-town personality to a woman taking on the entrenched, potentially corrupt government leadership in that wild land. Blaming her fall entirely on liberal bias is a cheap scapegoat. The liberal elite didn’t turn her into a mush-mouthed mess when the cameras came on. What happened?

The Undefeated is much too interested in simplifying her life and deifying Palin as the progenitor of the TEA Party movement to consider the genuinely intriguing drama that is Palin’s story. The sloppy, chaotic filmmaking only adds insult to injury. Therefore, whether you love or hate Sarah Palin, I think we can heal this country’s political divide long enough to declare without partisanship that The Undefeated is, in the end, a relentlessly terrible movie.

One Response to “The Undefeated”