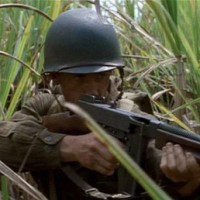 Early on in The Thin Red Line there is a scene that is remarkably similar to Spielberg’s Saving Private Ryan, which came out the same year. The scene involves a large group of young soldiers, many of them unprepared for battle, being carted by boat to an enemy shore. I spent a lot of time musing over the difference between the two movies with regard to that scene. It was thinking about that which made me really like The Thin Red Line at first, but my excitement quickly waned when it became clear that those sorts of thoughts are not what the movie is interested in.

I haven’t seen the SPR version of the scene enough times to recount it exactly, but I seem to remember the moment being cut short by the sudden whizzing of bullets and then the graphic sprays of blood and guts. In director Terrence Malick’s film, the moment is much more muted. We hear the waves splashing on the side of the boat, we sit in frightened silence with the recruits… waiting. We, the audience, knew what to expect when watching the storming of the beaches at Normandy (even if we were unprepared for the explicit nature), but here we don’t know what to expect. So I was enthralled by that tension; when the soldiers then press on through the jungle, the tension does not recede. At any moment, all hell could break loose. The boys are living with the possibility of being killed at any moment: how do you live like that?

With that in mind, the first major plot point is the strongest. A group of soldiers led by Capt. Staros (Koteas) are ordered to attack and gain control of a bunker on top of a hill by Col. Tall (Nolte). In voice-over narration, Tall talks about how much ass-kissing he had to do in his career to get to where he is now; when the situation becomes unmanageable near the bunker, he has to figure out how to be a leader. Whether he does that or not is up for interpretation, but the rapport that Staros and Tall build while trying to discuss the situation makes for an incredible story. Meanwhile, bullets are flying and people are dying. We don’t see intestines spilling out of ruptured wounds, but that does not make the violence any less horrific. The camera stays low to the ground with the soldiers, brushing through the grass as though we the viewers are actually there. It’s not hard to relate, to feel yourself as part of the action, to be fearful as though you were there alongside the soldiers.

This sense of realism is betrayed by Malick’s intent on making the film a philosophical thought experiment on the dualism of nature, the problem of good and evil, whether there is one force or two at work in the universe (why limit it to one or two?), etc. In his review, Ebert described the movie as “a film in the act of becoming, a field trial, an experiment in which a dreamy poet meditates on stark reality.” There is a lot of narration, a lot of thoughtful questions about why men wage war against one another and whether we are all just dirt. On IMDB, Rajiv Kapur reviewed the film and pointed out many instances of symbolism – the film is fairly riddled with symbols – “the crocodile entering the green algae covered water, the native man who passes the company after they land on the beach (walking in the opposite direction apparently oblivious of their presence), the tree being choked by parasitic vines, the bird being born as a soldier dies, dogs eating a human corpse…”

The movie didn’t need it. It’s a nearly 3-hour movie, cut down from nine, cut down from twelve, cut down from twenty. Did Malick really think that the film needed nine hours in order to say what it needed to say? And what did it need to say? Ebert contends that Malick doesn’t know where he is going or what he is saying, but spends a lot of time in his review of the film ruminating on the possibilities. “Any film that can inspire thoughts like these,” Ebert concludes, “is worth seeing.” I’ve said very similar things in many of my past reviews. The difference is that the movie didn’t inspire thoughts like those in me, they inspired thoughts like those in Ebert. Which is fine. The light that goes on in the brain can be lit by different things for different people.

In my case, I was rapt with attention from those early, quiet scenes. As the movie progressed and began showing its true colors, I lost interest. By some of the later scenes, even though the war was continuing around the boys, it had lost it dramatic punch. The deaths that took place then were less terrifying and more typical. In addition, yes, it’s true that the characters are not well-developed. Without the benefit of subtitles, I’m not sure that I would have been able to name a single character. They are all covered in mud so as to be unrecognizable and although a few have some kind of back-story going on, their personal troubles are undermined by the film’s focus on philosophy over personality. A big deal is made about a burial in the third act, but at that point it is difficult to care about the character or understand why any of the other characters would be particularly moved by this loss (as opposed to any of the other casualties).

There are certainly some great things about Malick’s film. The cinematography is, of course, often gorgeous. I’ve already mentioned the way the camera moves through the tall grass with the soldiers, and there are times when the changing light from clouds adds an extra dimension to the realism of the scene – a lot of other movies would try to avoid those sorts of real-life alterations in the lighting of a scene, but this film revels in it. On the other hand, there are times when the action is muddled and it is difficult to tell what exactly is going on or where anybody really is. Watch a scene which begins with a thick fog: by the time the fog clears, it is nearly impossible to tell what has happened physically in the area – it’s just a lot of extras jumping around to form what looks loosely like a battle. There are some aching moments (e.g. Capt. Gaff’s inability to respond the way he would like to when Tall refuses the men water), and then there are lame and intrusive moments (e.g. Welsh talking about not being numb yet).

Altogether, I’m disappointed with The Thin Red Line. I am up for philosophically thoughtful works, but the movie failed to engage me in that manner and unfortunately lost me on a dramatic level as well. I was prepared to enjoy this movie, and it regrettably let me down. Part of that may be in the fact that I was looking more for those quiet moments of the first act than for the symbolism or broad philosophy of the later segments. But I think a large portion of the blame rests on Malick’s shoulders as well. Given the knowledge that the film was cut down from much longer versions, it seems clear that he was unable to carve out any true direction toward which to drive the film.

It’s an ungainly work. It walks, but it steps on its own feet.