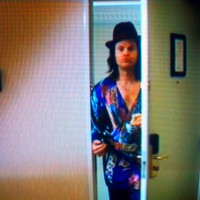 There was a brief time when I thought that I was really going to like The Rocker. I was getting into the movie’s groove in the opening scenes, as Robert ‘Fish’ Fishman (Rainn Wilson) is shown playing with his band Vesuvius in 1986, then becoming some kind of immortal zombie filled with rage when the band heeds the call of dollar signs and ditch him. But I was still sober enough to wonder why, if these people were truly friends, they would not simply give him a portion of their earnings in order to strike a compromise between the record label that wanted him out of the band and the brotherly love they felt for their bandmate. I guess you don’t stop to consider your options in the heat of the moment.

In any case, as mentioned, I was really starting to get into the spirit of the film as each successive cameo came into focus. In particular, a brief odd appearance by Jane Krakowski, followed immediately by Aziz Ansari. I began to wonder if this was the love-child of all of NBC’s current Thursday night line-up, and I began to approach the film in a different way. As a movie, it seemed too off-the-wall and fueled by improvisation to remain bearable for the runtime of a feature-length film. But when I started to think of it less as a film independent of the multitude of shows that seemed to have spawned it – provided that we’re able to agree that it’s possible for current shows to go back in time and create this movie before the shows themselves existed, a belief that I personally have no trouble accepting – and began to think of it more as a very long episode of “30 Rock” or “The Office”, I became more forgiving of the misses and the trying too hard. I began to think of The Rocker as a pretty good episode of one of the shows I like to watch, rather than an awkward mash-up of strange ideas.

That is, until the kids came in. After Fish gets kicked out of his band, he becomes an office drone and stops playing the drums. His nephew Matt has a garage band, though, and they’re looking to get a gig playing the high school prom which leads them to turn to our hero the rocker to help them get by. Though there is some initial misunderstanding, through a series of inexplicable events, the band becomes a success. The kids are altogether lifeless, including actress Emma Stone. Stone later made a name for herself by bringing confidence and charisma to her role in Easy A, but here is good for little more than a quip or two. The lead singer Curtis bonds with Fish in some ways because his own father ran out on the family, but the partnership isn’t explored very well. And Matt, well, his existence seems to be primarily as a catalyst for getting his uncle into the band; beyond that, he fades into the background. In fact, due to his uselessness in the band and movie, I predicted that the record label would ask that Matt be removed from the band in a totally brilliant parallel to the events which transpired in 1986, thereby putting our hero in the same situation but now on the other end of the trigger. Alas, it was not to be. What actually happens is somehow less inspired than my guess.

This is not to say that I hated The Rocker, lest you’ve gotten that impression. There are a multitude of funny one-liners, such as in an early scene where Fish berates a musician for using drum loops, calling him “Moby…Dick”. Another great moment comes from Matt, actually, as he begins to yell at his mother but first scolds himself: “Lower my voice!” In addition, there are some entire scenes which have been sharply constructed. An attempt at crowd-surfing in an office environment is particularly funny, an artistic music video shoot, and one particular moment when the creepy talent agent (Jason Sudeikis) takes all the air out of a room by forgetting that he is dealing with children. But then there’s a scene that goes beyond the boundaries of good taste, as when Fish pours vomit into his pocket for luck. The most unforgivable mistake of the film, however, is when our intrepid rocker mangles Peter Gabriel’s “In Your Eyes”, a move akin to Sinead O’Connor ripping up the Pope’s picture on “Saturday Night Live”. Such disrespect!

But really, it’s not that the The Rocker was so offensive or distasteful for me that I found myself loathing it. It’s not nearly as awful as, say, Step Brothers or Death Race. What makes the movie a disappointment is that it leaves its go-for-broke comedic sensibility after the prologue, settling into a more comfortable routine comprised mostly of single-line jokes. This, too, would be easy to see as mostly enjoyable if only there were any reason to care about the characters themselves or what happens to them. The closest the film gets to any real sort of character growth involves the shallow romance between Curtis and Fish, the former searching for a father and the latter seeking to evade any human responsibility. Their story follows the beats of any rom-com, but there is a surprisingly effective moment where the two seem to connect: Curtis writes the lyric “I’m so bitter”, but Fish salvages the song by pepping it up as “I’m not bitter”. It’s cute, but this is really the deepest the movie is willing to go in search of genuine emotion. It comes down to Fish telling his young leader to just be happy and Curtis begrudgingly agreeing to try.

I remain annoyed that The Rocker felt obligated to conform to some standardized idea of what a movie of this kind must be, complete with by-the-numbers story beats which are entirely underwhelming. If the movie had put its focus into enacting a series of ever stranger skits, it may not have been consistently hilarious but would have nonetheless been more enjoyable simply for being less predictable.

One Response to “The Rocker”