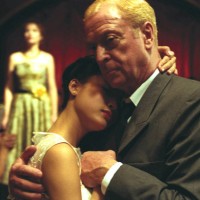 For a movie set in the throes of war in Vietnam circa the early 1950s, The Quiet American is curiously low-key. That’s not to say that there aren’t a handful of action-packed sequences, but the majority of the plot doesn’t involve characters running through the jungle, ducking bullets and fearing for their lives. More often than not, the sound of grenades blasting in the distance is the only reminder that a war is taking place at all. In one sensational scene, the exploding of bombs grows ever closer as a young aid worker named Alden Pyle (Brendan Fraser) calmly tells his friend, reporter Thomas Fowler (Michael Caine) that the two are in love with the same woman. The bombs are both real and not, a violent encroachment on the lives of these two men as a matter of fact, but also a well-wrung metaphor displaying Fowler’s agitation.

He doesn’t yell, though. It would be easy to tilt the symbolism that way, to highlight his rage with the flash of machine gun fire. It’s not a love triangle at all; the film frequently forgets that the girl, Phuong, is even human. Instead, it focuses on the back-and-forth between the two friendly rivals. When one thinks he’s dying, he tells the other, “If I had died, you could have had her.” She’s less a person than a prize, but when the film does give us Phuong’s perspective it mostly relates to what she can get out of her suitors. Her friends snag French boyfriends with hopes of being taken to Europe. So the story largely concerns the civil battle between Fowler, who has been with Phuong for two years (despite having a wife back in London) and Pyle, who has just arrived and learned that there is such a thing as “love at first sight”. But though the two are rivals in this respect, they’re nonetheless friends. “We can disagree but still be friends with one another, can’t we?” Pyle asks. So the younger man approaches the older to ask for his blessing in the courting of the girl. Fowler is bitter, but he doesn’t yell.

The gentlemanly tack makes for a subtle and intriguing film, yes, but also lends to its less than engaging political intrigue. Attempts to weave in a detective story about the role of differing factions in the continued violence in the area comes up with less than desirable results. There’s hints at corruption and possible double-crossing and muddled motivations, but since this takes a backseat to the romantic antagonism between the two men the weight of the information is lost. There’s a series of newspaper clippings shown at the end of the film (spoiler?) to remind the audience about the tailspin that the Vietnam crisis fell into in the coming decades, but this capstone feels superfluous. The movie wants to be about the larger issue of the Vietnam War at the last moment, when everything prior had been largely a much more contained story of a few primary characters.

When the film recognizes its goals is when it is at its best. Michael Caine, of course, is excellent. More surprising, perhaps, is a great performance from Brendan Fraser. Fraser’s contributions to cinema don’t extend far beyond the breezy action of The Mummy series of films, so one could be forgiven for entering with low expectations. Here, the actor holds his own and plays the sharp edge between earnest naivete and polite cunning masterfully. The strength of the actors likely contributes greatly to the pull of the smaller story – the affection that the two men feel for one another, mixed with their mild resentment, that’s a powerful set of feelings well worth exploring and remarkable to see personified by actors who can handle the material. Stunning cinematography capturing true-to-life images of Vietnam, color-corrected to an almost sepia tone, help sell the nostalgic and personal atmosphere (tied together with past-tense narration from Caine). It all comes together to make for an unexpectedly mature film where no one person is the ‘good guy’ or the ‘bad guy’, and where each character’s ethics comes in shades of gray.

But then there’s this spy story, with the simmering tension between the Communist part and the French occupying forces being disrupted by a third force which seeks to move the country to action. Without giving this narrative a proper focus, the viewer is uncertain how to take the meeting that Fowler has with the newly minted General Thế. Is this meeting likely to be dangerous for Fowler? How does the General’s response to the reporter’s line of questioning fit into the larger story of the Vietnam crisis? It’s unclear. The closest that this plot-line comes to gaining greater resonance with respect to the human story beneath is in the contrasting opinions that the protagonists hold toward fighting on a broad scale versus their personal struggles. Pyle, for instance, believes in honor so greatly that he meets Fowler in the midst of a militarized zone in order to properly discuss their shared desire. Does this belief in pure honor extend to the political turmoil facing the country? Fowler likes to imagine himself a dispassionate observer, but he clings fiercely to his adoptive homeland and the woman on whom he’s come to rely.

So I guess there is some usefulness to the broader story in that it helps to define, or more accurately to reveal greater intricacies in the identities of its main players. That, I appreciate. If the characters themselves are the bread, the shifting winds of their politics both internationally and interpersonally is the butter. The web of deceit and murder most foul is a well-intentioned attempt at toasting the whole thing to a crispy, golden brown. This only works partially, leaving the edges charred black and difficult to eat around. There’s a lot that The Quiet American does well, but it stumbles through areas where it ought to maintain better footing. It tries to present itself as greater than it is and consequently sells itself short. When the film plays to its strengths, it’s a revelation; decidedly uneven when aiming further.