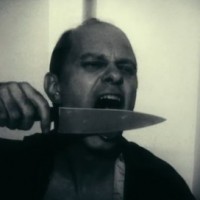 I feel compelled to defend the off-the-wall darkly comic thriller The Perfect Host because it gets a lot of bad press on the grounds that it’s bizarre for the sake of being bizarre, or rather: it’s bizarre without reason. This is different than the hyper-literate musings of Rubber, mind you. This is a movie that functions as though the plot was being provided as the film progresses, twists piling up not as legitimate turns in the story but instead as wrenches in the gears. I don’t know, maybe that does make it a bad movie. The absurdity reaches a fever pitch in the final act, and if you’re not willing to roll with the punches it’s easy to see how you might be left feeling less than satisfied.

But come on. If you’re not firmly involved in the movie by the time that Rupert and Roman show up for dinner, I’m not sure what can be done for you. Let me give you the widest arc to the movie, just because if I don’t describe it to some degree it will be difficult to continue this review. A bank robber (Clayne Crawford, Wristcutters), trying to elude capture, finds himself in a gaudy Los Angeles neighborhood and decides to lay low in one of the upscale neighborhood houses. Rifling through the mailbox of one such domicile, our robber John gains enough knowledge to pretend to be a friend of a friend and cons his way into the home of the flamboyant Warwick Wilson (David Hyde Pierce), just getting everything set up for a dinner party with friends. When John finds that one of these friends is a district attorney, then hears word on the radio of the manhunt already underway, he drops the ruse and takes Warwick hostage. It’s just too bad that he wasn’t aware that Warwick himself is a deranged killer!

The unlikely coincidence that a fugitive from the law would stumble upon a madman’s evil lair is difficult to accept, but compared to what’s yet to come it’s fairly mundane. As Warwick keeps his hostage tied to a chair, the party heats up – raging well into the early morning hours. What keeps the film from going totally off the rails, or perhaps more accurately what makes it so exciting despite the fact that it loses control and careens off of a cliff remarkably early, is the go for broke performance of David Hyde Pierce, which I think can be most accurately described as batshit insane. The man’s performance in this film is over-the-top in all the right ways, easily swinging the pendulum from lovable dinner host to bonkers sociopath to cool bravado over the course of the film. Given the limited sets (the bulk of the film takes places inside Warwick’s house), some critics have noted that the film might be better at home on the stage, and certainly Pierce’s expressive style – not what you’d expect if you know the man primarily as Niles Crane – may be more fitted for that venue.

Because in theater, you act outward far more often than you do in film, a largely inwardly-emotional stage. You can’t get the same heft of emotion from a furrowed brow on Broadway that you can in a close-up with sweeping musical score in film. I think that contributes strongly to the film’s manic energy, and even supporting actor Crawford takes the cue and comes out swinging. There’s a particular scene where Warwick knocks over his captive, still bound to a chair, and drags him into the living room to watch home videos. It would be enough to show the host treating his guest so roughly, but Crawford kicks it up a notch by allowing his head to bump along the floor violently. It turns what is already amusing into something incredible.

But the limited sets and the limited action are part of what has made this review a difficult one to write, not to mention the wicked turns I’ve been trying so desperately to avoid discussing. I tend to agree wholeheartedly with John Anderson from the Wall Street Journal, who says, “The less one knows about this perverse thriller from debuting director Nick Tomnay the better; a full appreciation of its delights lies in its revelations.” Anderson was cunning – he limited his review to less than 130 words. After all, how do you describe a movie without describing it? Tomnay’s directing is intriguing but overall not enough to bring to the forefront of the conversation. Once again, the limited sets don’t give the director much to play around with, cinematographically speaking, though there are some occasionally striking images. And though I personally enjoy the madcap plotting, what’s not a spoiler is too rote to do much with.

So let me give it to you straight, because I think I’ve said everything that I can. The Perfect Host is a weird movie. I’m not sure that it’s much more than that, honestly. For some, this is a make-or-break thing. The movie makes no apologies or justifications for the way it unfolds, and sometimes that’s unfortunate. What happened to John’s foot? We’ll never know. I’m of the opinion that the wild uncertainty of the film makes it a real treat rather than merely a frustrating oddity. It doesn’t care whether what happens makes sense, and it’s secure in that fact. The AVClub (the only film criticism website I read regularly) ran a feature for some time where forgotten films were viewed and given one of three labels: Failure, Fiasco, or Secret Success. I suspect that many who view this film will give it the second label, but to my mind it’s a success. Not a resounding success, not the kind that makes you take to your roof and shout the good word to the neighborhood.

A secret success. A success that depends entirely on the viewer being in the right frame of mind, being willing to go along with for the ride and not ask questions. I suppose you might call The Perfect Host a light film, insomuch as it doesn’t strive to make any deep points about the human condition. What it does reach for is 93 minutes of unabashed, absurd thrills. If the movie does fail, it fails spectacularly – I’d like to see more films fail so well.